A Web of Innovation 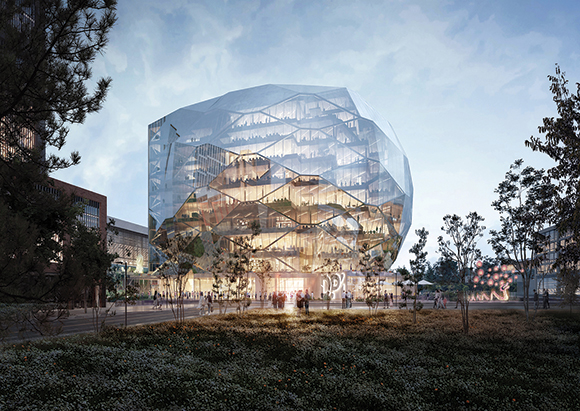 DPI’s planned headquarters on Chicago’s Near South Side.
Source: dpiuillinois.edu
by Gary Daughters

An ambitious thrust for statewide innovation is being pushed across the finish line through the overwhelming support of Illinois Governor JB Pritzker, who is powering forward with the $1.2 billion Illinois Innovation Network (IIN) and its primary hub, the planned Chicago-based Discovery Partners Institute (DPI).

“The Discovery Partners Institute and Illinois Innovation Network are launching a new era for Chicago as an extraordinary focal point for an unparalleled tech workforce and research and development center that will attract talent to our state from around the world,” Pritzker said in November, 2020, as he announced initial funding totaling $142 million for DPI’s Chicago headquarters and IIN projects on five public university campuses.

Together, IIN and DPI are designed to develop, attract and retain talent, providing a hive of technological research and innovation that combines the power of students, faculty and companies to enhance Illinois as leading tech destination. Targets for innovation include computing and big data, advanced materials, food and agriculture and bio science and health.

Citing an economic impact study conducted by the Boston Consulting Group, the governor’s office says the initiatives are to create or fill 48,000 new-economy jobs over the next decade, with an expected economic impact of $19 billion over the next 10 years, a return of nearly 40 times the original state investment.

The $250 million permanent headquarters for DPI has the potential to establish a futuristic landmark on the evolving skyline of Chicago’s Near South Side. Suggestive of Amazon’s “Spheres” in Seattle, the sustainable, multi-story, semi-dome of glass is to house up to 90 faculty and 1,800 students each year when fully operational. More than 30 design firms competed for the job, won by Dallas-based design and consulting firm Jacobs and OMA-AMO, an architectural firm in the Netherlands.

“DPI will operate the facility upon completion to catalyze the formation of an innovation district and connect to neighborhoods, schools and community organizations,” said a statement from the governor’s office. “The facility will anchor an entire network of innovation hubs that connect great universities, national labs, companies and schools around the state and beyond, creating an unparalleled innovation ecosystem.”

DPI is to form a crucial component of “The 78,” a $7 billion, 62-acre mega-project by developer Related Midwest that’s to include retail, hotel, restaurants and up to 10,000 new units of housing along the Chicago River, south of the city’s South Loop.

Curt Bailey, president of Related Midwest says The 78 will drive economic growth for the entire city.

“The 78 is the perfect home for the Discovery Partners Institute,” says Bailey. “It is a blank canvas in the heart of the city that will allow the University of Illinois System to create a global technology-based research institute downtown to attract and meet the demands of next generation leaders.”

Such dynamism doesn’t occur in a vacuum. Illinois’s 12 public research universities form the backbone of a higher education roster that knows few peers. As the nation’s third-largest producer of computer science degrees, the state has a serious case of the smarts. More than 150,000 students graduate each year from one of the region’s 200-plus colleges and universities.

“We have more universities in Chicago than any other city, other than Boston.”
— Howard Tullman, a scion of Chicago’s technology scene, having served as
the long-time CEO of 1871, the famed Chicago technology incubator.

“We have more universities in Chicago than any other city, other than Boston,” says Howard Tullman, a scion of Chicago’s technology scene, having served as the long-time CEO of 1871, the famed Chicago technology incubator.

“It’s really the talent flow here in Chicago,” says Tullman, “that helps us build the startups.”
Illinois’ more than 200 higher education institutions include some of the top colleges, universities and graduate programs in the nation. The private University of Chicago ranks ninth in the world in the 2021 QS World University Rankings. Engineering programs at Northwestern and the University of Illinois-Champaign are among the tops in the nation.
Esteemed, federal research institutions in Illinois include the Argonne National Laboratory and Fermilab, both of which specialize in quantum supercomputing, and the USDA National Center for Agricultural Utilization Research in Peoria.