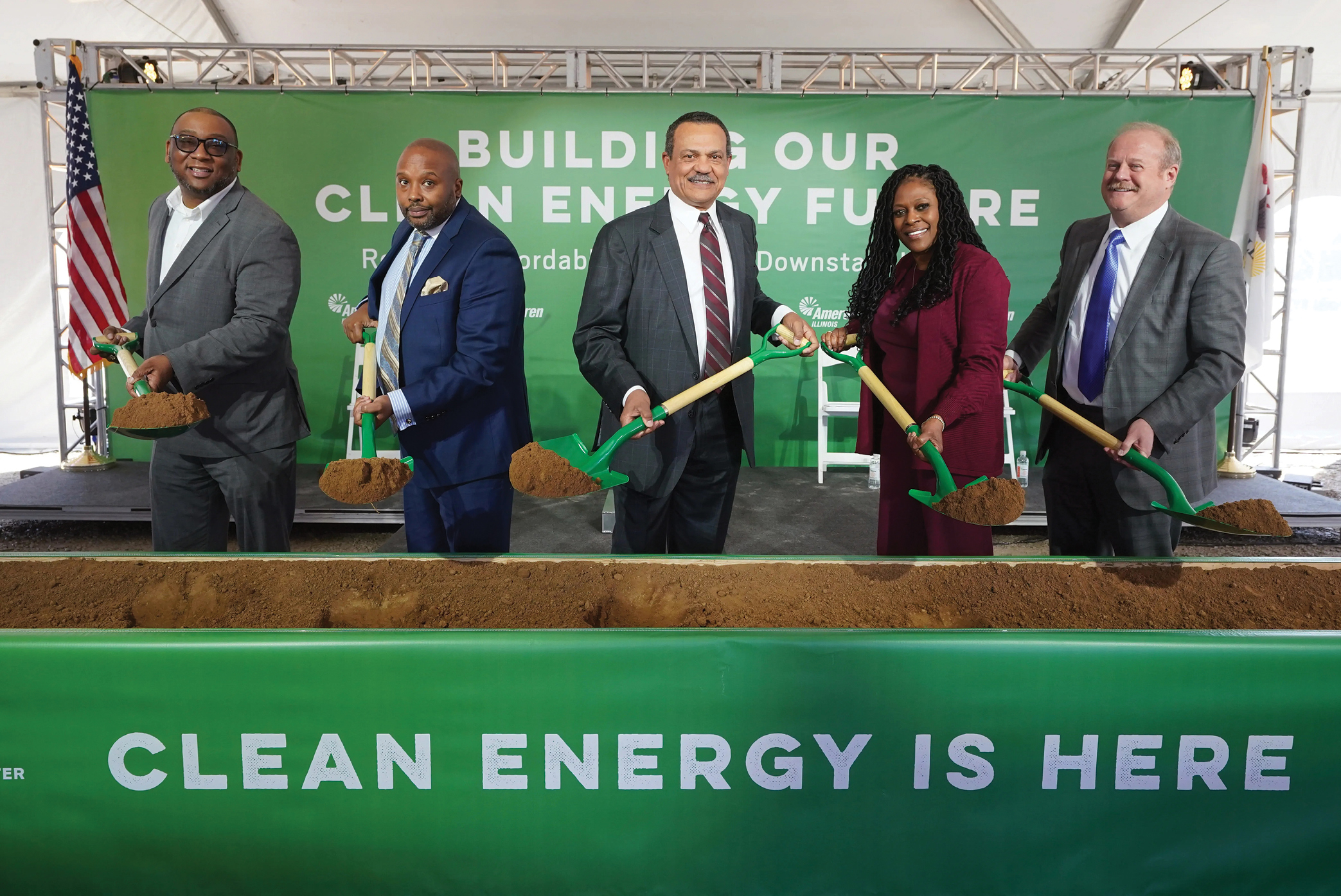 Above: Ameren breaks ground on the East St. Louis Solar Energy Center in March 2022, and is expected to begin operation in early 2023. The $10.2-million project will produce 2.5 megawatts of electricity for Illinois on a 17-acre grid. It is the first clean energy facility in the region and will bring in 50 construction jobs with a 27% diverse labor participation.
Photo courtesy Ameren
by Anna Reuter
W

hen it comes to solar power, looks can be deceiving. In a typical December, Chicago can expect to receive around 107 hours of sunlight, or a little more than one-third of the hours it’s graced with in July. Despite that, solar power flourishes throughout the state.

Illinois ranks second in the Midwest for solar output, and solar installation trends have seen a huge uptake in the past three years. With numerous programs aimed at transitioning the workforce into solar jobs, the state is poised for this number to continue to grow.

In the 2019 Top Illinois Solar Contractors guide, companies primarily served commercial and residential needs, without any substantial numbers put forward for utilities or the commercial and industrial market. That same year the top company, Continental Energy Solutions (CES), installed a mere 7,283 kilowatts of solar power in the state. In 2021, CES more than tripled the number of kilowatts installed, and even with that substantial push, they were easily toppled by new competitors. The top performer in 2021 was California-based RP Construction Services, having installed 162,157 kilowatts in Illinois alone.

What accounts for the huge expansion of this business across the state? Notably, a shift away from small residential projects, although those numbers are rising too. Commercial and industrial projects sat first chair in the solar economy in 2021, and the number of projects completed, jobs created, and dollars raked in is about to get substantially bigger.

In October of 2021 near Springfield, the Sangamon County Board passed the Double Black Diamond Solar project, approved at $535 million. The solar farm is managed by Boston company Swift Current Energy and is expected to create 1,000 new jobs and begin construction at the end of this year.

Even with commercial and industrial installations claiming the spotlight, community and residential solar still contributes significantly to the economy. Despite the dip in interest in 2021, the state is already expected to install 8,400 rooftop and community solar projects by the end of 2022. Solar companies are nudged along by groups like Illinois Solar for All, which focuses on making solar installations more affordable for low-income renters and homeowners.

After the Climate and Equitable Jobs Act (CEJA), the group increased funding from $10 million to $50 million per year. In May of this year, Market Watch reported that the average cost of a 5-kilowatt solar panel system (the average for a residential system) in Illinois after tax credits was $10,113. For RP Construction Services alone, that would be over $300 million in the state for 2021.

Solar has established itself in Illinois, and the longevity of the industry will pump life into the heartland for decades to come.

Due to Illinois’ standing as an innovator in clean energy in the region, clean energy jobs far outpace fossil fuel jobs. In 2019, Clean Jobs Midwest reported that clean energy employed more than 120,000 people in Illinois, with most of these positions being in energy efficiency, focusing mostly on the implementation of new technology. Renewable energy generation employed about 17,000 people, with wind being at the forefront, just ahead of solar.

These numbers have been growing since 2016 with the enactment of the Future Energy Jobs Act. From 2017 to 2021, there were three major clean energy job programs: Solar Training Pipeline Program, Craft Apprenticeship Program, and Multi-Cultural Training Program. ComEd oversaw the disbursement and management of funding to these programs, which then partnered with their own schools and companies to implement them.

Diana Sharpe, vice president of Economic and Workforce Development at ComEd, described some of the reasons clean energy jobs have increased in the past five years. “The awareness increased as we, as a society, as a state, really started to talk more about what we want to do, what we want to be when we grow up,” she said. “How do we make sure we are impacting the climate positively and bringing clean energy to the forefront?”

Although CEJA was initially deemed demanding, its investment in the labor force only helps to secure the state as a great pick for the companies of the future. The programs help get businesses on board with changes since there is demonstrated success.

Sharpe also described how in the past, most of the training programs had been run within the Chicagoland area, and that’s expected to change going forward, particularly as solar installations shift into bigger projects in more rural areas of the state. The administration of the workforce programs is transitioning into new hands and will be run by the Illinois Department of Commerce and Economic Opportunity going forward.

This transition coincides with a huge kick up in investment. Previously, the programs operated on a budget of $30 million divided between the partners for 12 years. Now, CEJA will ensure an investment of $180 million annually across its programs.