The Shape of the Cloud 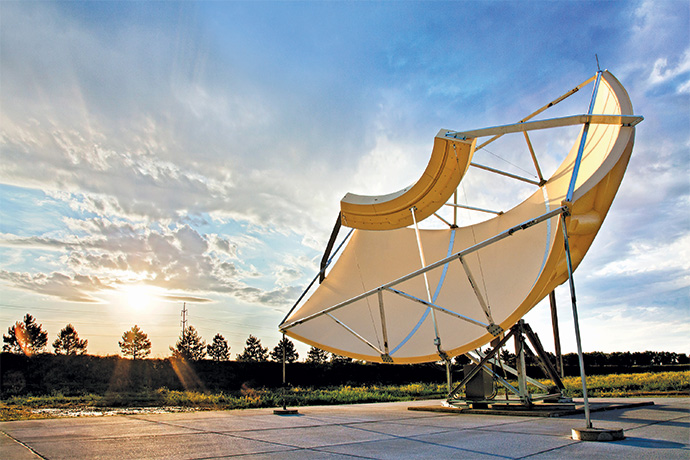 This massive antenna receives signals for Google’s Access Services unit, which brings fiber optics to residential homes all over the globe.
Photo courtesy of Google
by AMY STUMPFL

With more than a billion active users, Facebook has changed the way we interact socially. But when it came time for the social networking giant to build its new, state-of-the-art data center, the decision was all business.

"Iowa is a terrific location for a data center," says Brice Towns, data center manager for Facebook. "Our specific location in Altoona offered a shovel-ready site, excellent access to fiber and power, a strong pool of talent for construction and operations staff, access to wind-generated power, and a great set of community partners who can help us move forward quickly with our project."

Towns says that the Altoona facility is the company's fourth owned and operated data center, and the first to be powered 100 percent by renewable wind energy. Other facilities are located in Prineville, Ore.; Forest City, N.C.; and Lulea, Sweden.

Facebook first announced plans to build in Altoona in the first half of 2013, committing to an investment of nearly $3 million. The company expects construction on its 476,000-sq.-ft. facility to be completed later in 2014. But already Facebook is planning for future growth.

"The facility itself sits on approximately 200 acres, and Building One is about 1,200 feet long. Recently, Facebook announced the groundbreaking of the second building in Altoona, which will be similarly sized. We are extremely appreciative of the support we received from all of the local, regional and state partners that contributed to our decision to locate in Altoona."

Facebook's continued growth comes as no surprise to Dave Maahs, executive vice president of economic development at the Greater Des Moines Partnership. Maahs points to Iowa's business-friendly environment - including no property tax on equipment or computers.

This already-competitive atmosphere received a boost in 2009, when the state passed legislation to provide qualified data centers with full or partial exemptions from state sales and use taxes. Depending on the size of investment, data centers may be eligible for a 50- or 100-percent refund on sales and use tax for items such as electricity, equipment, computer and temperature control purchases.

"Iowa's business and regulatory climate is extremely competitive," Maahs says. "And we offer some of the nation's lowest energy costs. MidAmerican Energy has been a fantastic partner, not only in terms of rates, but also because of its commitment to green energy. By the end of 2015, MidAmerican expects that 40 percent of its power will be generated by renewable energy such as wind - an important factor for companies such as Facebook and Microsoft."

Microsoft cites Iowa's reasonable energy costs as a key factor in its continued growth in West Des Moines. The multinational corporation has maintained a presence in the area since 2010, and announced plans for its newest data center just this spring. The initial phase of "Project Alluvion" - which will bring the company's total investment in Iowa to nearly $2 billion - is targeted for completion in 2016.

Belady says that Microsoft considered a variety of issues before making its decision, including everything from the availability of skilled workers to the overall business climate.

"When choosing future data center sites, we take into account over 35 weighted criteria, including close proximity to customers, an ample and reliable power source and fiber optic networks, a large pool of skilled labor, and affordable energy rates to determine the long-term viability of each site," Belady explains. "The decision to expand in Iowa was predicated on several factors, not the least of which was a hospitable environment and low-cost energy. In addition, Microsoft's strong working relationship with state and local officials, as well as the city staff's knowledge of data center design, make for an environment that we believe will allow for easy deployment and management process at the new facility."

This responsive approach to business is nothing new for Iowa, according to officials at Google. Since opening its first data center in Council Bluffs in 2009, Google has continued to grow, announcing plans for a second facility in 2012.

"Over time, we've invested over $1.5 billion and have established a long-term commitment to the region and state," says company spokesman Eric Raymond, adding that Council Bluffs offers "the right combination of energy infrastructure, developable land, and available workforce" for data center operations.

"We were able to develop great partnerships with state and local policymakers and business/community leaders throughout the state, but particularly in Council Bluffs. We work closely with the mayor, city council and economic development arm of the state on a regular basis on a number of important topics regarding our current and continued operations in the area."

"This area has become something of a Midwest Silicon Valley, with major technology companies such as Google and Facebook opening data centers here," Rubins says. "I recognized some of the same benefits they did - including overall operating costs and utility costs. The price of electricity is substantially lower here."

"Local officials have been great," he says. "We had to rezone quickly, and they were very supportive of the project, expediting the process to meet our timetable. It's been a great partnership."

" This area has become something of a Midwest Silicon Valley, with ... companies such as Google and Facebook opening data centers here." 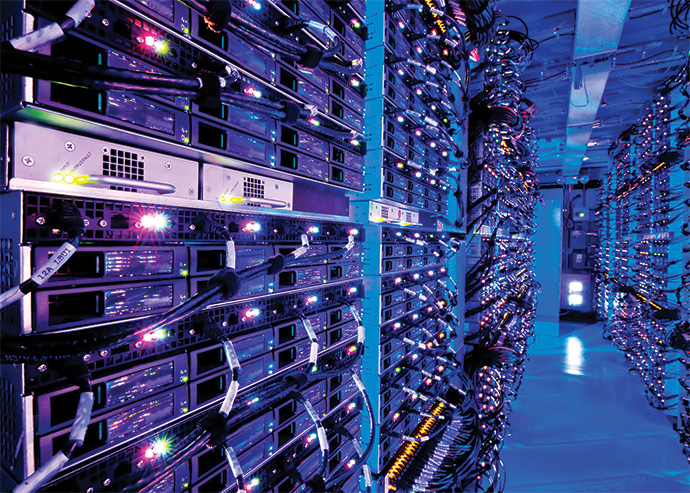 Microsoft has maintained a presence in West Des Moines since 2010, and announced plans for its newest data center in Spring 2014.
Photo courtesy of Microsoft