One Community at a Time

It started as a search to find the healthiest communities, but Blue Zones are becoming a movement. 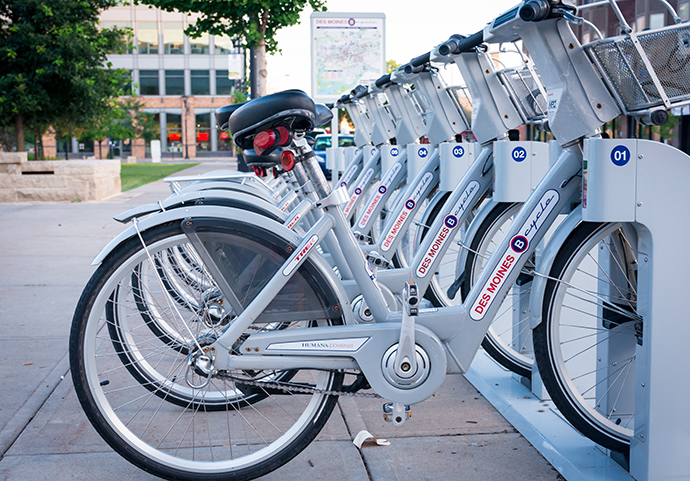 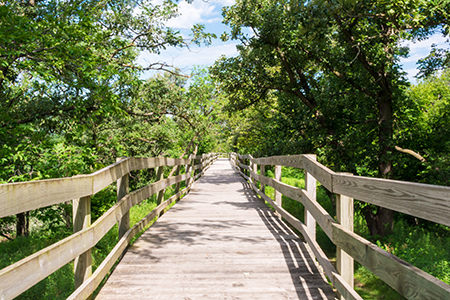 The state ranks eighth in the country for number of state parks and recreational areas. Shown here is the Hitchcock Nature Center at Honey Creek.
Photo by Heather Overman

When it comes to health, we could all use some improvements. Most of the time it’s our lifestyles that inhibit us from putting our health first, but wouldn’t it be nice if you could live somewhere and already have a higher life expectancy? Enter the Blue Zones Project.

In 2004, National Geographic identified the healthiest communities in the world and the contributing factors that lead to this distinction. There were several things that could easily be translated to any community, in any part of the world.

The Blue Zones Project in Iowa provides a system to help communities make changes to their environments that make healthy living a whole lot easier. In 2011, Governor Terry Branstad and Lt. Governor Kim Reynolds launched the Iowa’s Healthiest State initiative and began educating communities about the project. The first four Iowa communities, Cedar Falls, Mason City, Spencer and Waterloo, began their work in 2012. They were followed by Cedar Rapids, Muscatine and Sioux City in 2013, and Iowa City, Oskaloosa and Marion in 2014.

It takes a community to grow a Blue Zone. The citizens pledge to take action to improve their well-being and strengthen their chance at success by volunteering and working as a team. Schools, grocery stores, restaurants and churches also play a role by making changes to their policies to promote more movement and healthier eating. And finally, state policies are enacted to add more trails and easier access to walking and biking in communities.

A lot goes into becoming a Blue Zone. “In Iowa a community must have 25 percent of the public schools, grocery stores and restaurants achieve designation in the community,” says Mary Lawyer, vice president of operations and implementation for the Iowa Blue Zones Project. “Additionally, half of the 20 most influential employers must become Blue Zones Worksites, and 20 percent of the population must pledge and complete a healthy action toward enhanced well-being.”

On top of that, Lawyer says the community must also pass public policy that allows the community to be more pedestrian and biker friendly. The process might be a long walk, but Iowa’s communities are reaping the rewards. Lawyer cites transformations in schools, particularly through Walking School Buses. “We’ve seen an increase in many of our communities of children walking to school, including more than 640 students in Sioux City.” 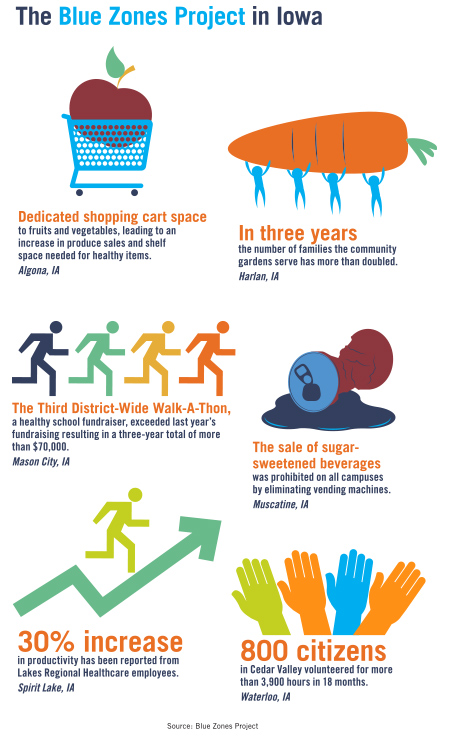 Wellmark, Iowa’s sponsor, says Blue Zones gives citizens the opportunity to envision the possibilities of how communities can impact well-being. “We chose to sponsor the Blue Zones Project in Iowa because we know that the cost of healthcare is quickly becoming unaffordable for many Iowans,” says Becky Wampler, director of Healthcare Sustainability for Wellmark Blue Cross and Blue Shield. “Research tells us that individuals are in control of 70 percent of the factors that influence their health — 50 percent is our behavior and 20 percent is the environment in which we live.”

Healthcare costs attributable to obesity were projected at $1.3 billion in 2013, growing to more than $3 billion for 2018. By implementing initiatives to positively impact health behaviors and achieve lifestyle changes, not only are Iowans improving their overall health, but they’re positively impacting the economy.

“We are seeing many benefits through individuals, organizations and the community,” says Lawyer. “It is always inspiring to hear stories of personal transformation, such as the one being shared by Lynn Stansbery.”

Lynn Stansbery joined the Blue Zones Project to get healthy and lose weight.

Since she joined, Stansbery has lost a total of 105 lbs. “I think telling my story has helped me recruit people into the Blue Zones Project,” says Stansbery. “I think our city is more conscious of moving. We have improved our sidewalks and traffic flow, and people are more aware of healthy foods. Grocery stores and restaurants are a big part of promoting healthier food choices and supporting the program.”

Stansbery is a member of the engagement community, and she shares her story to inspire others to get out and change their lifestyles and improve their environments.

“I want the Blue Zones Project to be recognized. When others see how we did what we did, and hear that it is a lifestyle change and not a diet plan, I want to be here and enjoy what we have done to improve ourselves.”