A Model of Modern Infrastructure

BNSF’S intermodal hub in Edgerton, Kansas, is speeding goods across the world 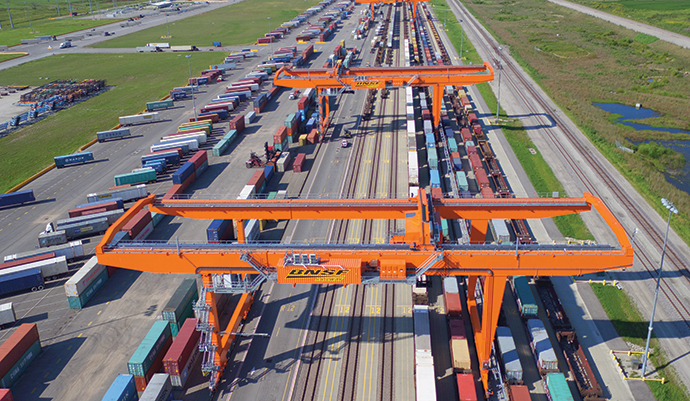 To make things simple we can start with dimensions. Logistics Park Kansas City in Edgerton, across the Kansas state line, covers 1,700 acres (688 hectares), about 10 Daytona infields. Somewhere in there is Amazon, which in 2016 took out a massive 822,104 sq.-ft. (76,376 sq.-m.) lease for a distribution center that packages and ships TV’s and kayaks. While prominent, Amazon is but one of many star clients at the growing logistics operation.

“It’s exceeded our expectations,” says Edgerton Mayor Donald Roberts, who says his town of 1,700 residents has added 3,300 jobs in the three-plus years LPKC has been up and running. “There’s about $150 million worth of public infrastructure in the park, coupled with about $1.1 billion worth of private investment,” says Roberts.

The Rise of a Giant

Railroad giant BNSF operates the guts of the operation, and was the impetus behind it. In 2005, BNSF bought 1000 acres (405 hectares) in Edgerton with plans for building an intermodal train and truck hub and coupling it with a logistics park. It laid 64,000 feet of track from one of its main lines to help make it happen. The state of Kansas would eventually chip in with an interchange off Interstate 35 that leads to the park.

“We had a need where we were driving a lot of traffic into the Kansas City market and our existing facility was getting a little taxed,” says Colby Tanner, Assistant Vice President for Economic Development at BNSF railway. “When we started looking around for a different location, this one kind of rose to the top.” Indianapolis, Columbus and Dallas also were considered, says an industry source.

“BNSF,” says Roberts, “had the vision of coupling their hub and the logistics park together.”

The other key corporate player in Logistics Park Kansas City is Missouri-based developer, NorthPoint, which constructed and leased the first warehousing space at the BNSF facility in 2013 and hasn’t stopped yet.

“We think that the total market demand approaches about 100 million square feet over about 20 years from when BNSF commenced operation,” Robinson. “As long as there’s a market for it we’ll continue to meet the demands of the market.” By some measures, LPKC already is the largest logistics park in the nation.

BNSF, having spent a reported $250 million on the project, operates the trains, tracks and cranes that deliver, lift and haul away goods to and from NorthPoint’s growing list warehousing tenants, which also includes DeLong Grain, DEMDACO, Excel Industries, Flexsteel, Jet.com, Kubuto, Triumph Group, Smart Warehousing and Spectrum Brands, whose Hardware and Home Improvement Division are moving into what is now the park’s single-biggest property, a 927,112 sq.-ft. (86,132-sq.-m.) distribution center. The company’s move was part of a plan to consolidate operations from two existing distribution facilities in Charlotte, North Carolina, and Mira Lom, California.

“AWESOME” and Speed is the Key

In addition to its proximity to major highways and Kansas City International Airport, a 40- mile drive, speed through the park is one of its big playing points.

“BNSF,” says NorthPoint’s Robinson, “aggregated over 20 years in the intermodal business, and this is their most state of the art facility.

“When a truck driver enters they get their thumb print scanned, everything’s optical recognition, so the inspection process only takes about two minutes. The total turn is about 26 to 28 minutes, and it used to be at least an hour. It’s about as efficient as it can be,” says Robinson.

“LPKC is really awesome,” says Jeff Metersky, Vice President of Solutions Strategy for Supply Chain Management Firm Llamasoft in Ann Arbor, Michigan, “because it’s kind of sitting in the center of the country. There’s at least four of five highways that connect with the middle of the country. Their mission in life is to allow access to almost every mode of transportation that you can have at one central location, and the parks that pop up around them are the distribution and warehousing types of operations. You can have everything in one place.

“They set it up as an international intermodal,” says Metersky, “which means that you can load at that location and go directly to a port for export. You don’t have to process anywhere else. You don’t have to de-containerize. You can skip multiple steps on the export side.”

“The demand for facilities like this is increasing. It’s a phenomenon we’re really seeing over the last 18 months,” says BNSF’s Tanner. “Amazon has changed the whole retail dynamic in a lot of things that are moving online. ‘How fast can I get more product ordering it through e-commerce versus actually making a trip to the store?’ As Amazon has continued to expand their prime offering and two-day and one-day shipping, it starts to put pressure on the logistics chain.

“Other retailers,” says Tanner, “seem to be following Amazon’s lead, so if Amazon has set the standard for delivery and speed, other retailers are now having to do the same thing to keep up. So, you’re seeing industrial warehousing taking off over just the last 18 months.”

How to Seize an Opportunity

Beyond providing jobs to Edgerton and surrounding Johnson Country, Logistics Park Kansas City has been a huge boon to local economies.

“Our tax base is shifting dramatically from residential to industrial. It’s allowed our city to provide more services. Our school has 50 percent free and reduced lunches today,” says Edgerton Mayor Roberts.

“They didn’t like the project, so they passed. In June 2009, it was looking like it didn’t have a home, so we began negotiating with BNSF. We negotiated pretty quickly. In September 2009 we had an agreement.” 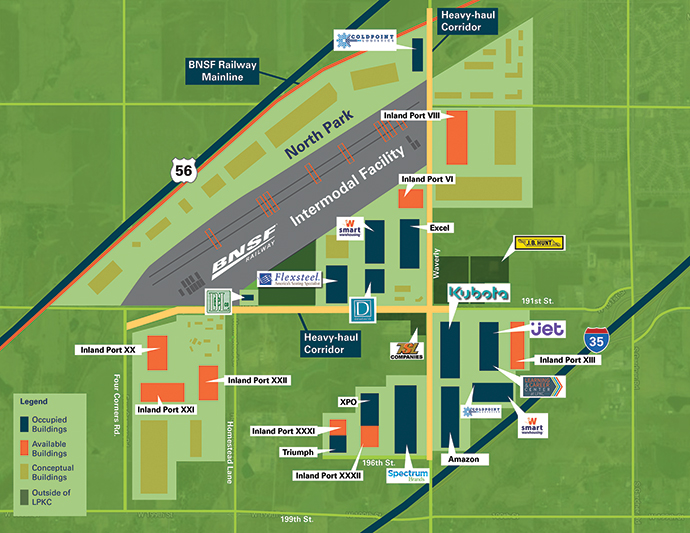