Where Flyovers Are a Good Thing 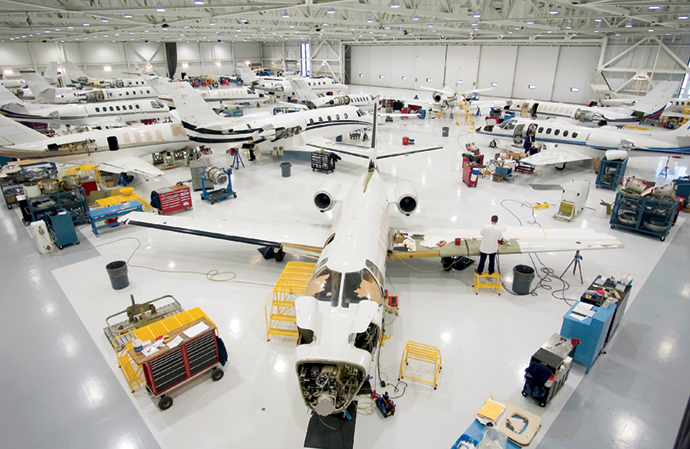 Aerospace and defense contribute $7 billion to Kansas GDP and $2.25 billion in annual aerospace exports. The state also boasts the No. 3 highest concentration of aviation workers in the nation.

PwC’s 2020 Aerospace Manufacturing Attractiveness report ranks Kansas No. 19 overall, No. 17 in industry presence, No. 13 in labor skills and proficiency and No. 11 in infrastructure.

The state owes those notable numbers to one primary location: Wichita, where Clyde Cessna moved his factory from a farm in 1916. The Wichita area, home today to the headquarters of Textron Aviation’s Cessna and Beechcraft brands, is why Kansas produces one-third of all general aviation aircraft built in the United States. Bombardier Learjet, Dassault Systemes, Spirit AeroSystems and Airbus are there too, and all are supported by a supplier network consisting of more than 450 aerospace companies.

According to the U.S. Bureau of Labor Statistics, Wichita has the highest concentration of aerospace manufacturing employment in the nation. Open it up larger to aerospace and defense, and the U.S. Cluster Mapping Project led by the Institute for Strategy and Competitiveness at Harvard Business School finds the Wichita region No. 4 in the nation behind giants Seattle, Los Angeles and Dallas, leading Kansas to No. 5 in the nation at the state level.

Airbus Americas Engineering Center in Wichita is the company’s largest North American engineering facility. Wichita State University’s Innovation Campus, started in 2015, has seen over $250 million in development from most of the sector’s big names.

It’s not just those big names, but an entire ecosystem in Wichita, including maintenance, repair and overhaul (MRO). And they sometimes invest again before the first project is even finished.

Such is the case with Clemens Aviation, which has invested $4 million in two aircraft hangars on leased land at Colonel James Jabara Airport in Wichita in order to offer its range of charter, maintenance and other aviation services. Even as the hangars were nearing completion, the company proposed to build two more on adjacent land that the Wichita Airport Authority has been promoting for development for years. Not only will the company fund its own construction costs, it also plans to pay for a taxiway connector and aircraft ramp between hangars, with the taxiway available to serve future aeronautical development.

Jabara is a general aviation reliever airport that features the Embraer Business Jet Service Center and Midwest Corporate Aviation, a full-service fixed-base operator with a Cessna Service Center. The airport is adjacent to the National Center for Aviation Training (NCAT) at WSU Tech, and offers 365 acres of available development space.

“This amazing development is still more proof of the enormous potential and excellence of the aerospace industry in Wichita,” said David Toland, Lieutenant Governor and Secretary of Commerce, Kansas Department of Commerce.

Earlier in 2020, Bell was selected as a finalist to pursue two critical U.S. Army modernization programs. As a result, the company invested in the new office to support Bell’s future growth plans.

“Bell is well known for its innovation, which makes it a perfect fit for Wichita,” said Andrew Nave, executive vice president of economic development for the Greater Wichita Partnership. “Wichita is the Air Capital of the World, and with resources like WSU’s National Institute for Aviation Research and our extensive supply chain, our region is leading innovation in design, engineering, testing and manufacturing in aerospace and beyond.”

Earlier in the year, Textron Aviation Inc. (whose global HQ is in Wichita), WSU Tech and the International Association of Machinists and Aerospace Workers (IAMAW) announced a new collaborative apprenticeship program to address long-term production and tooling requirements for the company’s aircraft programs. The two-year program will provide students both factory and classroom training in a wide range of skills needed to help design, build and maintain production tooling, which covers everything from specialized hand-held tools to large jig assemblies supporting aircraft parts and assemblies.

“Textron Aviation has long been committed to building educational and community partnerships that benefit both the company and the region, particularly in developing a well-paid, skilled workforce that maintains our advantage in a very competitive, global market,” said Maggie Topping, senior vice president of HR and Communications at Textron Aviation. “Through the new apprenticeship program with WSU Tech, our students will get the benefit of an advanced curriculum designed specifically for this program, as well as learn on the job from our highly skilled tradespeople.”