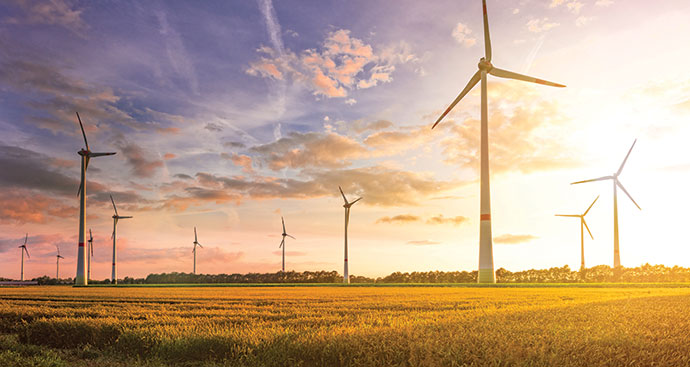 According to the AWEA, wind farms in Kansas have brought more than $11 billion in capital investment and created more than 5,000 jobs. Each year, project-related payments exceeding $60 million are paid to state and local governments and in lease payments.

A significant economic driver for the state — from energy production to manufacturing components — Kansas is home to five manufacturing facilities for the wind industry, including wind turbine manufacturer Siemens Gamesa in Hutchinson.

In June, Enel Green Power began construction on a new 199 MW addition to the Cimarron Bend wind farm in Clark County. The 200 MW expansion alone is estimated to generate an additional $49 million in lease payments to local landowners and over $18 million in new revenue to fund schools and public services over its lifetime. When the addition is complete, Cimarron Bend will generate over 2.7 TWh total per year, equivalent to avoiding 1.5 million tons of CO2 emissions.

The $281.4 million expansion will consist of 74 wind turbines, will be responsible for over 250 temporary jobs and add 5-10 permanent operations and maintenance positions.

“As Kansas’ wind leader, Enel Green Power is proud to step forward to generate new jobs and economic growth for Kansas during this challenging time,” said Georgios Papadimitriou, Head of Enel Green Power in the U.S. and Canada. “Most importantly, we remain firm in our commitment to protect the health and safety of our workers and host communities as we execute this expansion safely and sustainably.”

The Cimarron Bend expansion will include support for Evergy’s Renewables Direct program and help fuel new wind energy investment in Kansas. The program features a “green” tariff approved by the Kansas Corporation Commission in 2018 that allows companies, cities, universities and other commercial and industrial customers to offset some or all of their energy usage through a renewable source.

In November, Evergy announced the launch of its Renewables Direct initiative that will provide long-term price stability and competitive pricing for local renewable energy to qualifying businesses, agencies and commercial customers. As new customers enroll in the program, Evergy will expand its renewable energy sources to continue to meet sustainability goals. The company has announced that more than 50 organizations have started receiving energy from two area wind farms this month.

Commercial and industrial customers who use at least 200 kilowatts (kW) a month and are interested in the program can sign up for offsets in 200 kW increments up to 1 MW. Offsets are purchased in 500 kW increments after that. Participants sign an agreement lasting five, 10, 15 or 20 years, and the cost of the energy produced through the program is expected to be cheaper than power produced by burning fossil fuels.

One of the initiative’s supports is the University of Kansas (KU). In 2019, KU signed a 20-year commitment with Evergy to provide the university with a stable, affordable electricity rate for the Lawrence campus, with expected cost savings of $250,000 to $350,000 annually.

“Renewables Direct furthers the university’s commitment to sustainability by supporting Kansas wind energy,” said KU Center for Sustainability Director Jeff Severin. “Our participation in the program encourages growth of clean energy and shows our support for modernizing how electricity is produced.”

Wind-swept prairies aren’t the state’s only asset when it comes to renewable energy. With an average of 225 sunny days per year, there’s a lot of solar energy available.

Sunflower Electric Power Corporation is constructing the $37-million Johnson Corner Solar Project in southwest Kansas to bridge its renewable energy power needs by providing an optimal energy source when winds are not blowing. The Johnson Corner Solar Project, the largest commercial solar project in the state, will help Sunflower meet electricity demand during peak times like the summer.

“Sunflower is proud to have worked with Lightsource BP and NRCO to bring online the state’s largest solar project to date,” said Stuart Lowry, president and CEO of Sunflower. “The Johnson Corner Solar Project adds yet another renewable fuel source to our diversified generation portfolio, which is designed to protect both the affordability and reliability of the energy we provide to our members.”