Squarely In the Middle

The community of Russell offers the perfect blend of industrial opportunity with a high quality of life.

Companies looking for a new location in the middle of everything should look no further than Russell, Kansas. Technically speaking, the United States’ geographic center is 80 miles north of Russell in Lebanon, Kansas, but you get the point. Russell is as centrally positioned as cities come.

Located at the junction of Interstate 70 and Highway 281 — approximately 240 miles west of Kansas City and 360 miles east of Denver — Russell’s strategic position in West Kansas offers easy access to markets across North America. 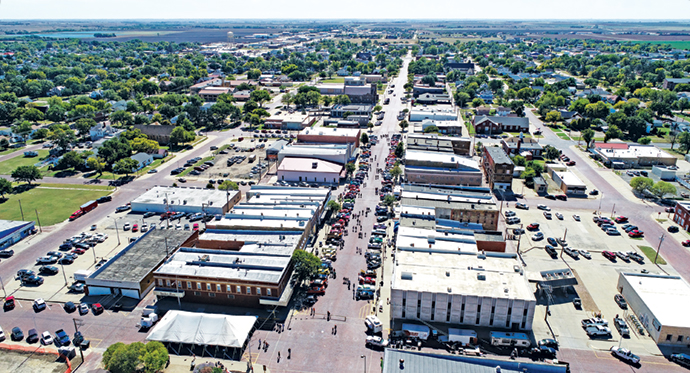 Downtown Russell
Photo courtesy of the City of Russell

Russell offers a variety of benefits for businesses. With excellent multimodal transport options, including Union Pacific Railroads rail service and a thriving modern, municipal airport. Additionally, the city owns both the electric and water utilities and offers various economic development incentives to encourage new businesses to locate in the region.

“Russell’s geographic location is a huge advantage for companies doing an interstate business,” said Jon Quinday, City Manager of Russell. “Russell is the center of everywhere at Interstate 70 and US Highway 281, two major highways that run to and from every coast and the Canadian border. Russell has better technology resources than many metropolitan centers in the state, creating an abundance of opportunities for businesses who choose to locate in Russell. Russell provides a very positive environment for companies with diverse financial support and incentives, many that can be layered to create critical gap financing and tax saving options.”

Nearly a century ago, an oil boom paved the way for economic growth at a critical junction in the state. Today, the county is one of the state’s top 5 oil producers. The city is home to a wheat gluten and ethanol manufacturing facility, a feed manufacturing facility and more at its industrial park. The region’s natural resources, logistics infrastructure and stable workforce have created a dynamic cluster of industries to grow and flourish, with plenty of room to expand.

One such company, PureField Ingredients, operates two state-of-the-art manufacturing facilities in Russell, where it produces food ingredients and co-products. Already the nation’s largest domestic supplier of wheat gluten, the company announced it would expand its production capabilities by 50% in December. The more than $30 million facility expansion is expected to be completed in early 2022.

PureField Ingredients provides a dependable distribution channel that is not subject to international supply chain disruptions. The company sources locally grown grains that can be traced directly back to individual Kansas farms.

Longtime major employer, John O. Farmer, Inc. first opened its oil and gas production company in Russell in 1946. Today, it is one of the state’s top producers, generating approximately 30,000 barrels of oil each month with over 200 leases and 350 wells. Still family-owned and operated, the company’s president, John O. Farmer, IV, noted several benefits related to its location — outside of its plentiful oil reserves.

“The cost of living in Russell is below the state and national averages, so the local dollars will go farther,” Farmer explained. “This translates in that the costs for John O. Farmer, Inc. to operate the leases we own are lower in comparison to other regions of the United States, which keeps us competitive in a low-cost producer market. I believe there is also an advantage in living in rural America, in that we can ‘tune out’ all the noise seen in the big cities. Russell seems to have an advantage in that there are not constant distractions, and we can become better focused as a company without these distractions.”

Additionally, the region’s skilled and dependable workforce has allowed the company to grow over the years. Farmer says several families have worked at the company for generations — three of which have between 150 and 300 net years of combined service between family members.

“People from this area have a great work ethic and believe in a good honest day of work,” Farmer said. “I feel our employees go to work to ‘complete the job for the day,’ regardless of how many hours it may take, instead of ‘getting your eight hours in.’ There seems to be a lot of loyalty and pride in being from Western Kansas.”

Though the city itself is only home to 4,463 (with approximately 6,933 in Russell County), many people who call it home would not want to live anywhere else. The small-town environment offers its unique lifestyle — with high-quality education, health care and plenty of outdoor recreational attractions to explore. 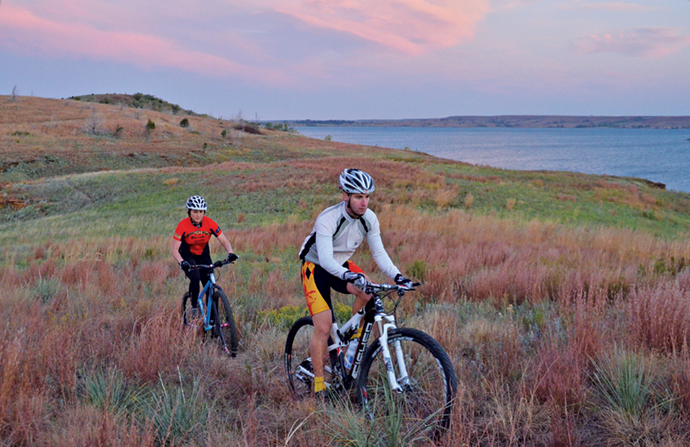 One of the state’s most beautiful attractions can be found at Wilson State Park. Wilson Lake’s rugged shoreline with scenic cliffs provides a stunning backdrop for watersports like boating, jet skiing and fishing. The surrounding Wilson Wildlife Area is a prime location to find deer, pheasant, waterfowl, songbirds and many other wild animals. The popular Switchgrass Bike Trail takes mountain bikers through 25.5 miles of some of nature’s finest views, while hiking trails can be found throughout the area.

The city is also home to several unique landmarks, including the boyhood home of Senator Bob Dole, the Fossil Station Museum, the Garden of Eden, the Log House and the Bowl Plaza.

For Kayla Schneider, Assistant City Manager, the decision to move back to her hometown coincided with her decision to start a family. After her husband’s military career, the couple wanted to provide their children with a safe place to plant their roots.

“We are a community that cares for each other,” Schneider said. “This is a specific advantage for raising a family. Parents look out for each others’ children, and we have the opportunity to watch the same small group of children grow up together. Small class sizes make this possible. Graduating classes are in the 60-80 range, depending on the year. There is the adage that ‘it takes a village,’ Russell provides that village. I couldn’t imagine raising my family anywhere else.”

This investment profile was created under the auspices of the City of Russell. For more information, please contact Jon Quinday at 785-483-6311 or quinday@russellcity.org.