A galaxy of discovery awaits those who visit Kansas. 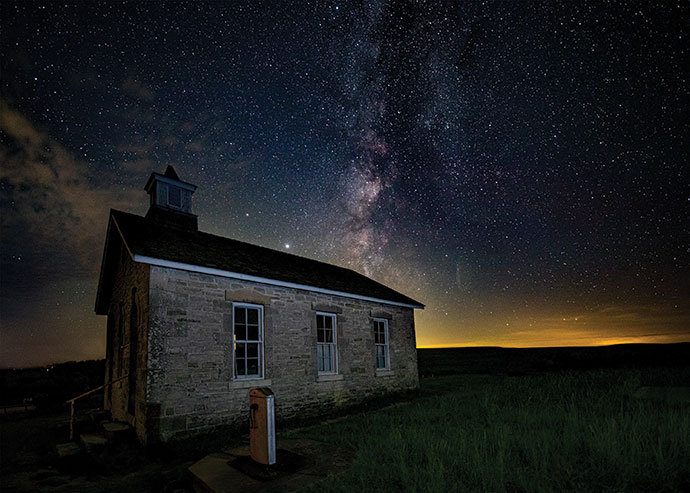 Kansas enjoys a unique state motto. “Ad Astra per Aspera” is Latin for “to the stars through difficulties.” Coined in 1861, it refers to the many hardships Kansans endured before statehood, including bloody wars between pro-slavery and anti-slavery partisans.

So, there’s more than a hint of irony in the fact that Kansas rolled out its new tourism tagline, “To the Stars,” in the midst of a painful pandemic. Meant to honor and build upon “Ad Astra per Aspera,” the marketing theme “happens to be exactly what we need — a celebration of in the face of adversity,” says Bridgette Jobe, director of Tourism with the Kansas Department of Wildlife Parks and Tourism (KDWPT).

Taken collectively, some of the most compelling destinations in Kansas represent a rousing journey through heroic acts of fortitude and hard-earned triumph, including the epic struggle for civil rights. Inaugurated in 2004 as the Brown v. Board of Education National Historic Site, Monroe Elementary School in Topeka was one of four schools for Black children covered under the 1954 Supreme Court case that outlawed segregation in American public schools. Today, the two-story schoolhouse maintains an auditorium with educational film screenings, photo galleries, information and music kiosks and rotating special exhibits.

The Nicodemus National Historic Site, located in Nicodemus, preserves and protects the only remaining western town established by Black Americans during Reconstruction. It features a restored Township Hall, two churches, a schoolhouse and the former St. Francis Hotel. The Gordon Parks Museum in Fort Scott features works of the iconic Black photographer and filmmaker born in the town in 1912, and best known for chronicling the Black experience for Life Magazine and in the seminal movie Shaft, which he directed, in 1971.

The National Depression Glass Museum in Wellington is its own study in endurance. Featuring more than 18,000 pieces of glassware not only from the Depression but from the late 1800’s all the way to mid-20th century modern, the museum survived the partial collapse of its building in 2019 and re-opened in larger accommodations four months later. Extensive renovations to the Eisenhower Presidential Library, Museum & Boyhood Home in Abilene, completed in the summer of 2019, yielded new display cases, videos and digital interactive stations pertaining to the Eisenhower presidency and command of Allied forces in World War II.

Nearly leveled in 2007 by an EF5 tornado, the city of Greensburg is a story of survival and renewal. Six years after the twister that destroyed 95% of Greensburg’s buildings, the town had rebuilt itself as one of the world’s greenest communities. Today, Greensburg is entirely powered by renewable energy and boasts more than a half-dozen LEED-platinum certified buildings, the highest designation offered by Leadership in Energy and Environmental Design.

To the Great Outdoors

To those who have the impression that Kansas is flat, it is not. Just ask any bicyclist who has endured the Dirty Kanza, an annual race through the rolling Flint Hills southeast of Wichita. The 2019 running covered 9,600 feet of elevation changes over 200 miles.

Yes, Kansas has plains and prairies. But to venture off the beaten path is to discover a state of enchantingly varied elevations, textures and colors. No greater example exists than Little Jerusalem Badlands State Park, home to spectacular Niobrara Chalk formations that date back some 85 million years. Established only in 2018, the shrine to nature’s tumult, which includes a mile-long stretch of 100-foot-tall spires and cliffs, is named for its resemblance to the walled city of Jerusalem.

Not far from Little Jerusalem, the jagged Monument Rocks jut skyward in other-worldly permutations. Monument Rocks was the first site chosen by the U.S. Department of the Interior as a National Natural Landmark.

More subtle, but stunning in its own right, Tallgrass Prairie National Preserve in the Flint Hills is the largest expanse of tallgrass prairie left in the world. The preserve is home to over 500 species of plants, tallgrasses such as big bluestem, Indian grass and switchgrass, and wildlife that includes deer, bison, amphibians and reptiles.

One of 26 state parks in Kansas, Kanoplis State Park in the rolling bluffs and woods of the Smoky Hills region of central Kansas features towering Dakota sandstone bluffs of rugged beauty, offering stunning vistas. Nestled near the Smoky Hill River toward the northwest portion of the wildlife area is Faris Caves, which were carved by early pioneers and served as milk house, schoolhouse and living quarters.

All but two of the Kansas state parks offer easy access to lakes or the Kansas River, which highlights the proposition that Kansas, while far from the coasts, offers some of the finest water recreation in the country. The Kansas River has been named a National Water Trail, a title reserved for America’s finest floats. Tuttle Creek State Park, Cross Timbers State Park and Eisenhower State Park all offer canoe and kayak rentals, while KDWPT owns and operates 43 fishing lakes of up to 300 acres.

The vibrant towns and cities that stretch the length and breadth of Kansas offer their own unique attractions, from the classic to the quirky and all points in between.

The Basilica of Saint Fidelis in Victoria, also known as The Cathedral of the Plains, is one of fewer than 100 basilicas in the U.S. At the time of its dedication in 1911, it was the largest church west of the Mississippi River.

One of the 8 Wonders of Kansas, The Kansas Underground Salt Museum in Hutchinson rests 650 feet beneath the earth’s surface in a salt bed formed during the Permian Period, 275 million years ago. Some 300,000 square feet of caverns contain attractions including the Salt Mine Express Train and the new Salt Safari Mine Adventure Hike.

Topeka’s Kansas Museum of History depicts the Kansas story from the earliest civilizations to the recent past, including early settlement, the Civil War and the development of agriculture. Displays include an 1880 steam locomotive and an airplane built in the early 1900’s.

Craft beer enthusiasts have their choice of more than 60 craft breweries across the state of Kansas, including Tall Grass Tap House in Manhattan, Barrister’s Brewing in Topeka, Hopping Gnome Brewing Company in Wichita and Radius Brewing Company in Emporia.