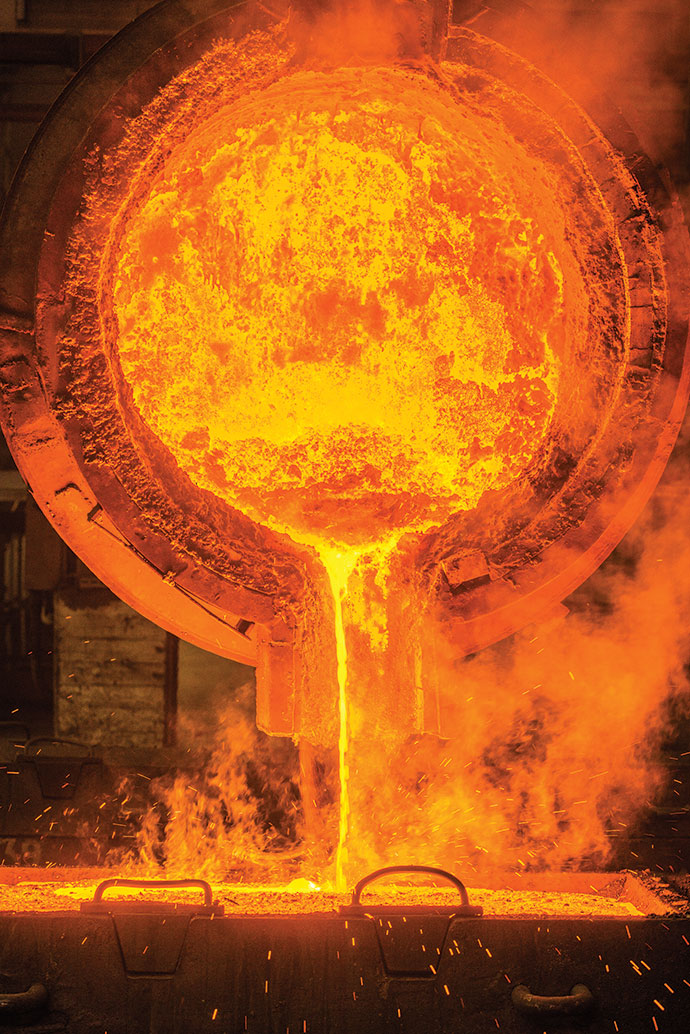 Whether you’re building a new soccer stadium or producing thousands of automobiles, the one component you absolutely must have is metal.

Primary metals, from steel and aluminum to all kinds of specialty alloys, are basic building blocks of America, and one of the most important producers and downstream processors of these metals is Kentucky.

Of the industry sectors showing signs of growth during an otherwise rocky economic time, Kentucky’s metals sector stands out as robust and resilient. Since the start of 2014, the Bluegrass State has landed 105 primary metals expansion projects that have accounted for over $6 billion in cumulative capital investment and created 5,156 jobs.

Since the beginning of 2014, Kentucky has secured 44 projects in the steel and iron ore production sector, accounting for over $3 billion in capital investment and 1,824 new jobs.

David Hamilton of the Kentucky Cabinet for Economic Development says it’s easy to see why so many metals companies continue to place their faith in Kentucky as a base for production. “Our nationally low industrial electric rates make us a preferred destination for metals investments,” said Hamilton. “For a long time, we have had the lowest rates east of the Mississippi and among the lowest in the nation.”

But it takes more than power to deliver primary metals. “In addition to low power rates, we have an established network that is very beneficial to metals producers,” Hamilton said. “The automotive industry is here — Kentucky is first in the nation in vehicle production per capita — and that creates huge demand for these metal products.”

Access to markets is a differentiator as well. “Kentucky’s location is top-notch,” said Hamilton. “Our central location gives manufacturers access to well over half the country’s population in a day’s truck drive or less. Products here move by rail and water too. Our production plants are located on major rail lines and commercially navigable rivers.”

“We have been doing business in the state for more than a decade and have found that the people of Kentucky share our company’s values of hard work, determination and teamwork.”
— Leon Topalian, President & CEO, Nucor Corp.

Combine that with a competitive business climate, and the location decision becomes easy, said Hamilton. “We offer a low cost of doing business, and we put an emphasis on business-friendliness. Our corporate tax structure is favorable to companies in these industries.”

Employers are responding in kind. Danieli Corp. announced last September that it would grow its Ashland operations to 61 employees at the company’s site alongside the former AK Steel property. Danieli is an Italian-owned metals industry supplier that employs more than 10,000 workers globally.

Feralloy Corp., a Chicago-based steel processing firm, announced last July that it would invest $17.5 million to create a facility on Nucor Steel Gallatin’s campus near Ghent to level and cut steel for customers throughout the Ohio Valley region. The project creates 30 jobs.

Steeled for the Long Haul

Nova Steel USA unveiled plans last October to invest $70 million and create 110 full-time jobs at a steel tube manufacturing facility in Bowling Green; and Nucor Corp. broke ground on Oct. 23 on the company’s 400-job, $1.7-billion steel plate manufacturing mill in Meade County, a project that is expected to employ up to 1,500 contractors during construction.

Located in the Buttermilk Falls Industrial Park along the Ohio River in Brandenburg, the 1.5 million-square-foot complex will provide Nucor with 1.2 million tons of annual capacity for steel plate production. The average annual wage for the 400 positions will be $72,000. The mill is expected to open in 2022.

“A core part of our company mission is to support the communities where we live and work,” said Leon Topalian, president and CEO of Nucor Corp. “We have been doing business in the state for more than a decade and have found that the people of Kentucky share our company’s values of hard work, determination and teamwork.”

Headquartered in Charlotte, Nucor is North America’s largest recycler and the nation’s largest steel and steel products producer. The company employs more than 26,000 workers at its 300-plus plants, which are located mostly in North America.