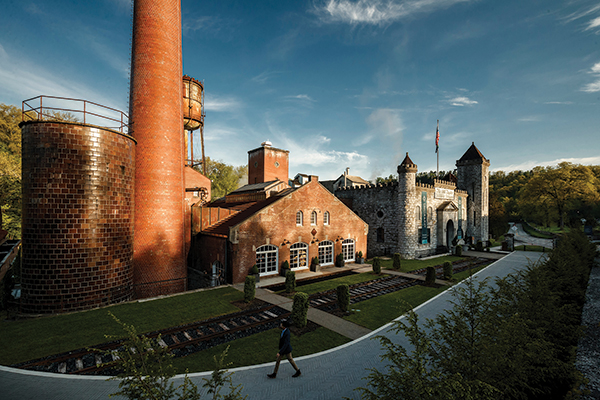 pirits are running high, and the juice is flowing again along the Bourbon Trail. After a COVID-related downturn in 2020, bourbon enthusiasts are back, and in numbers suggesting that 2022 will be a record year.

Visits to the Kentucky Bourbon Trail and Kentucky Bourbon Trail Craft Tour were up 160% in 2021 — just below the pre-pandemic high set in 2019 — according to the Kentucky Distillers’ Association (KDA). Reduced visiting hours and limits imposed on tour sizes, says KDA president Eric Gregory, are all that prevented 2021 from setting records of its own. In all, 1.5 million tours took place, up from 587,000 in 2020.

“Our distilleries,” said Gregory in conjunction with the report, “moved mountains to provide safe, engaging tourism experiences during a pandemic for guests from all over the world.”

In addition to generating joy along the Trail, Kentucky bourbon is serious business. As one of the state’s signature industries, it is a $9 billion economic and tourism machine. KDA reports bourbon generates more than 22,500 jobs each year, over $285 million in local and state taxes and $1.8 billion in federal alcohol taxes. On average, bourbon tourists spend between $400 and $1,200 during their visits, travel in large groups and stay longer than other tourists.

Established in 1999, the Kentucky Bourbon Trail (KBT) has helped to propel the ongoing boom of an industry rooted in the 1700s, when settlers discovered that the territory’s fertile soil was perfect for growing corn, the elixir’s base ingredient. In 2012, the Kentucky Bourbon Craft Tour (KBT Craft Tour) was born to highlight the burgeoning micro distilling movement. Meandering as they do through gentle hills and lush pastures, the trails showcase some of the Bluegrass State’s most inviting landscapes, tracing a triangle with points in Louisville, Lexington and Bardstown.

The iconic James B. Beam Distilling Co. in Clermont, one of 18 stops on the Kentucky Bourbon Trail, is among the Kentucky distilleries for which the pandemic years have been a time of re-tooling and rejuvenation. After a closure that lasted 10 months, the facility re-opened in the fall of 2021 with a brand new $60 million tourism experience. The main feature is the Fred B. Noe Distillery, named in honor of the late, seventh-generation master distiller and run by his son. Powered by renewable energy, the new distillery hosts sessions and seminars and has entered into a partnership with the University of Kentucky’s James B. Beam Institute for Kentucky Spirits to train aspiring distillers.

Also in 2021, four new distilleries were added to the KBT Craft Tour, for a total of 23. The additions are scattered across Muhlenberg, Woodford and Nelson counties.

The newly-opened Log Still Distillery, near Bardstown, continues the family tradition of John Washington Dant, who began producing whiskey in the early 1800s from a still fashioned from a hollowed poplar log. J.W. “Wally” Dant and other family members invested more than $20 million in the restoration of a Nelson County distillery once run by his great-grandfather, William Washington Dant.

Open since the spring of 2021, the 220-acre facility includes a bed and breakfast, walking trails and fishing lake, as well as a tasting room crafted from an old barreling house. The entire operation is a nod to tradition, “using processes similar to those that were used from the early 1900s and limestone water from the same creeks and streams,” Wally Dant said. “We’re doing as much as we possibly can to authenticate what my family has been doing for generations.”

Castle & Key, opened in 2018 and recently added to the KBT Craft Tour, is the labor of love of Will Arvin and Wes Murry, who took four-and-a-half years to restore the picturesque Old Taylor Distillery in Millville. It truly is a castle, complete with towers, turrets, spring house and a sunken garden. The renovation was featured in Architectural Digest, which described it as having “a look and feel that is modern yet with Victorian and Neoclassical touches.”

Arvin and Murry proclaim the ornate facility south of Frankfort, dating to 1887, as “the birthplace of bourbon tourism.” In addition to bourbon and rye, Castle & Key distills an array of adventurous gins and vodkas concocted by Marianne Eaves, Kentucky’s first female Master Distiller since Prohibition. The Castle & Key experience includes tours of the 113-acre grounds and the breathtaking sunken gardens, restored by landscape designer Jon Carloftis. An evening music series launching in 2022 is to feature local musicians, food trucks and drinks on the spring house lawn the first Wednesday of each month.

The Bard Distillery, which opened its doors in Muhlenberg county in 2019, briefly halted production to produce hand sanitizer to combat the pandemic. Again churning out its signature Silver Muhl White Whiskey and Cinder & Smoke — a 13-year old straight bourbon — the Bard campus also features a visitor center and gift shop with plans for expansion.

Operated by Tom and Kim Bard, a former professional racer in NASCAR’S Xfinity Series, The Bard joins a list of distilleries in the Western Kentucky region that include MB Roland and Casey Jones in Christian County and Dueling Grounds in Simpson County.

Copper & Kings American Brandy Distillery, billed as a brandy maker for bourbon lovers, is the newest addition to the Louisville leg of the KBT Craft Tour, which also includes Kentucky Peerless Distilling Co. and Jeptha Creed Distillery. Located in historic Butchertown, Copper & Kings distills its brandies, gins and liqueurs in copper pot stills then matures them in used bourbon barrels. Its products are enhanced, the distillery says, by the pulsating beat of rock ‘n roll music that creates a “distillate wave” inside the barrel. A rotating song list is posted daily.

“Our signature house style,” said owners Joe and Lesley Herron, “is a little feisty and rambunctious with a long smooth finish — just like America.” Copper & Kings features a Rooftop Bar & Restaurant with a menu driven by seasonally available local fare, prepared with brandy pairings in mind. 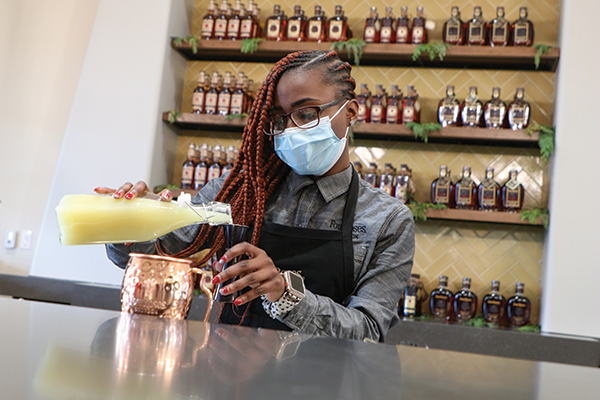