The Center of Success 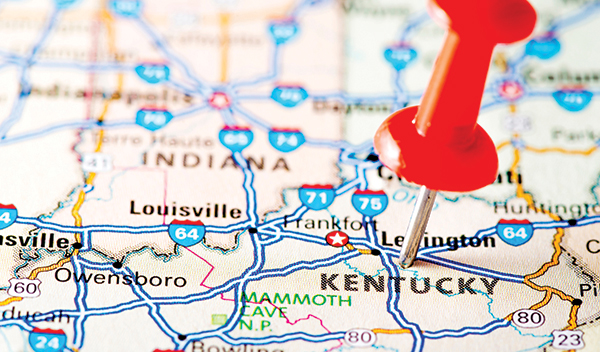 hile the COVID-19 pandemic undeniably caused massive supply chain disruptions that hindered the global distribution and logistics landscape, it also shined a spotlight on the industry’s massive importance, which only stands to grow in the coming years.

Consider its impact on Cincinnati/Northern Kentucky International Airport (CVG), located on the Kentucky side of the Ohio River in the community of Hebron. As airports across the nation grappled with plummeting passenger traffic, a boom in air cargo provided a welcomed silver lining for CVG. Cargo volume skyrocketed following the pandemic’s onset, and throughout the months that followed, shipments reached levels typically seen only during the holiday season.

This cargo boom stems from significantly accelerated growth in e-commerce, as consumers’ reliance on online ordering and home delivery reached an all-time high. E-commerce played a major role in the distribution and logistics industry’s growth across the past two decades, during which online shopping grew from less than 1% of all retail sales in 2000 to more than 11% in 2019.

That steady climb took a sharp upturn as more consumers relied on online ordering out of necessity. E-commerce peaked at approximately 16% of all retail sales in 2020 and remained at 13% in 2021.

With e-commerce showing little sign of slowing, states like Kentucky — with its ideal geographic location and formidable logistics landscape — are poised to leap ahead. In the meantime, the distribution and logistics sector continues to play a pivotal role in efforts to bring the pandemic to an end.

“Kentucky’s distribution and logistics industry, along with the sectors that help keep it moving, have been instrumental in our state’s ability to battle the pandemic and set the stage for future success,” Kentucky Gov. Andy Beshear said. “Our logistics leadership in Kentucky has been at the forefront of the effort to distribute safe, effective COVID-19 vaccines to Americans, and it will certainly prove key in building a better, economically stronger Kentucky. As the industry grows, we will continue taking steps to ensure its future success here in the Bluegrass State.”

Kentucky’s longstanding logistics prowess has been front and center over the past two years, as the state powered the distribution of the first vaccines to arrive in the U.S. in late 2020. Distributing these vaccines proved no easy task, particularly given the initiative’s massive scale and the challenges posed by the need to store vials at frozen temperatures.

Even so, companies like UPS and FedEx, each with significant presences in Kentucky, made and continue to make tremendous contributions toward ending the pandemic. UPS houses both the planet’s largest automated package-handling facility, UPS Worldport, as well as its Centennial ground hub in Louisville, and FedEx operates several large ground hubs throughout the commonwealth. These operations, and the industry as a whole, will remain key to setting the foundation for continued recovery and economic growth in Kentucky.

Looking to a post-COVID future, the already prominent sector stands to play an even larger role in rebuilding the economy.

Distribution and logistics companies benefit from the state’s second-to-none geographic location. Kentucky sits at the center of a 34-state distribution area, and its borders lie within a day’s drive of more than two-thirds of the nation’s population, personal income and manufacturing operations.

When it comes to shipping products around the globe, Kentucky stands out as the country’s only state with three air cargo hubs: the aforementioned UPS Worldport, housed in the Louisville Muhammad Ali International Airport; DHL’s Americas hub, located at CVG; and the Amazon Air hub, a $1.5 billion development that launched in August 2021 and serves as the center of the retail giant’s air transportation network in Northern Kentucky.

This strong presence by the most prestigious names in logistics means products manufactured in Kentucky can virtually get anywhere in the world overnight.

These benefits have been critical during the pandemic, particularly for companies whose products and services were needed to protect lives. Looking ahead, those same strengths — plus Kentucky’s highly skilled workforce and low cost of doing business — point to long-term growth.

“Kentucky offers companies unique transportation advantages, placing them within a day’s drive of roughly two-thirds of the U.S. population and personal income and offering a multitude of transportation methods through the state’s extensive network of highways, railways and navigable waterways,” said Jeff Taylor, business development commissioner at the Kentucky Cabinet for Economic Development. “Businesses in the industry have continued announcing new projects and expansions even during these very uncertain times, and we aim to carry that momentum forward into the post-COVID economy.”

In 2020, distribution and logistics led all Kentucky sectors in announced jobs (1,671) and placed second in announced investments ($313 million). The industry followed that up in 2021 with an additional 1,050 new jobs behind over $181 million in new investments. 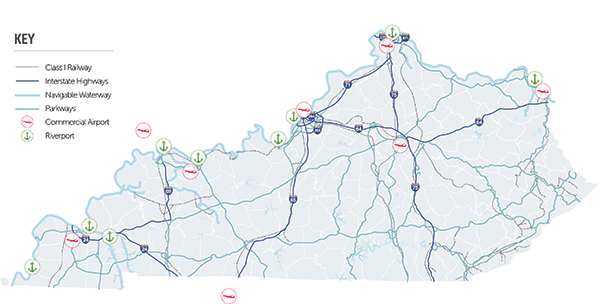 Distribution and logistics infrastructure in Kentucky.

Courtesy of the Kentucky Cabinet for Economic Development

Companies making these announcements ranged from Dollar General Corp., which in 2021 opened a new 300-job distribution facility in the Northern Kentucky community of Walton and a 130-job facility in Bowling Green, to Conner Logistics Inc., a third-party logistics provider that relocated its corporate headquarters from California to Somerset in Southeastern Kentucky, creating 20 full-time jobs with plans for future growth.

The sector has continued to expand in 2022, with the January announcements that Levi Strauss & Co. plans to create 300 jobs with a new e-commerce distribution center in Erlanger, a project that includes a more than $48 million investment, while the Kroger Co. announced 161 jobs at an e-commerce spoke facility in Louisville.

In total, the state hosts nearly 590 logistics and distribution facilities, which employ close to 78,000 people statewide.

But of equal importance are businesses that underpin distribution and logistics, such as conveyor and automated sortation equipment producer Material Handling Systems Inc. (MHS). Headquartered in Mt. Washington, Kentucky, MHS combines advanced technology with precision manufacturing to help logistics companies connect the world with the products it needs.

Considering the ever-rising demand for fast, reliable delivery of goods, the distribution and logistics sector will be a focal point in the years ahead — and Kentucky sits at the center of the industry’s imminent growth.