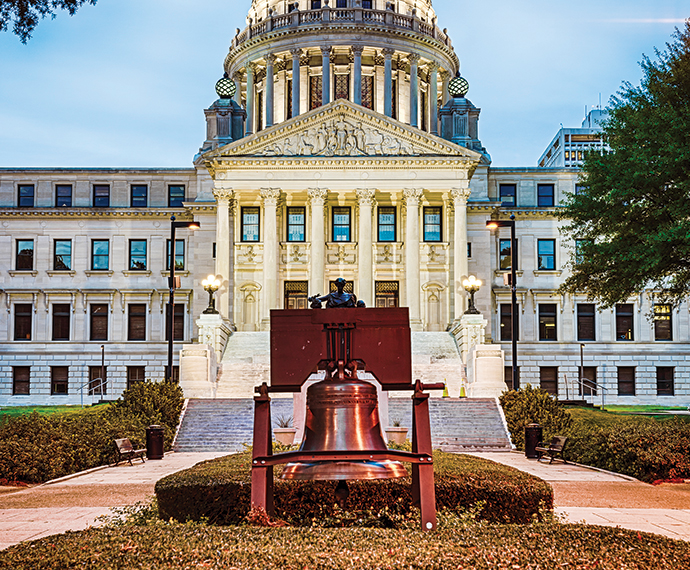 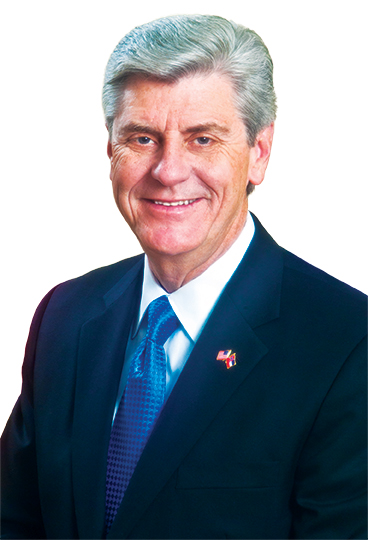 “If we get a company to come and see our infrastructure, workforce, tax environment and low union rate, they will want to move here.”
— Gov. Phil Bryant

When Mississippi Gov. Phil Bryant marked his 62nd birthday Dec. 9, he had a lot to celebrate. Since taking office in 2012, Bryant has accomplished a great deal each year for the Mississippi economy, but 2016 topped them all.

Culminated by a record-setting deal from Continental Tire, Mississippi produced unprecedented results in economic development in 2016. And once mankind eventually lands on Mars, Mississippi's space program will have played a pivotal role.

Gov. Bryant recently discussed these and other triumphs with the Mississippi Development Guide.

What have been some of the most significant economic development accomplishments in Mississippi over the last two years?

GOVERNOR PHIL BRYANT: Governors have the greatest opportunity to make a difference when it comes to economic development. It encompasses everything else in the state. The companies coming here are the sun. Everything else revolves around that solar system.

The most recent is Continental Tire — the sixth largest manufacturer of tires in the US. We competed with a number of other states to land this project. This will be a $1.45-billion capital investment with more than 1 million square feet and 2,500 jobs. It is located between Jackson and Clinton. That is a critical location for this plant. When we open it in fourth quarter of 2019, we think it will grow. This will be the most technologically advanced plant ever built by Continental.

On Feb. 8, 2016, I asked the Legislature to incentivize Continental Tire and Edison Chouest Offshore — one of the nation's largest suppliers of offshore platforms and systems. I asked them to invest almost $275 million. This will result in 1,000 jobs for ECO at the Port of Gulfport.

They decided to come to Mississippi to build ships. We also had Yokohama Tire Company which had looked at 28 states and settled on West Point, Miss. — one of the highest unemployment areas in the state. We now have three major tire manufacturers — Cooper Tire, Continental Tire and Yokohama Tire. We manufacture nearly 500,000 vehicles a year.

We also make Nissans and Toyotas. Japan's two largest automobile manufacturers are located here in Mississippi. No other state has that.

Raytheon added another expansion in Forest; they make the most advanced radar systems in the world there. Now we are partnering with Raytheon to make the T100 engine for the US Air Force. I will be going to Israel next week to inspect a T100 facility there.

The largest plywood plant in North America is located here. It had been destroyed by an F4 tornado — but since then they have rebuilt and 400 jobs were added there. The furniture industry here has had a total renaissance. It is now coming back with companies like HM Richards, which added 500 jobs last year. Ashley Furniture expanded to make it the largest upholstery furniture plant in the world in Ecru.

We are looking at Southern Motion which is adding another 600 jobs in Northeast Mississippi. Feuer makes the drive shaft for the Titan pickup and opens in Robinsonville.

How have you been able to make the Mississippi business climate better during your time in office?

BRYANT: Making a tax-friendly state is the key. I have been able to cut taxes on corporations more than 40 times — such as the franchise tax which we are beginning to phase out. It had everything to do with profits. It was a tax on growth and expansion. We did away with the inventory tax. Those are two major opportunities we have had to make Mississippi much better. We now have one of the best tax environments in the U.S.

The workforce also is critical. I started working five years ago to have a vertically integrated workforce training system in place in Mississippi, starting in middle school and high school. We started dual enrollment with high school and community college. The Legislature invested $50 million last year into the Mississippi Works Fund. It came from the reserve account of our unemployment agency. In some areas in Northeast Mississippi it is now down to 5 percent. We built up our reserves by not paying out so much unemployment compensation. Companies hate to pay that premium which pays people not to work.

We invest in our community colleges. We will create the Furniture Academy in Northeast Mississippi to train the workforce there. Community colleges will receive grants for workforce training for our targeted industries. We will train the advanced workforce that we need. We need more engineers. We need managers coming from our universities. We have a strategic workforce training plan that goes all the way from middle school through college. We were the first state to complete our state Workforce Investment Opportunity Program and submit it to the Department of Labor.

Your proposed budget stresses saving for the future, spending prudently and prioritizing the core functions of government. What are some highlights of this plan?

BRYANT: The most important part is that we make sure we don't spend more than 98 percent of our revenue. We have to have the determination to control our budget. We have to manage this state like a business. We will make certain that we will adhere to the 98 percent rule adopted in 1997. Companies understand this. You can't use one-time money to pay salaries. We will spend one-time money only on one-time expenses. We can maintain assets with those funds rather than borrow funds. We will build up our rainy day fund which is now more than $300 million. We will have a reserve we can draw upon to get us through the hard times. Our budget has grown 26 percent over the last five years. We need to have the discipline to manage that.

Our indicators are that our economy will begin to come back again. We see a revitalization of our economy. We do not have a deficit. We have always had money in our rainy day fund. We added another $16.4 million for public education. We graduated over 80 percent of our students that are in our high schools for the first time this year. Numbers in the past were much lower than that. And for our third-graders, we installed the third-grade reading gate. We have improved our reading and math at the fourth-grade level. We led the nation in that.

You have announced $114 million in economic and environmental restoration projects for the Coast. What will this mean for the economy of coastal Mississippi?

BRYANT: You will see it continue to grow. It has been a success story like none other. Katrina totally and completely destroyed almost 90 miles of the Mississippi Gulf Coast. It is now a vibrant location.

The casino industry had its best year ever on the Gulf Coast. These restoration projects are critical. We intend to produce a million sacks of oysters. We intend to be the seafood capital of the world, especially in shrimp and oysters.

Also, if you look at Ingalls Shipbuilding, the most advanced warships in the world are built there. Six are under construction right now at Ingalls for the U.S. Navy — the largest number ever.

There are 11,000 employees at Ingalls now — the most of any employer in Mississippi. Chevron is refining at Pascagoula. And Gulfport has become a Port of the Future.

We brought in three 60-ton cranes to offload containers more efficiently. We are one of the largest fruit and vegetable ports in the U.S. McDermott makes pipe on site. We have a large resort destination on port property. We will move and replace the storm drain pipes that are flowing into the Gulf. That will be a huge project.

What will be the long-term impact of the Continental Tire project in Mississippi?

BRYANT: We invested $263 million in Continental Tire and $11 million in ECO. The long term of that would be tens of thousands of jobs over the next 50 years. Continental Tire intends to be here for the next 80 years. It totally transforms the community. This was a large wooded area with little if any opportunity for job creation until we brought Continental Tire and began clearing a large site for this multi-million-square-foot facility. You will see tier 1 suppliers come to this campus. A training facility will be located near that campus. Support — restaurants, hotel, stores — will grow around that plant.

What is the importance of the Complete 2 Compete initiative in Mississippi?

BRYANT: It is one of the most exciting things we have done.

Over 200,000 people in Mississippi have attended college but did not complete their degrees. We have 57,000 who could receive an associate's degree today. They left school before being credentialed. We will bring them back and make sure they receive an associate's degree. When they apply for a job, they will not look like a college dropout. We have 10,000 who could receive a bachelor's degree with no additional course work. This will encourage them to come back and it will give them the pride of receiving a diploma and put them in a better position in the workforce. They will now be a college graduate. This is a very creative opportunity for us. If we could do that, our graduation rate will go to around 40 to 45 percent. It is around 30 percent today. It is a very important workforce development program. 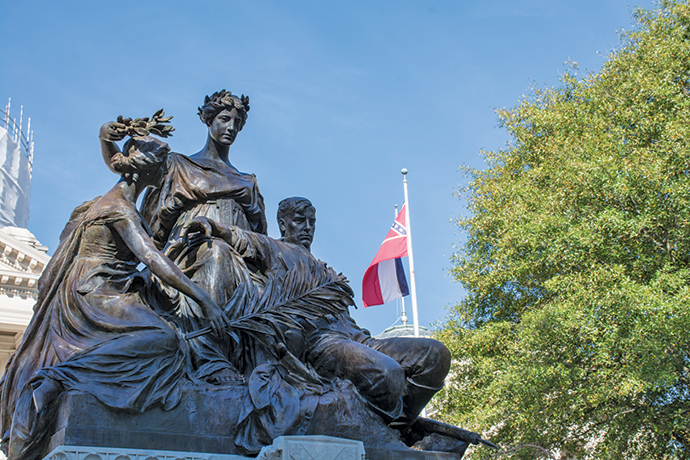 The Women of the Confederacy Monument, designed by Belle Marshall Kinney and cast in 1917, sits before the Mississippi State Capitol building in Jackson.
Photo by Heather Overman