Where the Cool Research is Conducted 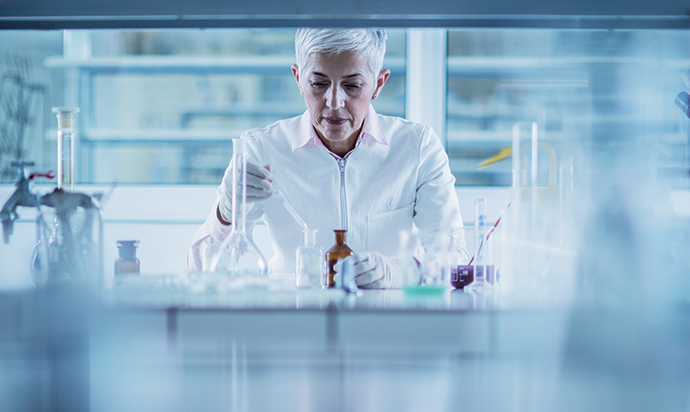 Executives at Ocean Springs, Mississippi-based Skylar Laboratories (formerly Phlight Pharma) didn’t need to look outside the Magnolia State for a research program to support. They found just what they were looking for at the University of Mississippi’s School of Pharmacy — its National Center for Natural Products Research (NCNPR), specifically. The executives, with no direct ties to Ole Miss, made a $200,000 gift to the center in September 2019, half of which will be used to discover new medicinal properties in plants.

“We were impressed by the international expertise the center has regarding natural products,” said Clark Levi, owner and president. “We have a dream that we can find a natural product that ultimately can be grown, processed and distributed as a prescription product — all within the state of Mississippi.”

Skylar Laboratories markets Allzital, a prescription product for tension headaches, and Synerderm, a medical device designed to help relieve the discomfort of various skin diseases. It also has affiliated organizations owned or co-owned by Levi, including Larken Laboratories, a nationwide distributor of generic products, and Alvix Laboratories, which repackages pharmaceutical products for specialty pharmacists throughout the nation.

The NCNPR conducts basic and applied multidisciplinary research to discover and develop natural products for use as pharmaceuticals, dietary supplements and agrochemicals, and to understand the biological and chemical properties of medicinal plants.

“The NCNPR is the nation’s only university-affiliated research center devoted to improving human health and agricultural productivity through the discovery, development and commercialization of pharmaceuticals and agrochemicals derived from natural products,” says Ikhlas Khan, the center’s director.

There’s plenty more R&D under way at the Oxford campus, too.

Graphene, Plastics Under the Microscope

In October 2017, Ole Miss established a new center to advance translational science and engineering of graphene-based technologies — the Center for Graphene Research and Innovation. Its focus is to bridge the gap between university-based science and discovery and industry-led innovations and applications for graphene, a form of carbon made of a single layer of atoms. First isolated and described by scientists in 2004, the material is incredibly strong and flexible, and its conductivity lends it to a broad range of applications ranging from manufacturing to electronics to medicine.

Establishing the center aligns with UM’s status as a Carnegie R1 highest research activity institution and the growth of research in graphene and related nanostructure materials at the university over the last decade, Chancellor Jeffrey Vitter said. “The Center for Graphene Research and Innovation will serve as a hub connecting research activities across multiple disciplines and departments and will propel the university forward in this field,” Vitter said.

Still more research at Ole Miss is tackling the plague of plastics, particularly in Mississippi’s waters. The American Chemistry Council estimates that U.S. production of major plastic resins totaled 7.4 billion pounds during June alone with production for 2019 reaching well over 40 billion pounds. Only a fraction of that plastic is recycled, composted or combusted with energy recovery. Most is sent to landfills or — even worse — tossed on the side of the road. Sunlight, water, wind and microorganisms slowly break down these plastics into microplastics, small plastic bits less than 5 millimeters long, or about the length of a mosquito.

“These small plastic particles not only accumulate in the food chain but attract contaminants, including toxic heavy metals, persistent organic pollutants and pathogens,” says James Cizdziel, an associate professor in the Department of Chemistry and Biochemistry who joined the Ole Miss faculty in 2008. “Rivers act as conduits for pollution, including microplastics, to coastal areas, where the majority of seafood stems from.”

Cizdziel’s research focuses on assessing microplastic pollution in the Mississippi River and oyster reefs in the northern Gulf of Mexico. He is working to quantify the concentrations and loads of microplastics and characterize their shapes, size distribution and chemical composition in the Mississippi River system as well as at oyster reefs in the Mississippi Sound estuary. While the problem is being studied elsewhere, Cizdziel’s research is focusing on smaller microplastics that typically can’t be seen with the naked eye, but instead require sophisticated analytical instrumentation. The research also is seeking to understand the interactions of mercury and microplastics — two global pollutants — and educate young scientists and the public on the emerging issue.

Meanwhile, in Starkville, critical research is under way at Mississippi State University that’s backed by a $3.08 million grant from the U.S. Army Engineer Research and Development Center that will support the Army’s ground mobility research in several key areas. Led by MSU’s Center for Advanced Vehicular Systems (CAVS), the project addresses areas such as remote sensing on autonomous vehicles, additive manufacturing, human performance and modeling and simulation development powered by the university’s High Performance Computing Collaboratory. The research will be among the first to utilize the Proving Ground, a 50-acre property recently acquired by CAVS to advance the center’s off-road autonomous vehicle research. CAVS Extension, the center’s industrial outreach facility located in Canton, Mississippi, has generated over $6 billion in economic impact since 2006.

“This is a really exciting project with ERDC and a great continuation of our off-road autonomous mobility research, much of which is done in support of the Army,” says Clay Walden, CAVS executive director. “In addition, we are developing a digital twin of the Proving Ground, which will allow us to develop autonomous environmental sensing algorithms and then test them on the physical property.

Based in Vicksburg, ERDC is the research unit of the U.S. Army Corps of Engineers and is one of the premier engineering and scientific research organizations in the world.

The project is managed by ERDC’s Geotechnical and Structures Laboratory. Robert D. Moser, senior scientific technical manager for the ERDC lab, said the new partnership builds upon MSU and ERDC’s strong history of innovative research and development programs and will support the Army’s future battlefield mobility needs. “This new effort, supported through ERDC’s Military Engineering applied research program, will develop advanced capabilities for autonomy, mobility and materials manufacturing that are strongly aligned with ERDC science and technology efforts under the Next Generation Combat Vehicle modernization priority of the Army Futures Command,” says Moser.

Based in Vicksburg, ERDC is the research unit of the U.S. Army Corps of Engineers and is one of the premier engineering and scientific research organizations in the world. MSU and ERDC have a long-standing research relationship and have collaborated on dozens of projects. In 2014, the two partnered to create the Institute for Systems Engineering Research, also housed in Vicksburg.

Mississippi State University is classified by the Carnegie Classification of Institutions of Higher Education as a “Very High Research Activity” R1 doctoral university. MSU’s research expenditures totaled nearly $244 million in FY 2018, accounting for more than half of the total research and development expenditures reported by all Mississippi institutions.

As it works to support the state’s $8-billion agriculture and forestry industry, MSU’s $105 million in R&D expenditures in agricultural sciences in FY18 places the university in the nation’s top 5%. MSU manages agriculture and forestry experiment stations located strategically throughout the state, in addition to Extension offices in each of Mississippi’s 82 counties. These research centers address issues relevant to Mississippi farmers, industry, communities and families. The Delta Research and Experiment Station in Stoneville, consisting of almost 5,000 acres, is a world-renowned center for agricultural research on commodities such as cotton, rice, soybeans, corn and catfish.

Since its founding in 1948, MSU’s Raspet Flight Research Laboratory stands out as one of the university’s most long standing and prominently established research entities with a 70-year history of excellence. Raspet continually advances modern concepts in experimental aviation through the research, development, testing and evaluation of Unmanned Aircraft Systems (UAS) and their associated technologies. Mississippi State also leads the FAA’s national Center of Excellence for Unmanned Aircraft Systems and the Department of Homeland Security’s Systems Demonstration Range Facility for UAS.

Mississippi State University is Mississippi’s top research university in the latest report from the National Science Foundation. MSU also retains its status as a top 100 research institution in the recently released NSF Higher Education Research and Development Survey for Fiscal Year 2018. With $244 million in total research and development expenditures, MSU ranks 98th nationally, is 61st among non-medical school institutions and is 67th among public universities.

“MSU’s ongoing success as an R1 research university is due to the exceptional work of our dedicated faculty researchers and scientists,” said MSU Interim Vice President for Research and Economic Development Julie Jordan. “This high level of research is being conducted in state-of-the-art facilities and provides more students than any other institution with the opportunity to have a positive impact on the lives of others in Mississippi while earning their degrees.”

MSU ranks in the top 15 nationally in both agricultural sciences (11) and social sciences (12). For the seventh consecutive year, MSU leads all Southeastern Conference universities in social sciences research funding. MSU leads the state with nearly 4,000 research personnel, including 661 principal investigators.

In addition to its high NSF status, Mississippi State is the only university in the state to achieve Innovation and Economic Prosperity University status from the Association of Public and Land-grant Universities and its Commission on Innovation, Competitiveness and Economic Prosperity. The designation — attained after a rigorous review process — recognizes Mississippi State for working to advance engagement and economic well-being in the state, region and nation.