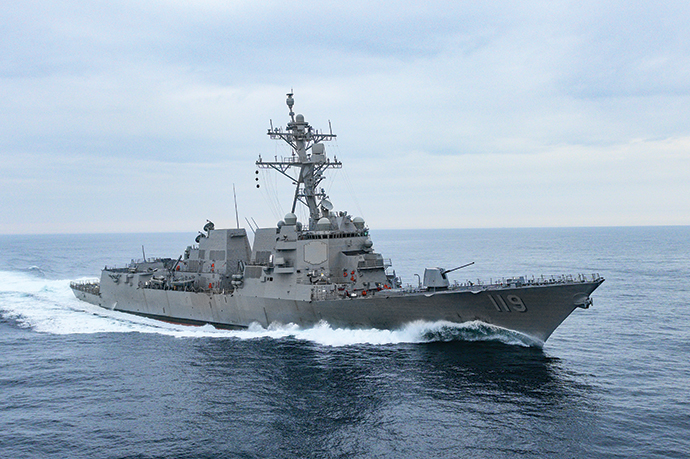 As a seven-term United States senator with nearly 50 years in public service, William “Thad” Cochran was a fixture in Mississippi politics. A former ensign in the Navy, Cochran first was elected to congress in 1972 and served until the year before his death in 2019.

So, it’s fitting that the Navy’s latest guided-missile destroyer, the USS Thad Cochran, is to be built in Cochran’s home state, in honor of a leader who lent steadfast support to shipbuilding programs for the Navy, Marine Corps and Coast Guard.

The USS Cochran, an Arleigh Burke DDG-51 class warship, is being built under a $936 million Navy contract announced in 2020 by Huntington Ingalls, Inc. Located on 800 acres in Pascagoula, Huntington Ingalls has been building guided-missile destroyers since 1990 and has delivered 32 to the Pentagon, the most recent of which was commissioned in September 2020. The Burke-class ships are the backbone of the Navy, designed to fire Tomahawk missiles and engage in anti-aircraft and antisubmarine warfare.

“If you’re looking for a workforce that is ready and available and a community that reaches around the workforce to help enable them and train them, and if you’re looking for a state that will partner with businesses to be all you can be, Mississippi’s the state to come to,” said Brian Cuccias, then Ingalls president, before his retirement in the spring of 2021. His replacement, Kari Wilkinson, is the first woman to lead the company.

A State that Backs Expansion

Shipbuilding is one of Mississippi’s most important industries. More than 33 shipbuilding-related manufacturers employ more than 23,450 skilled workers. Halter Marine, also based in Pascagoula, is the largest designer and builder of medium-sized vessels in the world. It operates one full-service repair facility and three new construction facilities in Mississippi. The company designs, builds and repairs a wide variety of oceangoing vessels such as patrol boats, oil recovery vessels, logistics support vessels, auxiliaries and research and survey vessels.

In 2019, Halter Marine won a $746 million Navy contract to build three heavy polar icebreaker cutters for the Coast Guard. In 2020, sister company ST Engineering Halter Marine and Offshore (STEHMO), announced a $10 million expansion of a Pascagoula facility that’s to create 100 new jobs, more than doubling that single facility’s workforce. The expansion, the company said, will allow it to perform new commercial repair work for larger ships and oil platforms, and include machinery and building upgrades.

Shipbuilding is one of Mississippi’s most important industries. More than 33 shipbuilding-related manufacturers employ more than 23,450 skilled workers.

To help facilitate the expansion, the Mississippi Development Authority (MDA) is providing assistance to offset the cost of dredging and approved the company for the Advantage Jobs Rebate program, which provides a rebate to eligible businesses that create new jobs that exceed the average annual wage of the state or the county in which the company locates or expands.

“It has been a pleasure working with MDA and all the stakeholders on the plan to upgrade STEHMO’s facility,” said STEHMO President Nian Hua Lim. “With these developments, STEHMO will be in an excellent position to grow the marine and offshore business and create more employment opportunities for the Gulf Coast community.”

In addition to financial incentives and a strong workforce, Mississippi’s Gulf Coast location is a key component of its shipbuilding industry. The state offers shipbuilders access to more than 15 ports located along the Gulf, the Mississippi River and the Tennessee-Tombigbee Waterway. The ports of Pascagoula and Gulfport provide deep water access to global commerce.

Gulf Ship, in September 2020, announced a $7 million expansion that’s to create 200 jobs and facilitate a new contract for world-class tugboats. The specialty shipbuilder and supply company was founded in Gulfport in 2006 and uses its 38-acre shipyard there for the construction and upkeep of tractor tugboats and platform supply vessels. MDA is providing grant funding of up to $900,000 for improvements to the facility.

Also in 2020, Rolls-Royce announced plans to expand its facility in Pascagoula, where it manufactures ship propellers for the Navy. The Defense Department is providing $22 million toward the project as part of its COVID-19 response.

“These investments,” DOD said in a statement, “will have long-term benefits for the U.S. Navy and the Gulf Coast region.”

Rolls-Royce is installing new machine tools to support production of propellers across all of the Navy’s shipbuilding programs. Its Pascagoula facility is only one of two facilities that manufactures propellers for the Navy.