University of Missouri – Columbia
is a leader in athletics, research and more. 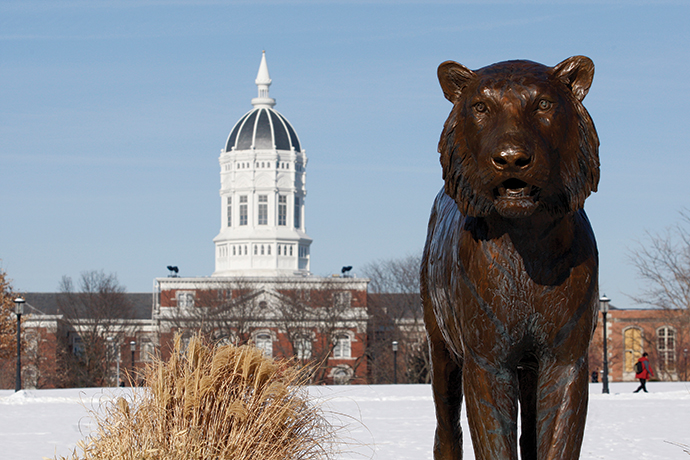 University of Missouri – Columbia (Mizzou) is a public institution that was founded in 1839, and has a total undergraduate enrollment of 25,898 on its 1,262-acre campus. The university's hometown of Columbia is in central Missouri and is host to annual events like the Roots 'n Blues 'n BBQ music festival and Art in the Park, a large creative works showcase.

Students at Mizzou live in a unique botanical garden, with more than 40,000 plants across campus. More than a third of high school seniors from Missouri attend Mizzou each year, and all freshmen must live on campus. As the only Division I-A sports school in the state, the Missouri Tigers teams are a big focus of campus life. The teams compete in the NCAA Division I Southeastern Conference and are particularly competitive in football. The school mascot, Truman the Tiger, is named after former President Harry Truman, who was born in Missouri.

Mizzou has more than 600 clubs and organizations for students. More than 20 percent of students join the school's Greek system, which is made up of 50-plus fraternities and sororities. Students also have a vast array of degree options, with more than 280 majors, nearly 70 of which can be completed online.

Mizzou has highly ranked graduate programs at the College of Education and Robert J. Trulaske, Sr. College of Business, as well as a School of Medicine and a Tier 1 School of Law. This public research university offers opportunities for students to team up on faculty-led projects as early as their freshman year. Among the scores of notable Mizzou alumni are actor Jon Hamm, singer Sheryl Crow and U.S. Sen. Claire McCaskill. Playwright Tennessee Williams, who won the Pulitzer Prize for "A Street Car Named Desire," attended but did not graduate.