A history of innovation drives stainless steel production and remanufacturing. 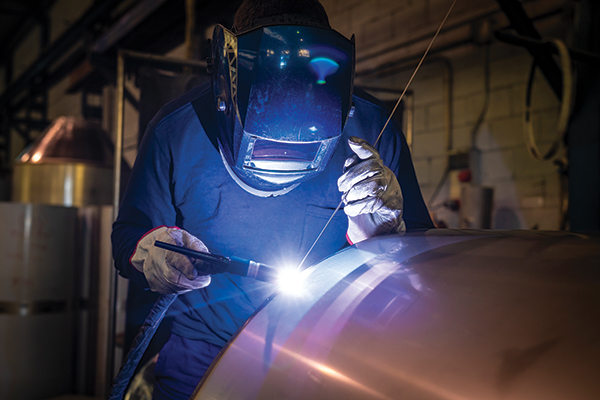 Springfield, Missouri, is known as the nation’s “capital of stainless steel,” making it a shining example of how a single individual can bend the arc of history. Of the 30-plus companies active in the region’s steel business, most have their headquarters right there in Springfield. And most are part of a complex family tree that starts with the Paul Mueller Company, founded in Springfield in 1940.

Mueller’s original operation comprised 27,000 sq. ft. on a three-acre lot. Today, the company employs some 600 workers at a 1-million-sq.-ft. manufacturing plant on a 50-acre site. Having expanded into markets overseas, the Mueller Company also operates outposts in Iowa, the Netherlands and Vietnam.

Known not only for its brilliant luster, stainless steel is singularly resistant to corrosion and staining, which makes it ideal for storage tanks used in the food, beverage, pharmaceutical and chemicals industries. The Mueller company has even leveraged the craft beer boom by designing a system for storing and serving beer that eliminates the need for bulky kegs and the space needed to store them.

The regional supply of skilled workers that Mueller spawned is key to the industry’s strength in southwest Missouri. Approximately 3,000 employees work in the industry, which accounts for about one out of five manufacturing jobs in the region.

“The concentration of metal fabricators provides a strong labor force for this industry,” says Jason Floyd, President of Tank Components Industries (TCI), a maker of stainless steel and nickel alloy components for metal fabricators. “The depth of talent and skill,” says Floyd, “far surpasses that of other industries in the area.”

The same skilled workforce that propels the stainless steel industry has served to turn Springfield into a hub of remanufacturing. “Reman” is not the same as rebuilt or repaired. It’s a complex process that involves taking used parts and other components and completely cleaning, lubricating and rebuilding every single piece. The resulting end products, for all intents and purposes, function like new ones, and at significant cost savings.

The range of consumer products serviced by Springfield’s reman cluster includes marine, automotive and large commercial equipment for the off-highway, agriculture, defense, construction, power generation, mining and trucking industries. Leading lights of the industry include SRC Holdings, founded in Springfield in 1983. Having since grown to encompass 10 divisions, SRC has evolved beyond remanufacturing to include warehousing, logistics, salvaging, packaging and core management.

Springfield also is home to three John Deere Reman factories, which makes it the hub of the company’s remanufacturing operations. Deere Reman builds engines and electronics components for agricultural and construction equipment.

“Each part is disassembled and cleaned before going through multiple inspection and qualification processes,” says Josh Kempel, John Deere Reman’s Global Sales and Marketing Manager. “All critical dimensions are measured and brought back to OEM specifications,” Kempel says. “Our reman parts cost 25% to 30% less than new components, which means lower repair and overall ownership costs for John Deere equipment.”

In March 2021, Deere & Company announced plans to expand reman operations in Springfield, thus adding 130 new jobs to a workforce that previously stood at about 400.

The company is adding drivetrain and hydraulic remanufacturing to its existing operations, which launched in 1998. To support the expansion, Deere tapped into state support including Missouri Works, a program that helps businesses access capital through withholdings or tax credits to embark on development projects.

“By consolidating operations and creating a center of excellence in Springfield, the company is well positioned for future growth,” says Jena Holtberg-Benge, Manager of John Deere Reman Business.

In addition to state programs, reman firms in the region are supported by focused programs at Ozarks Technical Community College and Missouri State University, as well as a unique, year-long learning experience called Greater Ozarks Centers for Advanced Professional Studies (GO CAPS), which allows high school juniors and seniors to test drive future career options while embedded in partner businesses. GO CAPS is managed by the Springfield Area Chamber of Commerce and involves a consortium of 20 area school districts.