Agtech is a natural for Missouri. 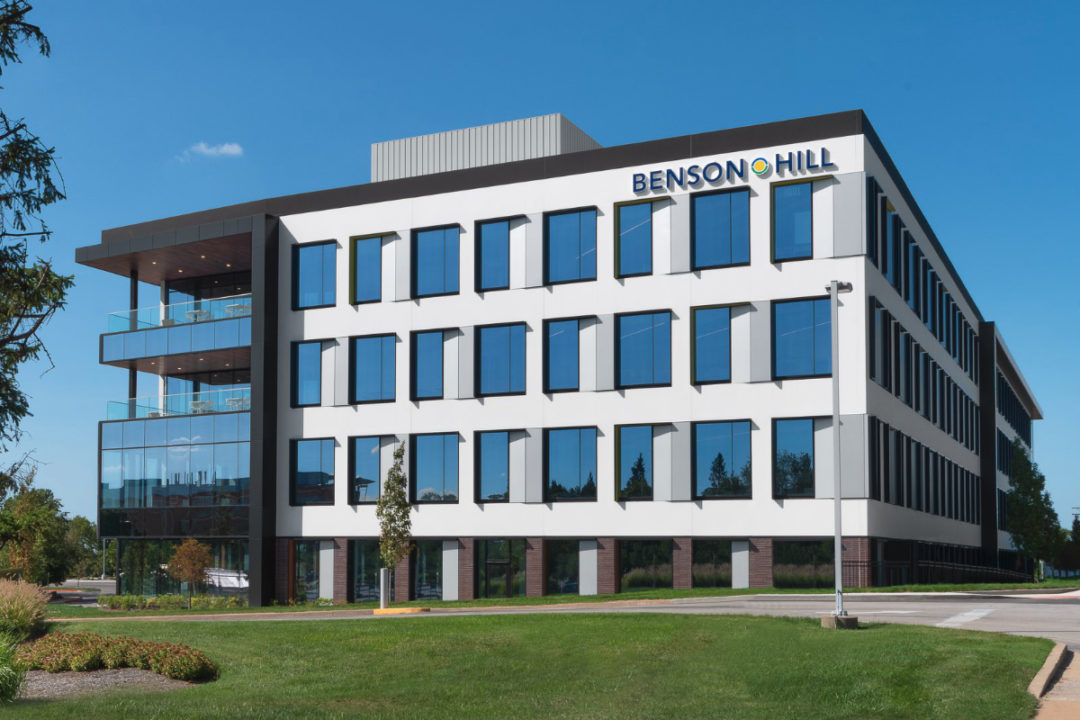 Plowing as it has through the pandemic, Missouri agtech startup Benson Hill has managed to till the soil for what looks to be a bountiful future. Over a rapid-fire series of months, the company founded in 2012 has been valued at $2 billion, completed a new $52 million headquarters in St. Louis, announced another physical expansion, doubled its planted acreage under contract and signaled an initial public offering for the fall.

So, who are these people? They are, according to CEO Matt Crisp, a “crop improvement company,” and currently the engineers of souped-up soybean seeds Benson Hill’s new headquarters in St. Louis. Source: Benson Hill Agtech is a natural for Missouri. P by GARY DAUGHTERS planted this year on 70,000 acres by “grower partners” across the Midwest. These seeds can deliver crops that are tastier, more nutritious, better digested and more sustainably grown, says Crisp.

“We’re a technology company that is focused on tapping into the natural genetic diversity of plants to make a seed that’s just better from the beginning,” he explains. “Data science is a core component that underpins what we do. How can we do prediction and use machine learning and artificial intelligence to understand how we might breed better crops? We’re tapping into that genetic diversity to create high value products for a diverse set of end markets.”

Benson Hill’s operations formerly were split between St. Louis, Missouri, and North Carolina’s Research Triangle Park. When the company decided to consolidate, those two locations were the only options considered. The decision fell in favor of the EDGE@BRDG site at St. Louis’s Danforth Center, known as the world’s largest independent plant science research center. Benson Hill’s staff has more than tripled, to more than 300, in the past three years. It turns out to have been a very good decision.

“St. Louis has the highest concentration of plant science PhDs in the world,” says Crisp. “So, there’s a plethora of good talent here. The second component is you’ve got to have the infrastructure. And here, we have the Danforth Center, with over 50,000, sq. ft. of greenhouse space, core laboratories and other functions that enabled us really early in our life cycle to punch above our weight. And then the third — and really foundational piece of all this — is money. You’ve got to have money.”

Which is something Benson Hill found in abundance in St. Louis, as witnessed by its recent double-unicorn valuation. But can the Midwest compete with the coasts for venture capital?

“For investors,” says Crisp, “being in the heartland really mattered. As a company like ours that has matured, being in close proximity to our grower partners is really meaningful. The majority of U.S. agriculture is within about a 500-mile radius to St. Louis. That means we can get in our cars, drive to field trials and meet with our grower partners. If you tried to do that from San Diego or New York or something, that’d be quite a haul. This proximity real works well for us.”

Benson Hill’s grower partners, says Crisp, include farmers who cultivate as few as 100 acres and growers planting in the thousands of acres.

“We call them ‘grower partners’ because it’s a bilateral relationship,” he says. “We’re not selling them something. We’re interacting with them to grow, in an identity preserved manner, this proprietary crop. We’ve got dozens that we’re engaged with all over the Midwest

A Fertile Field for Growth

The new Benson Hill headquarters at the Danforth Center is situated within 39 North, a civic development that is a textbook example of a region playing to its strengths. It is a long-term effort to link the city’s agtech community through corridors of greenspace, residential properties and businesses. The driving idea is to create even more jobs and to lure even more high-tech talent. Benson Hill’s new crop accelerator, expected to open in the fall, is just the type of addition envisioned by 39 North’s planners

“It’s just a golf shot away from our headquarters inside this 600-acre campus,” says Crisp. “It’s a nearly 50,000-sq.-ft. facility where we’re able to essentially accelerate the breeding process. You’ve got to cross these plants and grow them out and test them, and our accelerator will allow us to go more than two times as fast as what we would be able to do if we were conducting that work in the field. And simultaneously increase the throughput. This is one of the benefits of our location in 39 North. We’re really proud to be here.”

Crisp says big, incumbent companies “are beginning to realize that innovation from small organizations willing to think beyond incremental improvements is becoming of extraordinary value.”

That makes ecosystems like the one St. Louis, Missouri, is nurturing among the industry’s most valuable players.