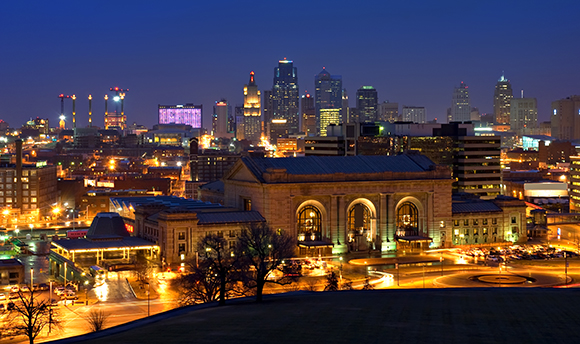 On the banks of the Missouri and Kansas Rivers, the Kansas City region has grown into a North American powerhouse for industry. Across the city and the broader region, Kansas City has demonstrated steady momentum across sectors.

The greater Kansas City region includes the cities of Independence, Lee’s Summit, Blue Springs, Liberty, Raytown, Gladstone and Grandview, among many others.

Kansas City is home to a highly skilled and well-educated workforce more than 1.1 million strong. Kanas City companies have access to some 100,000 students at colleges and universities across the broader metro region, including those in neighboring states. Talent pipelines are fueled by higher education institutions in the region including the University of Missouri - Kansas City, Kansas City University, Kansas City Kansas Community College, Johnson County Community College and several others.

Missouri’s largest city, Kansas City is located at the crossroads of four major interstates, three major highways, five railways and the Kansas City International Airport – which moves more air cargo each year than any other airport in a six-state region. Five of the seven major rail lines in the country converge in Kansas City, making it the center of America’s crossroads. Additionally, Kansas City is located along the nation’s largest navigable inland waterway, the Missouri/Mississippi River system.

The Kansas City region supports a variety of businesses and industries including health innovation, logistics and financial services. Numerous Fortune 100 companies operate in the area and several major companies have headquarters in the city, such as Cerner Corporation, Hallmark and H&R Block. Kansas City is a also a key hub for automotive manufacturing in the state.

The KC region is supply-chain centered, and in the past five years has successfully attracted e-commerce and distribution companies pledging to create more than 10,200 jobs, invest $1.8 billion and occupy 16.7 million sq. ft. Additionally, the SubTropolis in Kansas City is the largest underground warehousing and distribution park in the United States.

In November 2020, Kenco Logistics Services, LLC., announced it would locate in a new 295,600-sq.-ft. warehouse and distribution operation at Liberty Logistics Park in Liberty, Missouri. Liberty, Missouri is a center for logistics excellence, and was named among the Top 10 U.S. Central Warehouse Sites due to its operating cost comparisons. With the global pandemic, companies are looking to KC for lower-cost, more favorable tax regimes for their supply chain facilities.

“The KC region’s central location and access to a skilled workforce are key drivers of a successful e-commerce strategy,” said Tim Cowden, president and CEO of the Kansas City Area Development Council. “The KC SmartPort team and our partners in Liberty continue to elevate our region’s competitive advantages to position KC as a leading logistics hub.”