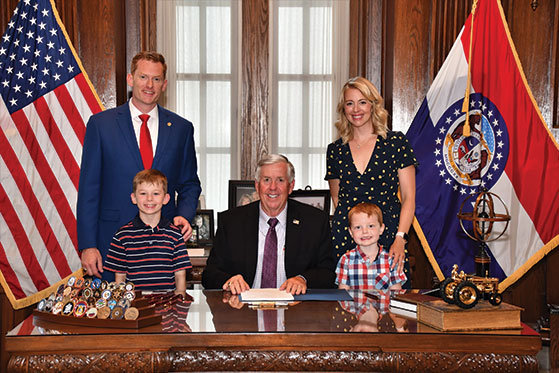 Rep. Grier and his family with Gov. Parson during the signing of HB 2046.
Courtesy of Representative Grier
by SAVANNAH KING

Last summer, Missouri Gov. Mike Parson began removing barriers to employment by signing a bill that expanded licensing reciprocity in the state. House Bill 2046 allows workers licensed in others states to be licensed in Missouri and work in the state.

Additionally, HB 2046 removes the requirement that only Missouri residents are eligible for license reciprocity. Specifically, the bill expands reciprocity to any individual holding a current, valid license who has been licensed for at least one year at the same practice level as Missouri in any profession regulated by a state board, department or office of a jurisdiction.

“By expanding license reciprocity, HB 2046 will eliminate governmental barriers to employment and allow citizens to become licensed faster when moving or needing to find work in Missouri,” said Gov. Parson. “This will not only help fill critical jobs in our economy but also highlight Missouri as an ideal state to live and work.”

In June 2021, Gov. Parson signed another bill, HB 476, into law that allows military and veterans members to use their relevant military training toward an occupational license. Missouri has a sizable military population with three military bases, including Whiteman Air Force Base, Rosecrans Air National Guard Base and Fort Leonard Wood Army Base.
Both bills were sponsored by Rep. Derek Grier, who has become a national expert on licensing reciprocity and appeared on a White House call about the subject last year. In a May 13, 2021, Missouri Times interview, Grier explained the latest licensing bill was aimed to assist members of the armed forces who had expressed difficulty finding work after their service.

“It can often be very challenging for them to find jobs after they come out of the military, and one of the specific reasons for that was their specialty training isn’t always recognized, or they have to do a lot of duplicative training,” Grier told The Missouri Times in May. “We passed the most comprehensive regulatory reform in the country last year, so we thought it would make sense to recognize the training from the military if it correlates to a professional license.”