From Farm To Table

New Jersey’s food and beverage business grows from the ground up. 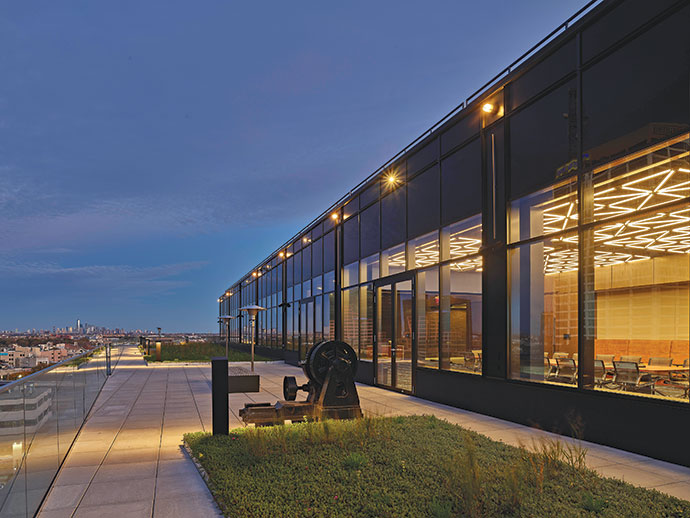 New Jersey is called the Garden State with good reason. With more than 9,000 farms spread across some 750,000 acres, New Jersey generates tens of billions of dollars in farm revenue annually.

In total, New Jersey farmland yields more than 100 different varieties of fruits, vegetables, and herbs and is ranked in the Top 10 nationally in blueberries, spinach, asparagus, peaches, bell peppers, squash, tomatoes and cranberries. From that foundation springs a thriving food and beverage industry that has grown to include more than 50,000 food manufacturing companies, R&D facilities, retailers and farms — employing more than 444,000 people.

Donkey’s Place in Camden offers a cheesesteak considered by afficionados to be superior to anything found across the river in Philadelphia. Hobby’s, an “old fashioned Jewish delicatessen” in Newark, pickles its legendary corned beef in fifty-gallon stainless steel vats. Razza, an artisanal pizza joint in Jersey City, has been hailed as the best pizza purveyor in the country. Craft beer? Amble into the new Untied Brewing Company in Providence and order up an Al Morgan’s Stout, named for the city’s mayor.

And you might be surprised at what you can find off the beaten path. Wineries, breweries and distilleries dot New Jersey’s rural landscapes, as do independently run restaurants, farm-to-consumer operations and community farmers markets like the one that’s already expanded since its recent opening behind the municipal building in Howell Township. Harvest Drop in Highstown, southeast of Princeton, supplied New Jersey-grown produce to local eateries until COVID-19 hit the restaurant industry; on a dime it switched to home delivery and now can hardly fill its orders fast enough. Harvest Drop ships out of state to New York, Connecticut and Massachusetts.

Make no mistake, though, food and beverage in New Jersey is big business. Located in the middle of the Boston-New York City-Washington, D.C. corridor, New Jersey provides easy access to one of the most affluent consumer markets in the world, which has helped to propel and food and beverage behemoth that generates $126 billion a year. A distribution center in central New Jersey can serve more than 38 million consumers within 150 miles.

“Location, location, location,” says Bob Unanue, president of Jersey City-based Goya Foods, the largest Hispanic-owned food company in the U.S. “We’re in a strategic spot,” he says, “to be in the food business.”

New Jersey’s transportation infrastructure is a potent complement to the state’s strategic location. The Port of New York and New Jersey is the second-busiest port for imports in North America and the largest on the East Coast, which facilitates robust imports and exports of food products. Wakefern Food Corporation, headquartered in Keasbey, southwest of New York City, is the nation’s largest retailer-owned food distribution cooperative. Wakefern utilizes 2.5 million sq. ft. of warehouse space located within a mile of port docks to allow for one-day shipping to its 190 member stores in New Jersey, New York, Connecticut, Pennsylvania and Delaware.

As New Jersey boasts the nation’s highest concentration of scientists and engineers and is ranked No. 2 in the nation at educating students at all levels, it has developed into a magnet for food and beverage headquarters and R & D operations. Nestlé Health Science, one of the subsidiaries of the Swiss food giant, cited the “commercial and technical competence” of the New Jersey Region’s workforce for its decision to build a $70 million Product Technology Center in Bridgewater. Mondelez, the snack food conglomerate, has not only a significant manufacturing presence in New Jersey, but also its headquarters and R & D Center.

Mars Wrigley Confectionary, in a nod to tradition, is returning to its roots in Newark, where one of its precursor companies made the first M&M’s before World War II. Helped by the lure of a 10-year, $31.5 million tax credit awarded by New Jersey’s Economic Development Authority, Mars Wrigley is to bring 500 jobs to its new U.S. headquarters in the city’s resurgent Ironbound neighborhood. The sweets provider will be the anchor tenant in an $80 million renovated warehouse known as Ironside Newark, whose tenants also include Oren’s Daily Roast, a Manhattan coffee business, and Halal Guys, the fast-casual halal restaurant that also started in New York City.

Mars Wrigley already produces nearly half of the M&M’s it sells in the U.S. at a massive installation in Hackettstown first established in 1958. Spread out over 104 acres, the compound also serves as headquarters of Mars Chocolate North American, which manages an array of candy brands, from Dove Bars to Twix.

Momentum in the Industry

The explosive growth of e-commerce plays to New Jersey’s dominant position in food storage and logistics.

“Demand of cold storage is at an all-time high,” says Chris Pennington, senior vice president and partner for Philadelphia-based Binswanger Commercial Real Estate Services. “Southern New Jersey has proven to be one of the hottest markets in the mid-Atlantic region.”

Binswanger recently brokered the $7.4 million sale of a 190,000-sq.-ft. cold storage warehouse in Pennsauken to Kenover Marketing Corp., which acquired the kosher food business of Newark-based Manischewitz in 2019. The building includes more than 20,000 sq. ft. of cold storage space and 16,000 sq. ft. of office space. Kenover is to operate its subsidiary, Royal Wine, from the Pennsauken site.

Shakti Group USA, a family-owned global importer and distributor of specialty foods, recently doubled its footprint in Hamilton Township with the support of the New Jersey Economic Development Authority’s (NJEDA) Premier Lending Program. Having outgrown its previous space, Shakti Group purchased an 80,000-sq.-ft. warehouse in Hamilton to serve as its national headquarters. Through the Premier Lending Program, the company leveraged financing from a $5.4 million Bank of America loan to support the purchase.