Where International Companies Need to Be 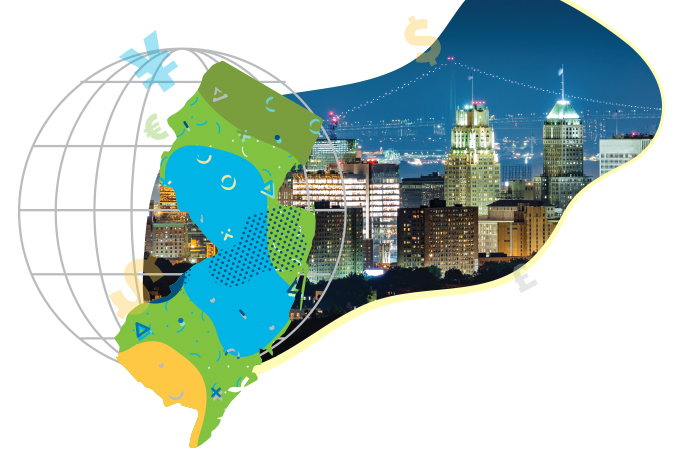 Perhaps the reason New Jersey has so many top-notch ethnic restaurants is because more than 1,100 international employers from around the globe have operations in the state. They employ nearly 285,000 workers, 35% of whom are in manufacturing. Not all of them are from outside the U.S., of course. But many are, and they find in New Jersey not just an abundance of cuisine options, but several even more compelling reasons to have business operations there.

According to the Global Business Alliance, New Jersey has the highest concentration of foreign direct investment (FDI) jobs as a share of private-sector employment in the U.S., at 8.1% in a tie with South Carolina. In the past five years, the state’s FDI employment has grown 25% relative to overall private-sector growth of 8%. New Jersey is home to more than 225,000 scientists and engineers, and it awards the second highest percentage of STEM degrees in the Northeast. It has more than 60 colleges and universities and consistently performs strongly on education measures used in national business climate rankings. It’s in the heart of the Boston-New York-Washington corridor and its more than 56 million residents. The Port of New Yok/New Jersey is the largest on the East Coast, and Newark Liberty International Airport has nonstop flights to more than 130 international cities. That’s a huge advantage to company personnel coming to visit their New Jersey operations.

Where Foreign Investment Comes From

Companies based in France, the United Kingdom and Canada are the largest investors in New Jersey according to the Global Business Alliance, but some other markets are making significant inroads. At an event on April 29 in Trenton marking Israel’s 72nd Independence Day, the New Jersey — Israel Commission noted that trade between New Jersey and Israel notably increased from 2018 to 2019, alongside steady investments from Israel.

Trends in trade data released at the time point to higher exports from New Jersey to Israel and larger amounts of foreign direct investment from Israel moving into New Jersey.

Data from the census for Trade and fDI Markets shows several positive developments from 2018 to 2019:

“Choose New Jersey was proud to lead a business attraction mission to Israel in February which created opportunities for economic growth both in New Jersey and Israel,” noted Jose Lozano, President & CEO of Choose New Jersey. “The new data reflects what we already know — Israel is increasing investment in our State with our shared focus being on innovation-driven industries.”

Meanwhile, Governor Phil Murphy is actively drumming up FDI on business recruitment trips to Europe and elsewhere. One market where he is seeing particular success is India, where in September 2019 the governor announced in Mumbai that three Indian companies plan to expand in New Jersey, adding more than 1,200 jobs. Mumbai-based information technology firm Tata Consultancy Services will expand its workforce by approximately 700 jobs, bringing its New Jersey workforce to roughly 4,700 employees. Larsen & Toubro will add approximately 400 jobs, boosting its Edison workforce to about 1,000 workers. Birlasoft, part of the New Delhi-based conglomerate CK Birla Group, will add an additional 160 jobs. The governor also used to occasion to open a permanent office in India to facilitate investment in New Jersey.