An overview of New Jersey’s connective tissue for commerce. 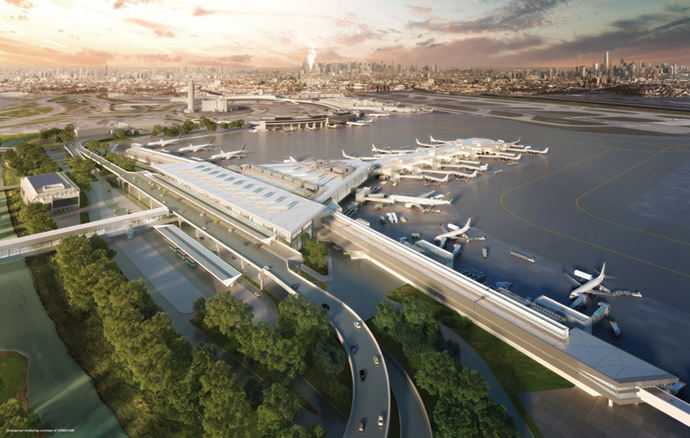 As Memorial Day arrived in May 2020, the International Bridge, Tunnel and Turnpike Association (IBTTA), held a briefing to call attention to the precipitous drop in toll revenues (from 50% to 90%) across the country because of the COVID-19 pandemic. But other things were on the rise, even as staff worked from home and toll collections were suspended.

“Serving our commercial trucking community rose to a new level of importance,” said Diane Gutierrez-Scaccetti, commissioner of the State of New Jersey Department of Transportation. “We stocked supplies of hand sanitizer and made certain food, fuel and restrooms were always open.” At the same time, construction programs proceeded as scheduled. “Some projects have been accelerated,” she said, “to minimize construction-related traffic once the economy returns.” Not to mention maximize the construction productivity that can accompany extremely low traffic counts.

But truck traffic was another thing altogether. I asked her how the DOT was working with truckers.

“We’ve stayed in close contact with the New Jersey Motor Truck Association, who are phenomenal partners,” she said. “A lot of things happen at the federal level, with an increase in allowed vehicle weight and longer hours. It’s been beneficial to them to be able to move more product with fewer folks. We’ve seen no drop-off in commercial traffic. It’s stayed pretty strong.”

The tremendous surge in e-commerce was the primary reason. But you can’t accommodate a surge without having the infrastructure in place.

“The ports were deepened, which allows these Panamax carto ships in,” says Jeff Hale, director of leasing at general contractor and developer The Sudler Companies. “And I think post-Sandy there were quite a few improvements to the turnpike and port access, ahead of this demand crush.”

The $1.3 billion raising of the Bayonne Bridge a few years ago to accommodate those ships helped too. Now a total of 75% of all container carrier services make the Port of NY/NJ their first port of call on the East Coast. From January to April 2019, the Port of New York and New Jersey handled 20,774 more loaded containers, known as 20-foot equivalent units or TEUs, than during the same period the previous year, earning recognition as the nation’s second busiest port.

Making sure infrastructure is ready for calamity, prosperity or both at once is the job of any jurisdiction. In addition to highways, here’s an update on New Jersey’s other modes of movement and assets for conducting business at an optimum level:

“During the third quarter, the seaport recovered to 2019 levels and surpassed its all-time September record as factories and retailers around the world ramped up activity in preparation for the holiday season and growing concerns of future supply chain disruptions,” said the Port Authority. “Also, more global shippers are opting to call on the seaport as their first stops in the U.S. due to the seaport’s improved freight rail facilities and ability to serve ultra-large container ships such as the 15,072-TEU vessel CMA CGM Brazil, which arrived in September as the largest container ship to call at the port.”

Part of the $30 billion gateway initiative to spruce up the five airports operated by the Port Authority of New York and New Jersey is a $2.7 billion investment at Newark Liberty International to build a new Terminal One. Replacing an outmoded Terminal A, opened in 1973, the project will have approximately 1 million sq. ft. of space that will accommodate 33 common-use gates and 13.6 million passengers on three levels, and the terminal will be operated and maintained by Munich Airport International. Now expected to open in late 2021, Terminal One is the state’s largest design-build project, expected to generate more than $4.6 billion in regional economic activity, create more than 23,000 job years and provide more than $1.9 billion in wages.

But there is a lot more to New Jersey aviation. Two of the five airports under the aegis of the Port Authority of New York and New Jersey sit on the New Jersey side: Newark and Teterboro Airport, a general aviation reliever airport located just 12 miles from midtown Manhattan. The official map of the New Jersey Division of Aeronautics features 117 total airports (43 of them public), plus eight balloonports. Among projects underway at these mostly general aviation airports is a $2.8 million expansion of Ocean County Airport at Robert J. Miller Airpark in Berkeley and a terminal expansion at Trenton-Mercer Airport in the state capital region community of Ewing Township (home to a healthy share of corporate employer growth), where Frontier flies more than 16 routes to such cities as Sarasota and Orlando, Florida; Atlanta, Georgia; and Charlotte and Raleigh, North Carolina.

New Jersey has approximately 1,000 miles of rail freight lines from both two Class I and 16 short line regional railroads. Norfolk Southern and CSX are the Class I carriers in the state. Altogether, the state’s 18 freight railroads move over 50 million tons of freight from, to or through the state and displace nearly 3 million heavy truckloads annually.

Though no longer considered a Class I railroad, Conrail — which served the northeastern U.S. as the primary Class I from 1976 to 1999 — maintains nearly 470 miles of track in the state and serves many industrial freight movers’ terminal and switching needs as a service provider to both CSX and Norfolk Southern. As recently as 2016, Conrail served 225 companies in 16 counties within New Jersey, and delivered 300,000 carloads annually to customers within the state.

Some of the most significant rail investment occurs where the land meets the sea. The fourth ExpressRail facility, a $149 million project, at Port Jersey-Port Authority Marine Terminal, completed in 2019, complements the approximately $600 million the Port Authority of New York and New Jersey has invested to build and grow its ExpressRail system since 1991 to support efficient rail movements to and from its major container terminal facilities. The new facility, coupled with the completion of the raising of the Bayonne Bridge to accommodate ultra large container vessels and over $4 billion in other modernization initiatives over the past two decades, has led to unprecedented cargo growth. “Between 2009 and 2018,” said the Port Authority in 2019, “the number of containers handled at the Port of New York and New Jersey grew from more than 2.6 million to almost 4.1 million each year, an increase of 54%.”

“The port has been the lifeblood of the New York-New Jersey regional economy for decades, and completion of this intermodal rail project will only help to bolster our already strong position in attracting international cargo destined for the northeast region and beyond,” said Port Authority Chairman Kevin O’Toole.

New Jersey’s Foreign Trade Zones (FTZs) help companies keep costs in check by deferring the duty on goods until they leave the Zone. New Jersey has five FTZs, including Port Newark/Elizabeth Marine Terminal’s FTZ No. 49. Spanning nearly 4,500 acres, it is one of the largest contiguous foreign trade zones in the U.S.

In the most recent report to Congress of the Foreign-Trade Zones Board of the United States, New Jersey was the No. 15 state in the nation for merchandise receives in FTZs, and No. 16 in exports. By zone, FTZ No. 49 was No. 16 in the country for merchandise received and No. 9 in exports. Among the companies taking advantage of production operations in New Jersey FTZs are Givaudan Fragrances, L’Oreal USA and AFGA Corp.

As the e-commerce trend demonstrates, some of the most powerful commerce moves by fiber. BroadbandNow, which calls itself the Kayak for internet service, says New Jersey ranks No. 1 in the nation for broadband access. “Due to its combination of broad coverage, high speeds and low pricing, New Jersey is the most well-connected state in the U.S.,” says the company. “Over 99% of New Jerseyans have access to a wired connection with speeds of 100 Mbps or faster, and 67% of the state’s population has access to fiber-optic internet services, which is well over double the national average of 25% of Americans with access to fiber.”

The best connected cities? Paterson is No. 1 in the state and No. 2 in the nation, followed by Basking Ridge, Bayonne, Ridgewood and Asbury Park.