New Jersey is riding its flair for innovation into the digital age. 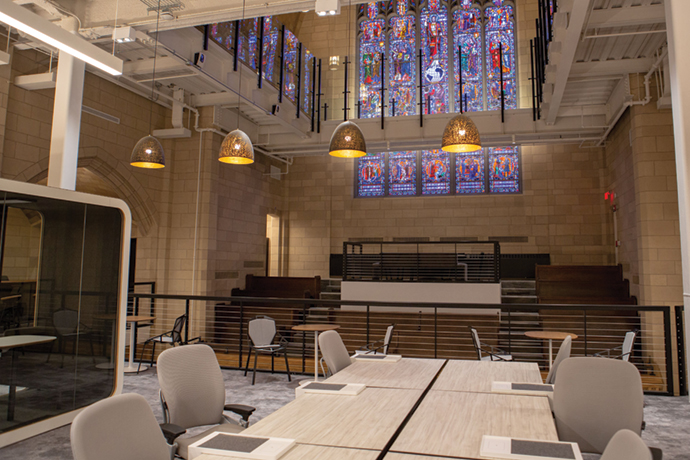 The two largest telecom companies in the U.S. — Verizon and AT&T — both have major facilities in New Jersey. Verizon employs 3,900 people at its 1.4 million-sq.-ft. operations center in Basking Ridge, while AT&T monitors the activity and performance of its infrastructure from its Global Network Operations Center in Bedminster. At AT&T Labs in Middletown, researchers are fostering ground-breaking advances in networking, data mining, cloud computing and video processing.

A leading financial tech cluster, New Jersey is home to four of the world’s top 100 fintech companies — IPC, Cognizant, Indecomm and NICE Actimize. BNY Mellon operates a Global Innovation Center in Jersey City. Cross River Bank, named by Forbes among the Top 50 Most Innovative Fintech Companies of 2019, is expanding to the tune of some 250 employees at its location in Fort Lee.

“We are nothing without our workforce,” says Phillip Goldfelder, Cross River’s senior vice president of public Affairs. “You can have the smartest CEOs and the smartest leadership, but if you don’t find a talented workforce, which we found right here in New Jersey, you’re not going to be successful.”

Audible, the audiobook subsidiary of Amazon, moved its headquarters to Newark in 2007 and has played a pivotal role in the on-going renaissance of New Jersey’s biggest city. Since relocating to Newark, the company’s workforce has grown from 100 employees to more than 1,650, having doubled in the last five years.

“Moving Audible to Newark was one of the best decisions this company has made,” says founder and executive chairman Don Katz. “In addition to our growth, the economic impact and job creation catalyzed by Audible is a call to arms for other companies who are joining us and who should join us here to thrive as we have. Continuing to invest in Newark is as important as anything else we do.”

“Moving Audible to Newark was one of the best decisions this company has made.”
— Don Katz, Founder and Executive Chairman, Audible

In 2015, Katz founded Newark Venture Partners (NVP), a $45 million venture fund accelerator that attracts early-stage companies to become “the next 100 Audibles” in Newark, while promoting the city as a hub of entrepreneurship. NVP has invested in over 65 Newark start-ups, resulting in $250 million in follow-on investment in its portfolio companies, 55% of which have at least one female founder or founder of color. In early 2020, Katz announced the establishment of a follow-on fund, NVP 2, with the goal of raising another $100 million.

In another illustration of the company’s commitment to Newark, Audible renovated the city’s historic Second Presbyterian Church, which had fallen into disrepair, into a workplace for 400 of its employees. Dubbed the Innovation Cathedral, the reimagined space includes game areas, an auditorium, exhibit space, work cafes and lounges.

“This new Innovation Cathedral is testament to the innovative solutions that can empower communities,” said U.S. Senator and former Newark Mayor Cory Booker at the groundbreaking in May 2019.

Meeting the Need for Speed

With COVID-19 forcing work-from-home arrangements everywhere, New Jersey’s position is the nationwide leader in internet access is a hugely important economic differentiator. Broadband Now ranks the state No. 1 in the country for broadband connectivity.

“Due to its combination of broad coverage, high speeds and low pricing, New Jersey is the most well-connected state in the U.S.,” says the internet ranking service. “Over 99% of New Jerseyans have access to a wired connection with speeds of 100 Mbps (Megabits per second) or faster, and 67% of the state’s population has access to fiber-optic internet services, which is well over the national average of 25% of Americans with access to fiber.

“Additionally, affordability data reveals that 78.4% of New Jerseyans have access to a low-priced internet plan ($60/month or less), which is significantly higher than the nationwide average of 51.5% of consumers with access to the same.”

The five New Jersey cities with the best internet service, says Broadband Now, are Paterson, Basking Ridge, Bayonnes, Ridgewood and Asbury Park. Paterson tops the list as tops in the state and second-highest ranking city in the nation.

New Jersey’s superior access to broadband is supported by some 66 data centers, one of the highest concentrations in the country. That robust infrastructure includes 64 colocation facilities, 49 cloud nodes, 22 internet exchanges and 23 disaster recovery and business continuity (DRBC) sites.

The need for speed has boosted Newark’s appeal to tech-heavy users, financial tech companies in particular. More than a decade ago, the city installed more than 25 miles of underground municipal fiber, which has helped give the city one of the top data infrastructures in the country.

Newark can deliver more than 100 gigabits per second from the so-named East Coast Telco Hotel at 165 Halsey Street, the gathering point for as many as 60 data communications companies offering Internet connections throughout northern New Jersey. The building’s tenants and colocation providers include Morgan Stanley, Verizon, CenturyLink, Equinix, Telecom Italia and BT Americas.