How Ohio followed a fundamental plan to build a true macropolitan economy. 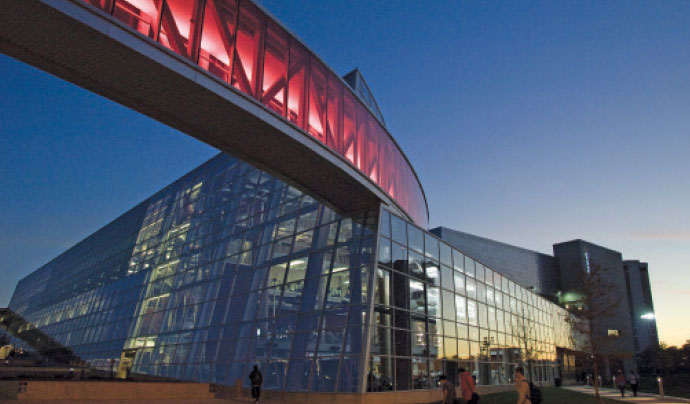 The Ohio State University football team made a name for itself by employing a methodical, run-first offense that became known around the country as “three yards and a cloud of dust.”

The hallmark of the game plan was a relentless ground attack that relied on precise execution, massive physical effort, and mind-boggling player consistency.

Much the same could be said of the modern Ohio economy. Like the best athletes, its range, skills and knowledge can make the spectacular look routine. Such constant excellence can make you forget the dogged determination it takes to move the structural underpinnings of community forward in a direction that positively impacts capital investment, job creation, payroll and standard of living.

“Very few states can offer the comprehensive diversity of opportunities that Ohio does,” says Courtney Dunbar, industrial program leader at Olsson Associates. “The state is a top performer in business climate for both new and mature firms, as well as those that are more physical asset-based and those that are more intellectual property or R&D-oriented.”

Dunbar says other states can take a page from Ohio’s playbook. “If there was one lesson to be learned from the fallout of the automotive industry that affected the ‘Rust Belt,’ it is that the need for industrial and primary economic diversification is absolutely critical to sustained health of a region’s economic system,” she says. “Ohio has done this well, from incentive reforms to accommodate changing and new industrial sectors to the attraction and fostering of subsequent commercial and retail development to enhance quality of place.”

Professor Ned Hill, a leading Midwest economist and current professor of public affairs and city and regional planning at The Ohio State University, says that these reforms bode well for Ohio’s future because they are rooted in market fundamentals. “No amount of advertising is ever going to beat the fundamentals,” he says. “What business leaders want to know is — how much population is nearby and can you reach them? How good is your infrastructure? How much quality and availability are in your workforce? Ohio gets A’s and B’s for this. It is quite good.”

In some states, this positive movement is confined to one or two major metropolitan areas. Think Chicago in Illinois or Atlanta in Georgia.

In Ohio, jobs, industry and the byproducts that go with them are advancing rapidly in every major metro and in many of the smaller cities and rural towns throughout the state.

It is not so much that Ohio’s economy rests on a foundation of isolated, well-performing metropolitan and micropolitan areas. It is, rather, that the entire state moves and acts as one interconnected macropolitan economy.

The list of accomplishments goes on, but suffice to say that Ohio’s steady performance in economic development, across the board, is unparalleled. If it were an offensive game plan in football, it would exhibit the stunning and predictable consistency of the juggernaut OSU teams of the 1950, 1960s and 1970s.

It’s not a stretch to suggest that there’s a connection between the legendary football dynasty and the state’s economic dynasty. Each in its own way reflects the quintessential Midwestern characteristics of work ethic, humility and consistency.

“There is no single silver bullet that explains Ohio’s success,” he says. “Ohio is a consistent top performer and that is because first and foremost, Ohio has taken economic development seriously for a long period of time. Second, with changes taking place in the global economy, the state offers very reasonably priced and compelling places to invest.”

Hill points to the new Automotive Alley that has sprung up along the Interstate 75 Corridor. Whirlpool Corp. is dramatically increasing its capital investment in Ohio, and a plethora of new knowledge industries are cropping up in the capital region around Columbus.

“This decade is marked with the new economic geography of North America,” says Hill. “It has benefited Ohio. It has shifted its focus to workforce, and JobsOhio has been very aggressive in making workforce a central part of its attraction strategy.”

John Minor, president and chief investment officer of JobsOhio, says that Ohio acts as one interconnected macropolitan economy because of three factors: 1) market access and logistical advantages throughout the state; 2) leading-edge assets and institutions such as The Ohio State University, Case Western Reserve, Wright-Patterson Air Force Base, NASA Glenn Research Center, OAR Net and Cleveland Clinic; and 3) “our strong foundations in sectors such as automotive, research, advanced manufacturing, energy and consumer products.”

Ohio Plays to its Strengths

Hill says that the Buckeye State gained serious momentum when it began to focus its statewide and regional efforts on Ohio’s inherent strengths. “We are now beginning to see some big wins,” he says. “Amazon is expanding in Central Ohio. You are seeing more data center investment in Ohio. The regional spot market in natural gas is favoring Ohio too.”

Minor also points out that JobsOhio only invests in projects that pass muster. “We approach each project as an investment that we make in an Ohio business,” he says. “Given the attractive qualities of this state, we are ‘all-in’ on Ohio’s economic future.”

Prominent site selection consultants say that they too are buying into what Ohio is selling. “I believe the current business climate in Ohio is positive and they are offering very competitive incentives for those companies that relocate or remain in the state,” says Jim Winter, director of industrial services for Cresa.

More than fifty years ago, The Ohio State University built a national football powerhouse by beating everyone else at the fundamentals of the game.

A half-century later, the state it serves is doing the same.