Where to Find Venture Capital in the Midwest. Startup Ohio 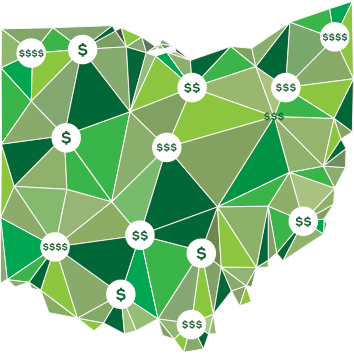 The Midwest may not spring to mind as the magnet for venture capital relative to Silicon Valley, Austin and the other VC heavyweight locations. But keep an eye on Ohio. It was ranked 9th nationally for access to capital in CNBC’s recent Top States for Business, ahead of Washington, Massachusetts and Virginia — all states with formidable IT and innovation clusters.

So, how did Ohio develop such a strong ecosystem for growing companies? The short answer: Ohio has built a successful continuum of support. On the early part of the continuum is the state-run Ohio Third Frontier, which has deployed well over $1 billion in support of technology-based economic development since 2002. A portion of Ohio Third Frontier funds are used to support a network of seed-stage investors across the state including CincyTech in Cincinnati, Rev1 Ventures in Columbus and Jumpstart in Cleveland.

As companies progress through the continuum, they find support from JobsOhio’s industry experts. Companies that are incubated and accelerated by the Ohio Third Frontier investment network can eventually move up to the JobsOhio growth financing program once those companies have demonstrated a proven business model, alongside other growth factors.

Overall, the continuum has unleashed a new wave of startups and job creation potential that is reshaping Ohio’s business landscape.

Look at the recent growth Assurex Health has experienced. The company started as a two-person spinout startup, then received support from Ohio Third Frontier and later from JobsOhio to boost its growth. Now Assurex Health employs 450 people and was acquired in a deal worth up to $410 million.

“We are supporting the problem-solvers and businesses that are building a new Ohio,” says David Goodman, director of the Ohio Development Services Agency and chair of the Ohio Third Frontier Commission. “Our investments are the foundation, creating new opportunities for Ohio technology companies with the potential to save lives and change the way we work and live.”

The cultivation of entrepreneurship extends throughout the state. The Youngstown Business Incubator (YBI) is a key builder of technology-based economic development in a 21-county region of Northeast Ohio. More than just a new business incubator, YBI offers services such as marketing, portfolio-company recruiting and resource acquisition.

Mark Kvamme from Silicon Valley founded Drive Capital in Columbus with partners Andy Jenks, another Silicon Valley transplant, and Chris Olsen. Drive Capital is a prominent illustration of the strengthened venture capital industry in Ohio. “Silicon Valley will always be a major center of innovation,” wrote Kvamme in a November 2014 Drive Capital blog, “but the advancements in technology it has pioneered have allowed the Midwest to emerge as a significant player in building the rapidly growing technology companies of tomorrow.” The firm currently is an investor in 13 such companies.

“The story we hear all the time from people coming in is that they didn’t realize that there was as much entrepreneurial activity here as there is,” says Mark Barbash, senior strategic advisor to the Council of Development Financing Agencies in Columbus. “We’re not known for it. But because these infrastructure components are getting built out in the regions, coupled with the work JobsOhio and the venture capital community is doing you don’t have to search for access to capital any more. There’s someone to call and help you.”

More than a mere startup funding source for tech ventures, Ohio Third Frontier offers a suite of resources. Besides a Technology Validation and Start-up Fund, a Commercial Acceleration and Loan Fund and other sources of capital, it administers the Ohio Tech Internship, with more than 300 students registered as of February 2016, and TechOhio, Ohio Third Frontier’s primary web- and social media-based communications channel.

Since 2006, Ohio Third Frontier supported-organizations have provided services to more than 1,400 companies, of those 315 received an investment of $100,000 or more. Those 315 companies have gone on to create 2,584 new jobs, attract $1.5 billion in third-party private investment, and generate $1.2 billion in product sales.

Ohio Third Frontier funds these technology entrepreneurs, startup and early stage companies throughout their stages of development. It connects them with a statewide network that provides access to business expertise, mentorship, export, capital and talent to help turn great ideas into growing companies and jobs.

“Bottom line, Ohio is a great incubator for entrepreneurs — and they see the advantage,” says Goodman. “Ohio beat its own record of new business startups six years in a row, with more than 97,000 new businesses in 2015.”

The big news is that this translates into jobs. Ohio is one of the top 10 job creating states in the country, through success attracting new and growing businesses to the state. Since 2011, Ohio added over 428,000 private sector jobs.

R&D grant decisions are based on a number of project factors, including but not limited to alignment with JobsOhio sector strategies, job creation, new payroll, and fixed-asset investment commitments and project location.

An R&D grant may provide funding for a portion of the costs related to a new center over 5 years. The R&D Grant program will have an initial total funding authorization of $50 million.

To the extent that new production facilities result from commercialized products and services from a new Ohio R&D center, JobsOhio will require (prior to a Grant recipient’s investment decision) notification of such planned facilities and the opportunity to present site alternatives to the Grant recipient.

Eligible Applicants
Applicants can include any for-profit company or non-profit institute with a minimum of 5 years operating history and annual revenue of greater than $10 million. The credit rating of each Applicant will be considered, along with other customary due diligence items.

Eligible Projects
To be eligible to receive an R&D Grant, a center must represent at least $3 million in new cash investment by a for-profit company or non-profit institute.

Eligible Costs
Funds can be used for Qualified Research Expenses (QRE) and satisfy operational, equipment or facility needs related to:

Term
The term of grant agreements will be up to five (5) years. Each year, the grant recipient is required to submit a status report detailing the overall progress of the project (including milestones, actual vs. budget) and the measurable economic impacts on Ohio.

Disbursement of Funds
JobsOhio funds will be disbursed on a reimbursement basis, first with respect to fixed assets and second, with respect to non-fixed assets, in each case with supporting documentation required with respect to dollars invested. All awards under the R&D grant are subject to approval by the Chief Investment Officer (CIO).