Aviation and aerospace have been a signature Ohio industry since the early 1900s. 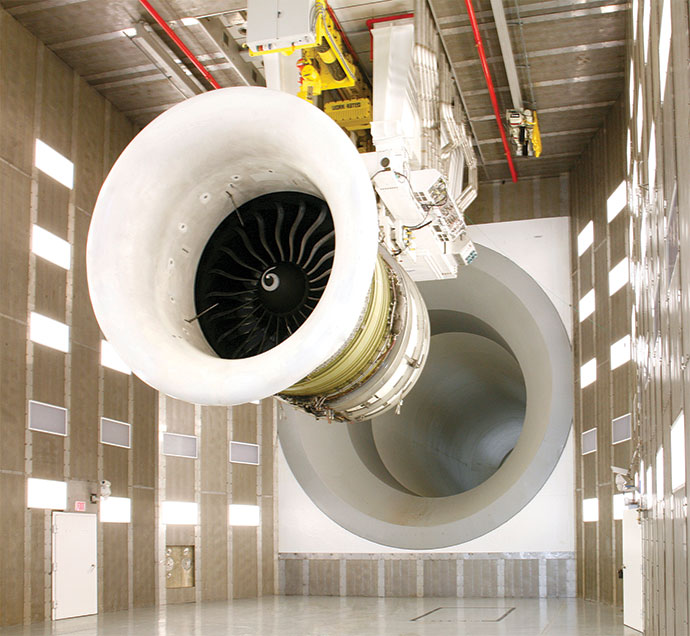 Jet engine in Peebles, Ohio, goes through a series of real-world tests.
Photo courtesy of GE
by MARK AREND

Aerospace is hardly an emerging industry in Ohio, but it wasn’t always the state’s fifth-largest. The Wright brothers designed and built their “Flying Machine” in Dayton nearly 120 years ago, when the aerospace sector didn’t yet have a proper name. Today, the private aerospace and defense sector supports 41,200 jobs at nearly 600 establishments, with notable clusters in Dayton and Cincinnati, Cleveland, Columbus and Akron, and an economic impact north of $8 billion.

From motion control and hydraulics to propellers and landing systems to specialized materials (aluminums, castings and composites), high-end commercial aircraft engines and components, if it’s part of a flying machine today, it was likely made in Ohio. UTC Aerospace, GE Aviation, Lockheed Martin, Honeywell, Sierra Nevada Corporation, Eaton and Northrop Grumman all have sizable operations in Ohio, as do their many Tier 1 and Tier 2 suppliers.

Each year, Ohio’s colleges and universities graduate more than 10,000 engineers and engineering technicians into the workforce. Equipped with extensive, state-of-the-art aerospace and aviation knowledge, these graduates are prepared to perform.

If manned flight astonished the Wright brothers’ contemporaries in the early 20th century, imagine what they would have thought seeing a drone or unmanned aerial vehicle whiz by overhead. Today drones are commonplace in agriculture, energy, real estate and other industries, and Ohio is a leading center of UAS (unmanned aerial systems) research and development. In 2013, the Ohio/Indiana UAS Center was established in Springfield, Ohio, to advance commercialization and support flight operations for government and agencies. The Association of Unmanned Vehicles Systems International estimates the UAS market in Ohio is projected to be a $2 billion industry with a potential to create 2,500 jobs over the next 10 years.

In 2015, the Federal Aviation Administration (FAA) approved the UAS Center’s request for an exemption under the FAA Modernization and Reform Act of 2012, allowing it to use unmanned aircraft systems in its national airspace system. The UAS Center uses UAS to conduct precision agriculture; education, environmental, wildlife, and forestry monitoring; infrastructure inspection; survey and mapping; and research and development.

Some of the largest commercial aircraft engines in development are tested in Ohio.

Also in 2015, the UAS Center teamed up with the University of Cincinnati to conduct research and development on systems necessary to execute precision flight control algorithms for small UAS. Outcomes from this research are targeted to help emergency responders but may also be leveraged for other industrial purposes.

Most recently, $5 million in state and federal grants is being used to conduct research that would allow drones to be flown beyond the line of sight. Currently, the FAA requires drone operators to fly within their line of sight in order to avoid collisions. New technologies using radar out of the Springfield-Backley Municipal Airport in the Miami Valley could potentially allow the military and businesses to fly delivery drones several miles from a distribution point.

Back on the ground, some of the largest commercial aircraft engines in development are tested in Ohio. In May 2017, GE Aviation began GE9X engine certification tests at its Peebles Test Operation (PTO) facility east of Cincinnati, which will power Boeing’s new 777X aircraft. As the second GE9X engine begins testing at PTO, assembly of the third and fourth GE9X engines is well underway at GE Aviation’s headquarters in Evendale, Ohio.