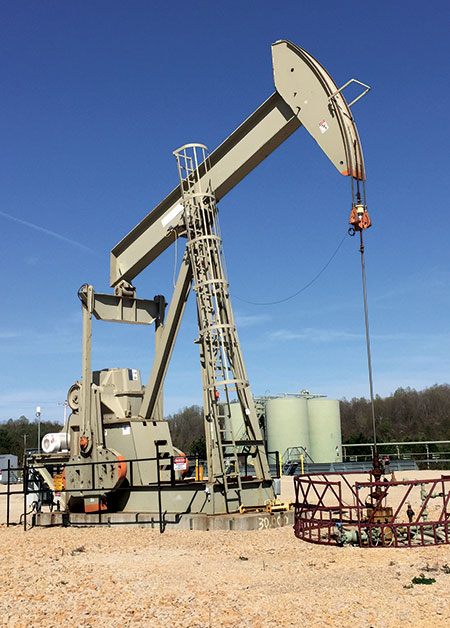 Natural gas drilling operations are a common sight in Appalachian Ohio thanks to the largest shale gas deposit in North America.
Photos courtesy of APEG

From the country’s largest natural gas deposit to a host of downstream industries, energy fuels an Ohio economic resurgence.

Ohio saw $1.145 billion in capital investment in 2016 from the shale energy and petrochemical sectors, industries that created 343 new jobs and retained another 450 jobs last year.

“With its large quantities of affordable natural gas and deregulated utilities, Ohio provides just the right environment to invest in a gas-fired plant,” said Bill Siderwicz, president of Clean Energy Future LLC, which is building a 940-megawatt combined-cycle, gas-fired power plant in Lordstown near Youngstown in Eastern Ohio. The $890-million investment will generate enough power to supply about 750,000 homes.

Everywhere one turns in Ohio, energy is fueling an economic resurgence — particularly in the manufacturing sector — as shale and petrochemicals account for

15.1 percent of Ohio’s $215-billion gross state product. In fact, Ohio has so many energy resources

that the state is a net exporter, meaning that Ohio produces more energy than it consumes.

Interstate Chemical Company, which makes, stores and distributes industrial and specialty chemicals, is building a new plant near Toledo to leverage the state’s abundant supply of natural gas.

“We were really impressed with the way everything came together,” said Lou Razzano, executive vice president of Interstate Chemical. “This was a complex project with challenging infrastructure demands. The City of Oregon, the Regional Growth Partnership, JobsOhio and the Ohio Environmental Protection Agency all worked so well together to find and develop a site that will get us up and running as quickly as possible.”

The $50-million investment is expected to create 40 full-time positions when fully operational.

The permitting process and tax climate in Ohio go a long way toward ensuring that investments like these move forward. JobsOhio, for example, works closely with the Ohio EPA on projects of this nature. If a project is to be permitted, OEPA is required to issue a permit within 180 days of receipt of a completed application, and OEPA staff is dedicated to working with companies along the way to ensure that the data and applications are accurate, which promotes efficient permitting.

A Shale Revolution Is Underway

From natural gas to natural gas liquids like ethane and butane, Ohio is an abundant source of energy for manufacturing companies and other industrial end-users. 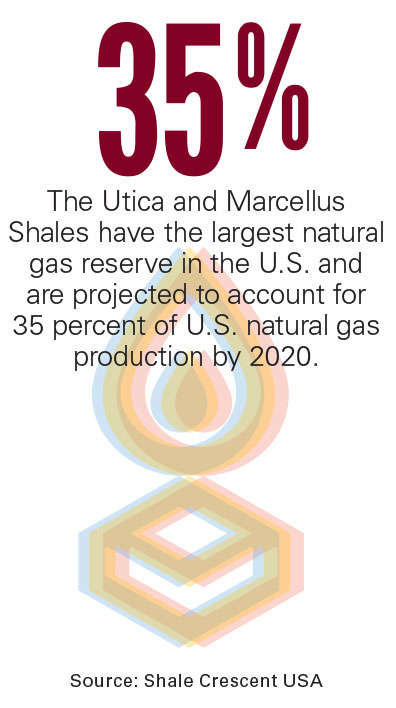 “The Mid-Ohio Valley has the cheapest, most abundant natural gas in the industrialized world,” said Greg Kozera, the marketing director for Shale Crescent USA, a regional coalition of business and community leaders who are promoting the attractiveness of the Mid-Ohio Valley because of the presence of the Marcellus and Utica Shales.

“Shale Crescent USA has been around for two years, but folks around the world are starting to notice us,” says Kozera, an engineer and environmentalist with more than 35 years of experience in the natural gas and oil industry. “If you took northern West Virginia, eastern Ohio and western Pennsylvania and put them together, that region would be the number three producer of natural gas in the world. In fact, that region is a big reason why the U.S. is now the leading natural gas producer in the world.”

Shale Crescent USA is a non-profit, non-political group of business and community leaders from Ohio and West Virginia that is working to bring business back to the region. The shale revolution is the ticket to do just that, says Kozera.

“You have an area with the largest natural gas field in the world,” he says. “There is easy transportation on the Ohio River and you have people eager to work. Being close to half of the markets in North America also helps. We could be on the verge of a petrochemical industry boom, and the average job in that industry pays $100,000.”

The numbers alone in the Shale Crescent region of Appalachian Ohio and West Virginia tell a compelling story:

“Most people have no idea that we have that much natural gas here,” says Kozera. “There is no such thing as scarcity of supply anymore. Pipelines are being built to take this gas to the Gulf Coast and Detroit and the Northeast. Our goal is to capture more of this raw feedstock in the region and bring a lot of those petrochemical plants right here.”

PTT Global Chemical of Thailand is evaluating a site in Belmont County in Eastern Ohio to establish a $6-billion ethane cracker, and more such plants are considering the region, notes Kozera.

With an abundant supply of cheap gas, an experienced manufacturing workforce and multiple transportation options by highway, rail, air and water, the Shale Crescent makes sense for a wide variety of plants, adds Kozera.

The Ohio River provides 981 miles of navigable waterway and gives shippers access to the Gulf of Mexico. Plus, the Shale Crescent has more than 23 barge ports and two public barge dock facilities with potential for more.

By being home to critical chemical feedstocks, Ohio’s petrochemical industry is seeing tremendous activity in expansions and new locations.

“The only place that competes with us is the Gulf Coast. They have more infrastructure than we do, but we have the Ohio River,” Kozera notes. “We are near half of the major markets in the U.S. and Canada. By truck, you can be to over 50 percent of the markets in the U.S. and Canada within a day. With these assets already in place, we believe that we can bring manufacturing back to the Ohio Valley.”

The area is also able to export product through the St. Lawrence Seaway, down the Mississippi River to the Gulf of Mexico and by rail to eastern and western seaports.

He adds that the region offers access via Interstates 70, 71 and 75; and the region is served by two Class 1 railroads — CSX and Norfolk Southern, along with several short-line railroads. This allows for connectivity to East Coast and West Coast ports via rail.