The communities in northeast Oklahoma work and play well together. 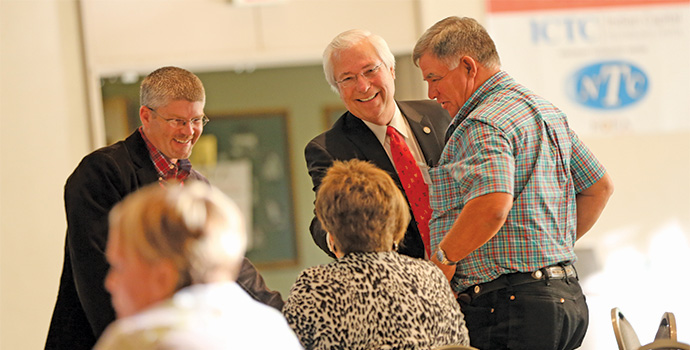 The late super sales trainer Zig Ziglar used to say, "You can have everything in life you want if you will just help enough other people get what they want."

Folks in northeast Oklahoma have certainly found that to be true. Had it not been for cooperation on the part of many state and local economic development entities, a $170-million distribution center would have located somewhere other than northeast Oklahoma.

Instead leaders from the Tulsa Regional Chamber, the City of Owasso, Tulsa County, the Cherokee Nation, Indian Nations Council of Governments (INCOG), Tulsa Technology Center and the State of Oklahoma stood shoulder to shoulder, crafting an incentives package worth close to $21 million to help land a 1.3-million-sq.-ft. direct-to-consumer fulfillment center from Macy's. The project brings 1,500 jobs to Owasso, just north of Tulsa, and is the largest jobs creation project in Oklahoma in over a decade.

"This project would not have happened were it not for a regional effort," says Justin McLaughlin, senior vice president for economic development at the Tulsa Regional Chamber. "The site is actually located in Tulsa County and not within a city boundary. This made it more critical for the adjacent municipalities to work in conjunction to land this project. Since we were promoting the region's assets, workforce was a large reason Macy's chose the Tulsa County site."

In fact, the Owasso site was selected from 150 other locations in four states. The investment is expected to have an annual $80-million economic impact.

The Macy's project is the biggest example of regional collaboration helped along by a joint initiative called Tulsa's Future.

"In the past, other programs have centered mainly around marketing the region," says McLaughlin. "Tulsa's Future is a regional economic development program that not only markets the region to prospective companies, but works in the areas of legislative advocacy and economic development. With over 28 communities and tribes invested, this allows us to present a unified approach to recruiting and retaining companies to the region."

The Chamber-led initiative pulls together public- and private-sector investors with a goal to generate 15,000 high-wage jobs between 2011 and 2015 and to generate $1 billion in capital investment Thus far, close to 18,000 jobs have been announced, with over half of the jobs meeting or surpassing the plan's target salary of $50,000 or greater. In 2013, the Chamber assisted close to 80 expansions and led efforts resulting in significant job announcements, including Verizon's financial services hub bringing 500 new jobs.

Regional collaboration is essential, says Anna Knight, board secretary of the Northeast Oklahoma Regional Alliance (NORA). "Particularly in a rural area," she adds. "We really reach out and try to work with and embrace the Tulsa area and the northwest Arkansas area. As they grow, we grow. We're a byproduct of their growth. We need to stand up and take care of ourselves, but we also have to realize that we're interdependent with the metropolitan areas as well."

NORA was founded several years ago when three counties worked together to apply for an Empowerment Zone grant. The collaboration went so well the group expanded to include seven counties and then 14.

"In the beginning it was a lot of information sharing," says Knight. "For instance, the city of Sallisaw was looking at building a new jail and the city of Stillwell had just finished one. They were able to share plans and resources. It made sense to include more organizations, especially being a rural area. We were already incorporating the labor force from surrounding communities when we responded to requests for proposals."

This year the organization is focusing on three objectives: education, leadership and rural healthcare.

" We realized we were responsible for moving our region forward."

In the critical area of health care, NORA is focusing attention on acquiring better emergency medical services, gaining easier access to healthcare and expanding specialty services. "Part of the reason we're focusing on health care is because the health of the workforce affects the ability of workers to meet the needs of the growing businesses in our communities," says Knight. Currently, a systemic assessment is being taken to determine regional priorities and a road map to obtaining them.

NORA also hosts an annual summit attracting close to 300 community leaders from across the region. The NORA Summit, now in its sixth year, is action oriented. "We realized we were responsible for moving our region forward and that industrial recruitment wasn't necessarily a sustainable strategy for the area," says Knight. "We pulled regional action teams together that take specific topics in order to develop infrastructure around those topics."

NORA partners are seeing results from their collaboration. Rural electrical cooperatives have started offering fiber to homes and businesses in the area. "We can't take credit for that," says Knight, "But the partnership and bringing everyone together, talking about the importance of broadband in the community, spurred these companies along."