How the Oklahoma business climate attracts industry and improves incomes. 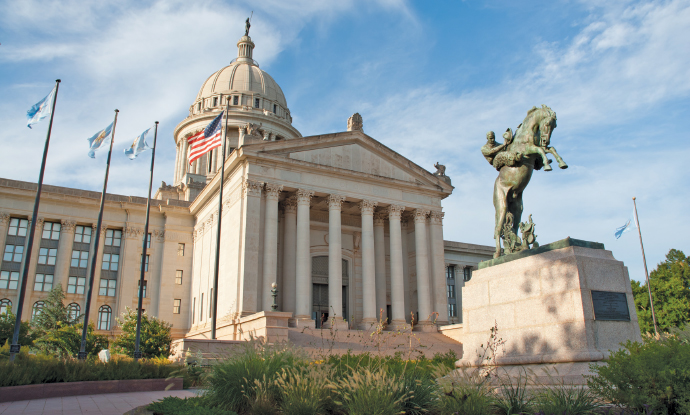 Photo of the state capitol by VideoLens.tv
by RON STARNER

When Boeing announced last fall that it would move up to 900 defense and support-related jobs to Oklahoma City, it only confirmed what many economic experts were already saying about Oklahoma: the state is on a huge roll, and that momentum is poised to accelerate through 2015.

The shift of jobs by the giant aerospace company to Oklahoma makes sound economic sense for Boeing, says Roy Williams, president and CEO of the Greater Oklahoma City Chamber. “Boeing sees a significant savings by operating here and also has seen a lot of synergy by consolidating a lot of their operations to one location,” he said. “They have to continue to drive down costs to be competitive, and Oklahoma City has been a really good economic productivity decision for them.”

An improving business climate and low costs are coalescing to drive more companies to Oklahoma. CNBC ranked Oklahoma No. 1 in the nation in its annual Lowest Cost of Doing Business survey in 2014. The state was also ranked third best in Lowest Cost of Living in the nation.

Boeing and other employers know they can save substantial sums by locating operations in Oklahoma. D&L Oil Tools celebrated the opening of its new 62,000-sq.-ft. Tulsa headquarters in October. D&L now employs 350 people in the state.

Standard & Poor’s says this growth momentum will accelerate this year. According to a report by the ratings agency, Oklahoma is poised to be one of the four fastest-growing states in the nation in 2015. S&P predicts that Oklahoma’s economic output will grow by more than 3.5 percent this year.

“This report from Standard & Poor’s is another indication that Oklahoma’s economy is back on track and our families and businesses are doing better,” said Gov. Mary Fallin. “Since 2011, we’ve created over 102,000 jobs, seen median household income grow at twice the national average, and replenished the Rainy Day Fund from just over two dollars to over $530 million.”

In 2014, Oklahoma welcomed 120 business expansion announcements totaling over $4 billion in new capital investment, resulting in over 12,600 new jobs for the state.

With endorsements and top rankings coming in from Forbes, CNBC, the Tax Foundation and the Movoto Real Estate Blog, the Oklahoma business climate has never been better.