Aerial artists in Oklahoma are researching, developing and building the UAVs that are shaping our future way of life. 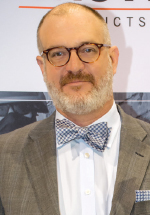 In the 1996 disaster film “Twister,” scientists release probes into a tornado in an attempt to study the movements of a powerful storm and predict its path.

It was considered science fiction at the time.

Using high-tech unmanned aerial vehicles (UAV) that can fly directly into the worst storms and transmit data back to meteorological researchers, the UAS sector offers the promise of averted tragedies and saved lives.

“I like to tell people that this industry right now is like sitting in the ocean waiting to catch a really big wave and riding it all the way to shore,” says Ben Kimbro, executive vice president of Tactical Electronics, a UAS manufacturing and R&D company in Broken Arrow. “UAS is a burgeoning science and industry in Oklahoma. This is one of the best places to monitor tornadoes and severe thunderstorms. Right now, researchers can only predict a storm’s path about ten minutes in advance. With the advent of drone technology and remote monitoring, researchers may be able to push that severe storm warning out to an hour in advance. That adds up to additional lives saved.”

In Oklahoma, UAS technology is being harnessed to aid first responders in search-and-rescue operations and disaster recovery efforts, study short-term and long-term weather patterns, monitor crop growth and harvesting, assist firefighters in the battle against raging wildfires, and develop payloads on drones for all types of applications.

Some 18 aerospace companies are actively engaged in unmanned aerial systems activity across the state. Collectively, these firms employ over 2,000 workers, many of them engaged in research and development at key installations around the state. These include: 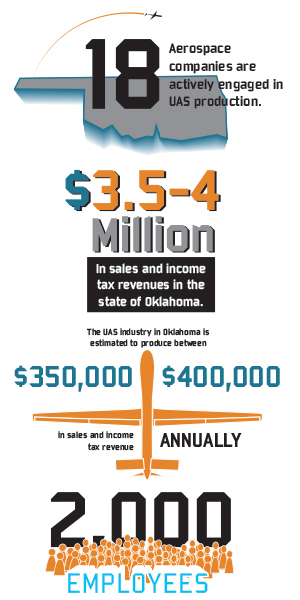 Oklahoma is home to the only UAS testing and training facility in the US dedicated solely to the UAS marketplace. The state also has the first university graduate degree program in unmanned aerial vehicles at Oklahoma State University in Stillwater and is a unique place in the US offering restricted airspace for UAS testing.

In June 2012, Oklahoma was selected by the US Department of Homeland Security as a test site for its new program — Robotic Aircraft for Public Safety — a program to test and evaluate smaller UAS for use by first responders across the country. DHS officials are currently evaluating about 50 companies’ small UAS platforms and technologies in Oklahoma.

“Oklahoma has historically had a really rich aviation industry and a lot of ties to aerospace,” says Kimbro, whose company has developed small UAVs for a variety of research applications. “Our landscape has a lot of wide-open space. We have always been a flying and aerospace-focused state. We have jobs in this industry scattered all over the state. As technology progresses, Oklahoma is a natural fit for the next evolution of the industry.”

“Academia, business and government all play together very nicely in Oklahoma,” Kimbro says. “That doesn’t happen everywhere. In Oklahoma, that spirit of collaboration is very sincere and it is supported by our policy makers, our colleges and universities, and our technical and trade schools. We support one another and that gives us a competitive advantage.”

He notes that “Tinker Air Force Base is another huge factor. We have the maintenance contracts for the Global Hawk and Predator. Many of the sub-systems that support this work are scattered across the state, from Oklahoma State University to the University of Oklahoma and many specialized centers.”

Dr. Stephen McKeever — secretary of science and technology for the State of Oklahoma, director of the National Energy Solutions Institute, and Regents Professor of Physics at OSU — says that he worked with Gov. Mary Fallin to put together a strategic plan for UAS in Oklahoma in 2012. “We have been following that plan ever since,” he says. “We put in place the research component that is bearing fruit today across the state. We have decided to focus our research in Oklahoma on aerospace and defense, homeland security, severe weather, agriculture, oil and gas, and first responders.”

Up Next:
More Research Parks

The next step for the state is to develop the research parks “in which industry can grow in collaboration with the expertise at the universities,” McKeever says. “We will also work with our political supporters at the state and federal level to get the necessary legislation in place to allow this industry to thrive.”

Oklahoma is competing against Alaska, Ohio, Virginia, Texas, North Dakota and Nevada to claim a leadership position in the highly competitive UAS arena, but Oklahoma is the only state that offers the comprehensive education and training at every level of expertise in all aspects of the emerging UAS industry, says McKeever. “We are literally competing with places like MIT, Stanford, Berkeley, Mississippi State, Embry-Riddle and a few others, but no one else offers all of the resources that OSU does right here in Oklahoma.”

McKeever adds that “Oklahoma is in this industry for the long haul. It is a really dynamic area and it is highly competitive. We are very committed to this sector, and we are the only state that offers a truly comprehensive approach to the UAS industry.”

James Grimsley, president and CEO of Design Intelligence Inc., a defense contractor engaged in UAS work in Norman, says that “we are now at the starting line of seeing UAS technology enter the commercial world. There is a huge growth opportunity here, and we plan to capitalize on it.”

Between 2015 and 2025, the UAS marketplace will support about $90 billion worth of work. Once the Federal Aviation Administration adopts formal rules for the application of UAVs, Grimsley says that the sky’s the limit for this sector.

“Facebook has already invested $100 million or more into UAS, and Titan was just bought by Google for $10 million,” he says. “Amazon is very serious about deploying UAS technology. They have a very active R&D unit right now. We are in a globally competitive environment.”

Grimsley says his firm will announce a new solar-powered UAV in May. “This will be a significant development step for us, but it won’t be our last,” he says. “Stay tuned for more.”

For the rapidly growing UAS sector in Oklahoma, that seems to be the mantra for all. 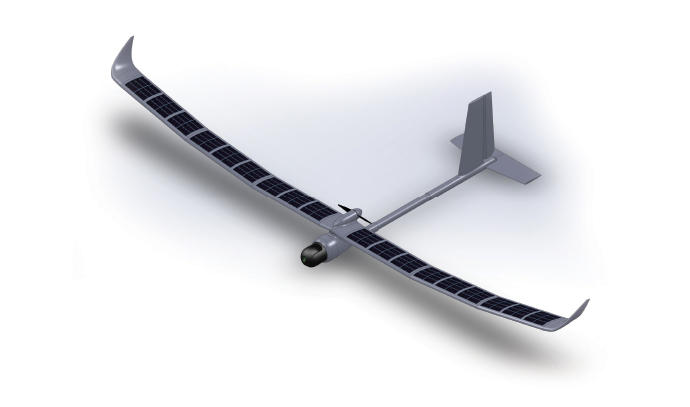