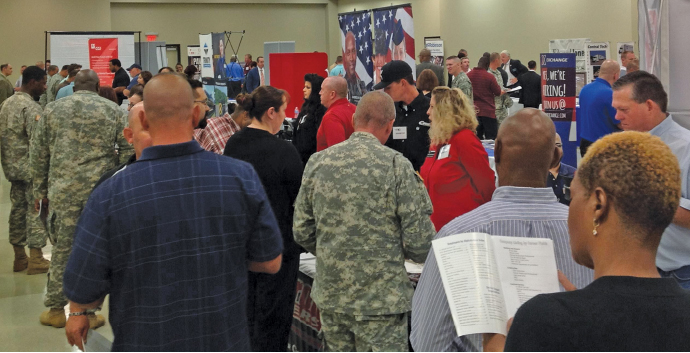 US Veterans have a strong support system in Oklahoma. The good news emanating from Oklahoma is due to a unique hiring program for military members transitioning into civilian life and looking for jobs.

The governor asked the four partners to “develop a program to assist veterans in finding employment in our state,” says Colonel Warren Griffis, director of the Employment Coordination Program of the Oklahoma National Guard. “She looked for agencies that already had departments with outreach programs for veterans.” The goal was two-fold: keeping veterans in the state and helping employers in Oklahoma fill job openings.

The first OK Military Connection hiring event was held the next year. “We created a website and developed the concept of hiring events. We invited employers who want to hire veterans in Oklahoma,” says Griffis. He emphasizes that this is not a job fair. Employers must come to the event with available jobs and be willing to interview veterans.

According to Amy Ewing-Holmstrom, military transition coordinator, CareerTech for Vets, the goal is to have Oklahoma employers hire the veterans to keep them in Oklahoma. She notes, however, that she’s heard from employers from as far away as Nebraska who want to attend Oklahoma’s unique hiring events. “This is a state initiative, though,” she says. “We don’t want companies from out of state.”

Nor do they need employers from out of state. There are plenty of jobs for welders, diesel mechanics or truck drivers, and many jobs are available right now with the police, highway patrol and fire departments. The main goal is to match the skill set the veteran brings from his or her military experience to a particular job. “We target specific employers,” she says. “We don’t want hourly wage jobs, but stable and secure employment.”

The matchmaking between veteran and employer actually occurs prior to each of the hiring events, which are held about three times a year, in various regions of the state, according to David Crow, communications specialist, Oklahoma Department of Commerce. Veterans are encouraged to pre-register and complete a worksheet before the hiring event. At the event, space is provided for employers to interview potential employees, and computers are set up for the veterans and their families to learn about support services offered.

In 2012, 37 individuals were hired as a direct result of the event, with an average annual salary of $40,000 — meaning an infusion of about $1.5 million into Oklahoma’s economy. Moreover, according to Ewing-Holmstrom, the fact that those 37 individuals will have jobs means that the state could save an average of $10,672.80 per person per year on unemployment benefits, or about $394,893.60.

At the June 6, 2013, hiring event at Fort Sill, 334 individuals participated along with 61 employers, resulting in 26 interviews on-site and 150 interviews following the event, for a total of 176 interviews. Sixty-three individuals received job offers at an average salary of $40,000 a year, and an infusion of $2.4 million into the state’s economy.

According to Crow, Oklahoma has many soldiers returning from Iraq and Afghanistan who need to find employment. OK Military Connection reaches out to those soldiers through representatives on the military base and through local media.

“We can’t force people to take jobs or force employers to hire, but we can create opportunities. So far, this has been a very successful program,” Crow says. “We hope to have as many events as possible, covering all parts of the state.”