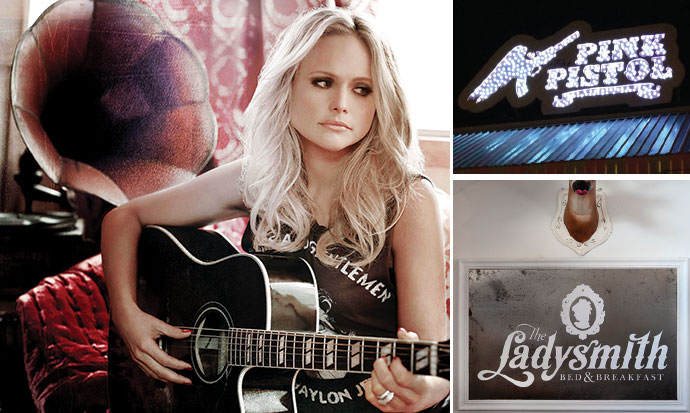 In Tishomingo, a boutique shines with the bling and style that defines country music star and adopted Oklahoman Miranda Lambert.

With sparkling goodies and one-of-a-kind items, the Pink Pistol has brought a glittery new feel to the Oklahoma town.

“This is just the coolest place ever,” says Staci Addison, manager of Pink Pistol. “It’s probably the most eclectic, unique gathering of all things fun.”

Lambert opened the Pink Pistol in 2012, spurring the rebirth of Tishomingo’s Main Street. In 2014, she unveiled the partner bed and breakfast, The Ladysmith.

On the heels of Pink Pistol’s success, Lambert opened The Ladysmith, a B&B named as Best New Hotel in the South for 2015 by Southern Living magazine.

“I’m a project person and love creating things, whether it’s a song, a stage look or a store. It’s all inspiring to me,” says Lambert. “I opened the Pink Pistol first and when people came to visit the store, they kept asking, ‘Where can we stay around here?’”

Lambert bought the building across the street and created The Ladysmith.

“When she walked through this old building, she envisioned what it might become,” Addison says. “She kept a lot of the original features so the place keeps that old-world feel.”

The Ladysmith includes a grand ballroom that is used for events. Bands play to an all-ages crowd, and sometimes, Miranda Lambert and Blake Shelton pop in for an impromptu concert.

“The Pink Pistol created hope for the entire town,” says Addison. “The store absolutely infused the town with so much pride in Miranda, but also pride in the community.”

In a community where the mayor owns the local gas station and delivers the pizza himself, the celebrity of Lambert and husband Blake Shelton are welcomed.

“My husband is from Ada, and he wanted to be close to his hometown,” Lambert says. “We live in Tishomingo and love the small town feel. In a big city, it would just be another store or bed and breakfast. In Tishomingo, it’s a special destination for people to come and visit.”