For All Fans, For All Seasons 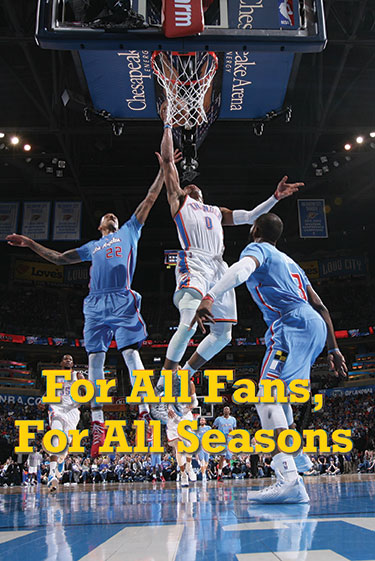 When talking sports in Oklahoma, the conversation usually begins with the Oklahoma City Thunder. Oklahoma’s first and only professional team of the highest rank, the Thunder has consistently been among the best in the NBA.

The Thunder organization has proven to be a great corporate citizen through the work of their charities. The Rolling Thunder Book Bus has distributed over 100,000 books to students since 2009 while Thunder Fit Clinics encourage an active, healthy lifestyle for middle school youngsters.

“We are humbled by how many fans across Oklahoma have embraced our team, welcoming the Thunder into their everyday lives,” says Dan Mahoney, spokesman for the Thunder. “To show our appreciation, we strive to give back to improve the lives of our neighbors and to strengthen this community.”

One of the most iconic sports franchises in American history, the Los Angeles Dodgers, launched their presence in Oklahoma this year on two fronts.

Up the Turner Turnpike, the Tulsa Drillers, a member of the AA Texas League, will also enjoy establishing new ties to the Dodgers, as the Drillers did not change ownership but switched their affiliation from the Rockies to the Dodgers.

The Drillers play at ONEOK Field, a 7,833-seat stadium nestled in downtown Tulsa that opened in 2010, and serves as a major impetus for the revitalization of downtown Tulsa.

Now in their second season, Oklahoma City Energy FC and the new Tulsa Roughnecks FC are members of the USL PRO League.

The Tulsa Roughnecks FC enjoy a unique partnership situation as the ownership group of the Tulsa Drillers also own the Roughnecks who will share ONEOK Field in downtown Tulsa as their home pitch.

Mike Melega, general manager of Tulsa Drillers baseball team, has taken on similar duties for the Roughnecks. “I strongly believe that the Drillers and Roughnecks will certainly help enhance the quality of life of Tulsans and Oklahomans. Sports teams provide a source of pride for the community and give fans a common bond,” says Melega.

Oklahomans can also enjoy watching — and participating in — a number of recreational sports.

Oklahoma City boasts one of the finest rowing venues in the country.

Many of the rowing, canoeing and kayaking athletes who will participate in the 2016 Olympic Games in Rio De Janeiro, will be training at the OKC National High Performance Center. The $10-million, 33,000-sq.-ft. facility headquartered in the Devon Boathouse, is designated an official US Olympic & Paralympic Training Center.

Mike Knopp, executive director of the Oklahoma City Boathouse Foundation, explains the venue’s success. “The accessibility aspect and being spectator friendly are key factors. Our corporate rowing program with over 50 teams creates lots of interest,” he says. “Our ultimate goal is to make rowing and paddle sports into mainstream sports.”

Fans of outdoor sports such as hunting and fishing are also in store for a treat in the Sooner State. Fishing fans are looking forward to the Bassmaster Classic as it returns to Tulsa in 2016. The Classic brings together over 50 of the world’s top anglers for a competition on Grand Lake O’ The Cherokees in northeast Oklahoma.

The previous Classic held in Tulsa in February 2013 saw over 5,000 spectators on the lake shore to watch the start, while over 106,000 fans witnessed weigh-ins at the Bank of Oklahoma Center over three days. According to Bassmaster officials, this was the second-most watched Classic in the event’s 45-year history with estimates that the event generated a $22.7 million economic impact for the Tulsa area, not to mention priceless state, national and international publicity.

The 2016 Classic looks to be even bigger and better.