Food on the Move 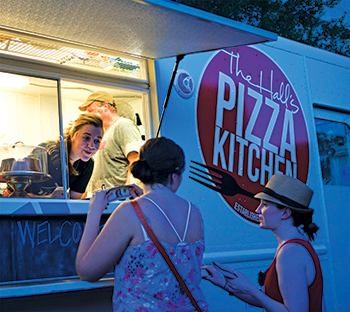 Park in the Pearl is Tulsa’s first permanent food truck court, which features
a stage, shaded seating and a variety of food trucks.
Photo by Nathan Poppe

From the traditional barbecue dinners piled high with ribs and brisket, to more adventurous ethnic fare like Thai or Ethiopian cuisine, foodies across the state have a world of choices.

In Oklahoma, that scrumptious choice of food is on the move as the food truck craze has taken hold. From the larger cities like Tulsa and Oklahoma City, to smaller towns like Ardmore and Edmond, food trucks are more than popular; they’re becoming a cultural phenomenon.

“Food brings people together, and it’s the one thing that binds us all,” says Josh Lynch, owner of the Tulsa food truck The Dog House.

Now, Oklahoma’s food truck culture is making real changes in the landscape of hunger and homelessness as well.

From March to October, between 20,000 and 40,000 people on average pack the streets of midtown Oklahoma City for the annual H&8th Night Market.

H&8th Night Market features more than 50 statewide mobile kitchens that offer everything from pizza and Ramen noodles to Hispanic food and barbecue.

“Though there have always been food trucks, I think the recent growth is because of who has a food truck these days. Chefs are turning out these amazing meals, and even Le Cordon Bleu grads are starting food trucks.”
— Josh Lynch, Co-Founder, Park in Pearl

“The allure isn’t just the trucks,” says Brian Bergman, one of the organizers of H&8th. “Good trucks are a draw, and Oklahoma City has some great trucks. The appeal is the community. People want to be together. They want to bump into unexpected friends, they want to try unexpected food and they want to be surprised.”

The festival was so popular that a permanent food truck court opened in Oklahoma City. Bleu Garten provides a venue where food trucks serve customers, but also boasts of clean restrooms, alcohol, shaded seating, light music and entertainment, which organizers say is a combination that few food truck parks in the nation provide.

In September, Tulsa announced that food truck aficionados now have a permanent place to find their favorite foods as well.

Park in the Pearl is Tulsa’s first permanent food truck court at 418 Peoria Ave. The park features a stage, shaded seating, water and electric and live music. A variety of local food trucks are on rotation, and four to six trucks serve food Tuesday through Sunday.

“I don’t think the food truck culture is going anywhere — it’s here to stay,” says Josh Lynch, who co-founded Park in the Pearl in addition to his regular truck duties.

“Though there have always been food trucks, I think the recent growth is because of who has a food truck these days,” says Lynch. “Chefs are turning out these amazing meals, and even Le Cordon Bleu grads are starting food trucks.”

Tulsa Eat Street Food Festival is in its fourth year, and although it doesn’t yet attract crowds the size of Oklahoma City’s festival, the event is hopping.

Willy Fontanez of La Gumbo Ya Ya, an Oklahoma City food truck specializing in Cajun and Puerto Rican food, made the decision to never turn away anyone who was hungry. Fontanez offers what he calls “suspended meals.” Those buying his food can donate an extra $5 that will go towards a meal for someone who cannot afford to eat.

“When we opened three years ago, we started the suspended meal program,” Fontanez says. “Last October was National Gumbo Day and it landed on a Sunday. Since we aren’t open on a Sunday, we still wanted to celebrate it. So we organized our first homeless food truck festival.”

Food trucks around Oklahoma are giving back to the communities that support them by addressing food poverty in the state.

In 2015, Fontanez organized food trucks once every other month to hit the streets on a certain Sunday to feed the homeless. Usually, he says, about four trucks end up handing out 400 meals. Next year, he plans to make the homeless food truck festival a monthly affair.

Other food companies are also giving back. Made Possible By Us, a local charity, has teamed up with Good Egg Dining Group and Whole Foods to launch “The Food For All Truck.”

This food truck will be present at local events selling meals, and 100 percent of the proceeds goes to the Regional Food Bank of Oklahoma, says Adrian Young with Made Possible By Us.

“Our mission is to have all Oklahomans help feed the hungry forevermore,” says Young. “If we can face hunger through popular culture and the popularity of food trucks, then you can make it tangible and relevant to the masses.”

In Oklahoma, food trucks are becoming less about food and more about community. To Bergman, that’s good news.