2016 Brings in Millions in New Investments 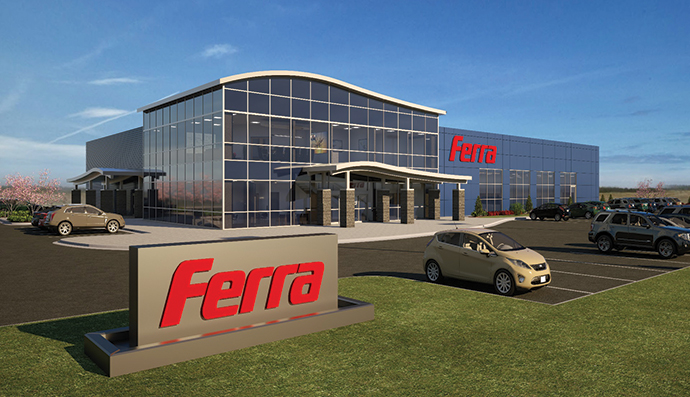 Ferra Aerospace moves into this new facility in September.
Rendering courtesy of Ferra
by CAROL CARTER

Commercial Metals Co. broke ground in April on a micro-steel mill in Durant, Oklahoma. Projected to ultimately create about 300 jobs in Durant, the project’s 20-year impact on the community will top $4 billion, says Tommy Kramer, executive director of the Durant Industrial Authority.

More new or expanding operations in Oklahoma include an aerospace company, a glass manufacturer and a wind farm.

Durant — with its population growing at 17 percent in the past decade vs. Oklahoma’s 8 percent — is one of the fastest growing areas in the state, Kramer says, citing U.S. Census Bureau statistics.

What’s the big deal about Durant? Location is among the top draws. Durant is about an hour’s drive north of North Dallas, Texas, and is situated about 90 minutes from the Dallas/Fort Worth International Airport.

The 4-lane highway running through Durant — US Highway 69/75 — handles in the neighborhood of 30,000 vehicles per day with about 40 percent being trucks.

The highway comes out of Laredo, runs through all the big cities in Texas, through Durant and up through St. Louis, Chicago or Kansas City and connects to Interstate 40, where traffic can head east or west, Kramer says.

Adding to the Economy

The Commercial Metals announcement occurred in 2015, when Oklahoma made 123 announcements totaling $1.2 billion in new investment, including 25 companies new to the state. These additions are expected to create 9,200 jobs.

Continuing the momentum, during the first quarter of 2016 the state saw 14 announcements totaling $614 million in new investment, including two companies new to Oklahoma. Those additions are expected to create 1,420 new jobs.

Ferra Aerospace Inc., is currently leasing a 10,000-sq.-ft. building in Grove, Oklahoma, will move into a new 35,000-sq.-ft. plant in September. Plant manager Mike Tackkett says plans are to add an additional 30,000 sq. ft. next year.

The Australian-based company will assemble and test weapons pylons and infrared mounts for the MH-60r (Blackhawk helicopter) and several components for the F-35 aircraft.

The availability of gigabit broadband in the area led Ferra to also house its global IT management at the site. “It only made sense as our communication within the business is mainly either e-mail or Skype, and data transfer is a very large portion of our business,” says Tackkett. Ferra spent around $1.3 million with local businesses last year and looks to at least double that this year, he says.

The Sapulpa facility began production in 1913 and now manufactures approximately 3.6 million glass bottles every day. That equates to more than 40 bottles per second. With the addition of the third furnace, Ardagh hired 70 new employees, creating a total employee base of 360.

“Ardagh Group’s Sapulpa facility is located in a region with a highly skilled workforce, business-friendly state and local governments and some of the lowest natural gas and electricity rates across the country, which is a key competitive advantage for our energy-intensive glass manufacturing operations,” Cedoz says.

Enel Green Power North American Inc. (EGP-NA) entered the Oklahoma market in 2012 with the commissioning of its 150 MW (megawatt) Rocky Ridge wind farm, and it now has the second largest wind capacity in the state. In January of this year, the company started the Drift Sand Wind Project in Grady County, Oklahoma.

Currently, turbines are being erected at the site, which is expected to be up and running by the end of this year, says Nick Lincon, head of business development for EGP-NA.

“Once it is operational, the Drift Sand wind project will be able to generate around 480 GWh (gigawatt hours) annually, providing enough energy to power the equivalent of more than 39,000 households,” Lincon says.

Oscar Hammerstein II apparently knew a thing or two when he wrote: “Oklahoma, where the wind comes sweepin’ down the plain.” Grady County, like most of Oklahoma, Lincon says, has some of the best wind resources in the country. “That, combined with the positive interaction with the local community and proximity to Oklahoma City, was what drew us to this location.

“In general, the renewable energy marketplace is highly competitive, and Oklahoma policy makers have done a lot to attract global investment dollars to the state,” Lincon says. “That has helped lead to the significant growth that Oklahoma has experienced achieving 5GW of wind capacity in 2015. This achievement is a hugely significant milestone for Oklahoma and signifies to the world the state’s presence as a leader in renewable energy.”