Get Your Kicks on Oklahoma's Route 66 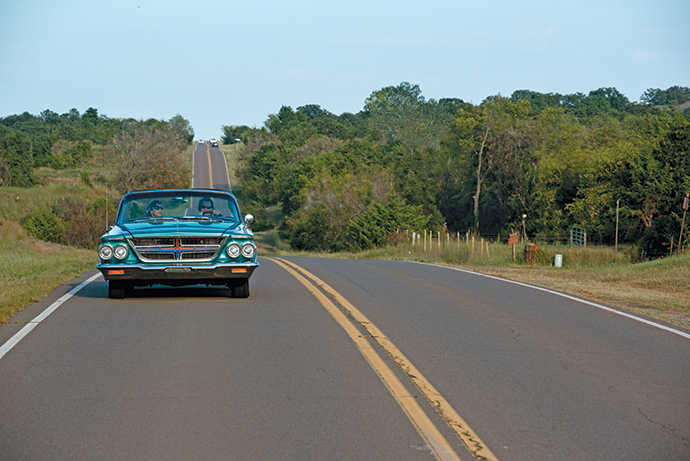 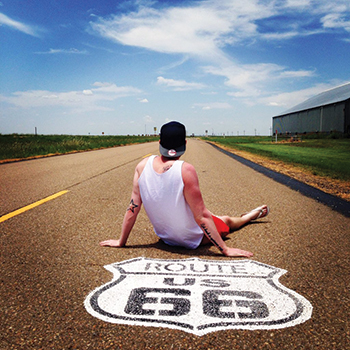 James Rollings poses for a photo along Route 66 while traveling the historic road through Oklahoma.
Photo courtesy of James Rollings

James Rollings of Middlesbrough, England, always dreamed of traveling the famous “Mother Road,” Route 66 in America, and in June 2014 that dream came true.

“Route 66 was always a dream of mine since I was young. The feeling of being free and traveling across the states really appealed to me,” Rollings said.

Along with three friends, Rollings flew to Chicago, picked up two Mustangs at the airport and hit the road.

“My favorite thing about the whole trip was we never knew who we would meet or what we would see. The driving wasn’t at all bad as we would see things you would never see in England, like the desert,” Rollings said.

“Oklahoma was one of the best places for pictures, and was one of the places with the most Route 66 signs. All in all, it was a fantastic experience which I would recommend to every one of all ages. We all said if we do it again, we would enjoy it even more as we know what to expect and we could spend more days in places we never got a chance to see.”

Thousands of Americans and tourists travel Route 66, which spans from Chicago, Illinois, to Santa Monica, California, each year. In 1926, the United States first created a national highway system and 2016 marked the historic road’s 90th anniversary since it was established as a federal highway. That federal designation remained until 1985.

Oklahoma is home to more than 400 miles — the longest stretch of the highway of any state — of Route 66. Over the years, many portions of the road west of Oklahoma City were replaced with the new Interstate 40. Turner Turnpike and Will Rogers Turnpike were built parallel to Route 66 east of Oklahoma City, and Route 66 remained on the old road as a free alternate to the turnpikes.

The Lure of the Mother Road

Michael Wallis of Tulsa is the author of 15 books, including “Route 66: The Mother Road,” the book credited with sparking the resurgence of interest in Route 66. An expert in all things “66,” Wallis said the continued allure of the road is due, in part, to the glorification of the route from popular culture, like Disney Pixar’s “Cars” movie, and a yearning to see “the real America.”

“The Route 66 Renaissance keeps building, and the road stays alive not only by domestic travelers, but by foreign travelers too,” Wallis said.

“In fact, Canada and Brazil are the fastest growing market of foreign travelers on Route 66. What this revival has done is put vehicular traffic from all over the world into our state, counties, cities and little towns. Obviously, that’s a huge commercial benefit.”

The string of attractions along Route 66 in Oklahoma, like the Totem Pole and Blue Whale, are popular with tourists on the road, and new attractions, like Pops in Arcadia, continue to be developed.

James Branam of Oklahoma rode a third of the Oklahoma mileage by bicycle in 2015. Over the years, he’s driven all of Route 66 through Oklahoma, and today, he still prefers to take Route 66 instead of the turnpike between Tulsa and Oklahoma City.

“I love the old buildings and the history, but I also like the lower speed limits and the easier pace,” Branam said. “The turnpikes are boring and soulless. Old Route 66 is the opposite. I think a lot of Oklahomans are drawn to the road because of its history. Many of us have relatives and friends who once traveled the road out west for better opportunities, either during the Great Depression or later on, and even though we know that life in another state or region isn’t as glamorous as it might sound, there is something about the possibility of picking up roots and moving on that is romantic.”

Branam was especially enamored of the many attractions along Route 66 in Oklahoma.

“The Ozark Trail marker, a few miles south of Route 66 east of Stroud, was one of my favorites,” he said. “Also, the old motels like the Trade Winds Motel where Elvis once stayed in Clinton and the small town cafes like Rock Cafe in Stroud and the onion burger places in El Reno are neat.”

For Oklahomans and global travelers, the familiar itch for adventure can be found along Oklahoma’s stretch of Route 66. It’s the perfect time to discover the history, romance, pop culture and freedom of the road while “getting your kicks along Route 66.” 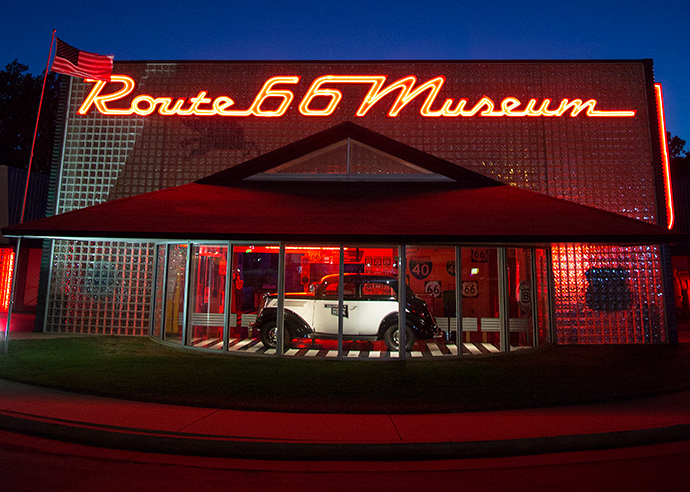 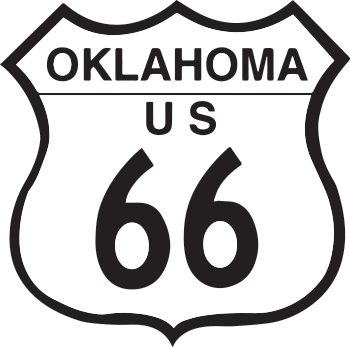 Oklahoma is home to over 400 miles of the Mother Road and is full of interesting, historic and iconic Route 66 attractions along the way. We’ve listed only a few here:

THE COLEMAN THEATER — The Coleman Theater in Miami was built in the 1920s and was a famous and popular venue for concerts, silent films, plays and more. Built by George L. Coleman Sr., the Spanish Colonial Mission-style exterior and the Louis XV interior thrill visitors with its gargoyles, dolphins, cherubs and faces throughout the facility. It is also home to the “Mighty Wurlitzer” pipe organ.

TOTEM POLE AT CHELSEA — Chelsea is home to Totem Pole Park, which boasts of the world’s largest concrete totem pole which stands 90 ft. tall. The park was created in the 1930s and became a favorite Route 66 roadside attraction.

THE BLUE WHALE OF CATOOSA — The Blue Whale near Catoosa is a favorite Route 66 attraction that was built in the 1970s as a swimming hole. Although closed for many years, the big grinning blue whale still attracts tourists from all over the world.

ROUND BARN — At 107 E. Highway 66 in Arcadia, The Arcadia Round Barn, listed in the National Register of Historic Places, is a unique landmark. The round barn began when William Harrison Odor — known as Big Bill — began building his one-of-a-kind barn in 1882. The hemispherical shingled roof was completed in 1898, and today, it is the only real “round” barn in America (other “round” barns are polygons with six or eight sides).

Just down the road from The Round Barn is one of Route 66’s newest attractions, POPS! This gas station is unmistakable with its 66-foot-tall LED soda bottle up front. POPS also offers a collection of more than 8,000 soda pop bottles and offers 650 soda choices from around the world.

LUCILLE’S SERVICE STATION IN HYDRO — Lucille’s Service Station was built in 1929 in Hydro and served the travelers who took the Route 66 Highway. In 1941, the Hamons family took over the operation of the station and Lucille Hamons, nicknamed “Mother of the Mother Road,” ran the business for 60 years. The classic gas station is only one of two gas stations left of its kind on Route 66 in Oklahoma.

THE PONY BRIDGE — The Pony Bridge, or U.S. 281 bridge, was built in 1933 over the South Canadian River, features 38 “pony” trusses and has been features in numerous magazines and videos. It was also made famous for the scene where Grandpa is buried in the Oscar-winning movie “The Grapes of Wrath,” was shot near the west end of the Pony Bridge.