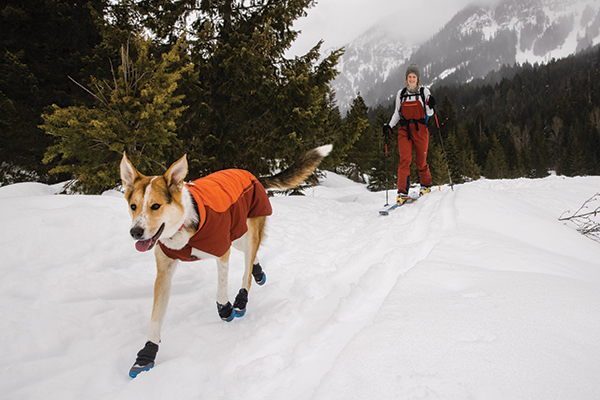 Patrick Kruse, dog outfitter and self-described dog “guardian,” is okay with a canine commandeering the couch. But what makes his tail wag is the thought of a snowy mountain hike with his family’s new puppy.

“Dogs,” Kruse believes, “are a great addition to our outdoor adventures. They follow their nose, and they’ll take us to places that we may not have chosen. Sometimes, we may not appreciate it. But for the most part, it’s usually an enlightening opportunity.”

Thus was the inspiration for Ruffwear, Kruse’s Bend-based company that supplies REI and other outdoor retailers with canine coats and jackets, insulating boots, rainwear, collars and leashes — even floatation devices — to bring four-legged friends onto the outdoor travel team.

“My dog,” Kruse explains, “doesn’t kayak with a paddle down the river, but he may run the bank alongside me. And in that instance, I would want him in a life jacket.”

Bend, perched as it is at some 3,600 feet on the eastern slope of the Cascade Range, turns out to be the perfect proving ground, Kruse believes, for Ruffwear’s dogwear. In the shadow of snow-capped Mt. Bachelor and the Deschutes National Forest, the surrounding landscape, says Kruse, affords “not only snow and alpine environments, but also gives us this riparian habitat where we’ve got water and marshlands and lakes. And then as we go further into the desert to the east, we’ve got scrub, sagebrush, pronghorn. We have volcanic buttes and geothermal. We’re on the Ring of Fire. It’s a primitive and very diverse environment.

“I can be out in a blizzard in 20 minutes,” says Kruse, “or I can be out in a harsh desert environment in 20 minutes, depending on which way I go. I can get on the Deschutes River, literally two blocks from my home and float more than 100 miles all the way to the Columbia, going through numerous microclimates along the way. Bend’s diverse environment,” he says, “allows us to quickly see how our gear is performing.”

How a Billion-Dollar Business Blossomed

“It starts with how the natural environment shapes how we live and work and play,” says Kruse, “and then, like Silicon Valley, it becomes a natural progression. Because of Nike’s early growth, Adidas moved to Portland because of the skillset in the footwear industry. Then you have the shoelace suppliers, outsole manufacturers, different fabric suppliers.”
Similarly, Kruse believes the growth of the outdoor apparel and gear industry mimics a never-ending human quest to discover and refine means of amusement.

“Skiing,” he says, “went from downhill skiing to Nordic skiing, to skate skiing and all these other offshoots. We go from road biking to cyclocross and now gravel bikes, from Hobie Cats to sailboards to windsurfing and now into kiteboarding. That’s really what happens here. You’ve got this hotbed of active, outdoor folks who are engaged in their environment, and they’re figuring out what they need to make that activity even more engaging by extending the time and the opportunities.”

“People who are into mountain biking now want to go for more than one day. And so, they need packs for their bikes, but nobody’s making packs. Well, pretty soon, these small bike packing groups get together and create a brand and start selling that because now there’s a demand for it.”

A Matter of Degrees

Oregon State University-Cascades is one of the rare institutions of higher learning where a student can earn a bachelor’s degree in outdoor products. Launched in 2020, the program is offered by the school’s College of Engineering.

“Most people enter the outdoor industry circuitously and rarely right out of college,” says Geoff Raynak, executive director in residence of the degree program and, coincidentally, Ruffwear’s former oversight of innovation and design. “The OSU-Cascades outdoor product degree taps into all academic disciplines, exposes students to a rigorous curriculum, and will develop industry leaders who can balance product, profit, people and the planet.”

“The strong engagement of business leaders in helping develop this new academic program demonstrates the need for Oregon-based teaching and research in outdoor products and services,” said Becky Johnson, vice president of OSU-Cascades. “Outdoor companies in Central Oregon and beyond already have expressed interest in hosting student internships required for the degree.”

A $250,000 gift from Bend-based Hydro Flask provided seed funding for the program and paved the way to hire Raynak, also a former designer at Nike. Hydro Flask also helped to develop the concept for the degree program.