A Haven for Brewmasters 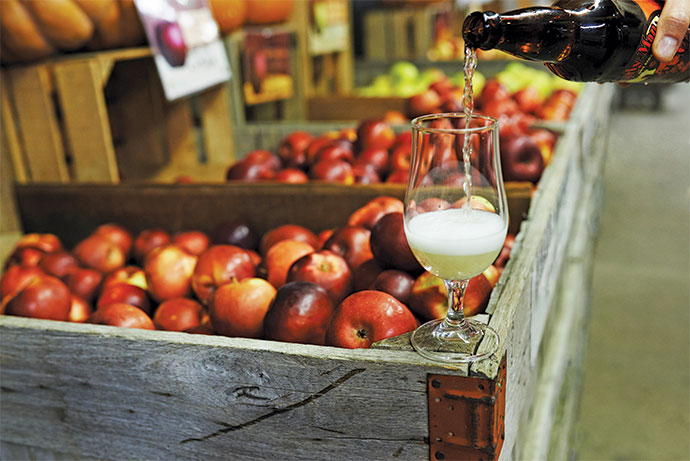 Frecon Farms’ owners find a strong base of consumers in Pennsylvania who are interested in working with and supporting farms involved in artisan and craft processes.
Photo courtesy of Frecon Farms
by RACHEL DURAN

In just two years, Wyndridge Farms in York County, Pennsylvania, has gone from one employee to 100 to support its burgeoning brewery and cidery operations, products it sells in 11 states on the East Coast. “We have a top-notch facility for both beer and hard cider and we expect to double our 2015 sales in 2016, for both beer and cider, along with a very busy restaurant and event venue,” says Wyndridge Farms’ Co-owner Steve Groff.

Wyndridge recently completed a $1.6-million expansion to add new brewery tanks, gathering space and warehouse space. “Craft brewing is exploding,” Groff says. Hard cider sales in cities throughout Pennsylvania rank third, sixth and seventh as the highest selling cider markets in the nation when compared to percent of beer market sales, according to a statement by Penn State University in February 2016 when it released a guidebook to navigating the hard cider industry.

Pennsylvania’s hard cider and craft beer companies are among the nation’s leaders in these sectors, supported by several advantages including a leading location for apple growers, an experienced workforce involved with long-running breweries, low costs of entry for startups, and associations advocating for the industries in regard to more favorable regulations.

Pennsylvania’s beer industry ranges from the oldest brewery in the United States — Yuengling Brewery in Pottsville — to Tröegs Brewing Co. in Hershey to Rusty Rail Brewing Co. in Mifflinburg to the Benjamin Brewing Co. in Kensington and many more craft brewers, which number 178 craft breweries in the state, according to the Brewers Association.

The DCED says the state’s mineral rich water is an advantage to brewers, such as those in Philadelphia, which is home to an emerging craft brew industry.

And don’t forget the fruit. Groff says one of the main advantages for his hard cidery operation stems from “… the incredible fruit all around us. Pennsylvania and New York vie for the third and fourth spots in apple production in the country.” Eleven million bushels of apples are grown annually in Pennsylvania. Wyndridge buys fresh pressed juice from local orchards.

For example, the state’s apple growers, custom cider presses and nurseries are well positioned to tap into the hard cider market, an industry which in 2014 saw sales grow by 71 percent.

As is often the case with expanding industries, there are challenges. Pennsylvania’s 30 hard cider companies have banded together in order to overcome hurdles, which include a “complicated marketplace” and regulatory challenges.

“The increases in the industry have complicated the market for the consumer because there are so many types of cider that have come on the market,” says an owner of Frecon Farms, Steve Frecon. The family’s orchard and retail store, located in Boyertown in Berks County, has been operating since 1944. The hard cidery began about eight years ago.

“There are large and distinct differences from what you see on TV and the craft ciders that are being made by small farms, orchards and cideries throughout the region,” Frecon says. Frecon Farms has replanted and changed up its orchards in order to produce the fruit types they need to make hard cider the way they want to make it.

Frecon and his brother Hank along with other hard cider producers in the state, began the Pennsylvania Cider Guild to organize the industry, conduct consumer education and call for legislative reforms. The guild has had the support of the Pennsylvania Apple Marketing Board and the apple industry, as well as legislators.

By engaging with government leaders the industry has witnessed reforms to the state’s liquor bill. “Under the state’s laws, hard cider was not thought of or forgotten about,” Frecon says. “Licensing and distribution under the current legal structure for hard cider was a big challenge for us to get our arms around.

“Our legislature is concerned about agriculture and is eager to see agriculture supported, and see small businesses grow that are attaching themselves to agriculture value-added products,” Frecon says.

What’s more, the state has a solid manufacturing past, complete with the infrastructure needed to support expansion activities. “Young businesses need the infrastructure to manufacture product and there are a lot of buildings set up to run manufacturing or production facilities,” Frecon says. The buildings feature utilities, high ceilings and loading docks. “There is a lot of real estate available to rent,” Frecon adds.

These assets and others are important to industries like hard cider manufacturers because “in the last three to five years there has been an incredible renaissance both at the micro and big companies,” Groff says. “This seems to be a movement that will not slow down in the near future.”