A vibrant arts scene shapes quality of life throughout the state. 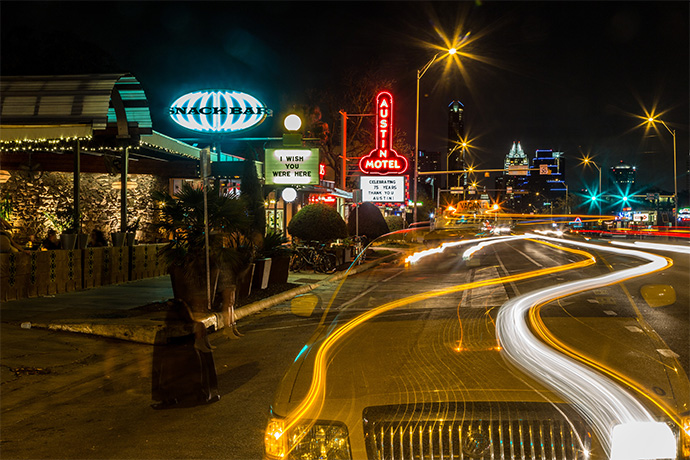 hether you prefer small-town charm or big-city amenities, Texas has a way of making you feel right at home. Perhaps that's why the Lone Star State continues to dominate national headlines when it comes to quality of life.

Fodor's recently featured the Dallas suburb of Denton among "America's Best Main Streets," thanks to its unique mix of dining, shopping and cultural offerings. Livability.com ranked Fort Worth No. 1 in its "Top 10 Best Downtowns, 2014," citing economic factors along with the city's vibrant entertainment district.

And in its recent story about "aspirational" cities (those that represent the greatest opportunities in both jobs and quality of life), The Daily Beast placed Austin in the No. 1 spot, with Houston, San Antonio and Dallas also listed among the top 15 cities.

It was an employment opportunity that first brought Jay and Melanie Plemons to the Austin area in 2005. But Melanie says the capital city had been calling their names long before that.

"We had wanted to move here for the arts and music scene for years - that was definitely one of the things that attracted us to this area, along with Austin's funky, 'come-as-you-are' vibe," Plemons says. "Austin's live music scene includes every genre imaginable, and different cultural groups offer events throughout the year.

"I especially like that Austin has an abundance of outdoor concerts, festivals and events year-round, thanks to our mild weather," she adds, pointing to unusual events such as the Zilker Park Kite Festival and an annual "Bat Fest" that includes live music, children's activities and a nocturnal celebration of the world's largest seasonal bat colony. "There's never a lack of things to do."

The same could be said for Houston - a city that manages to balance its rich history with a decidedly cosmopolitan feel. Whether strolling through the expansive museum district or taking in a show at the renowned Alley Theatre, residents here have plenty of options.

"Houston enjoys one of the largest and most diverse arts and culture scenes in the U.S., with resident professional companies in ballet, opera, symphony and theater," says Greg Orale, president and CEO of the Greater Houston Convention & Visitors Bureau. "We also have 18 major museums and galleries within walking distance of each other. These cultural events and exhibits not only support nearly 30,000 local jobs, they also draw an average of 9.2 million visitors each year, spur new development and infrastructure - including a rail line through the museum district - and have played a major role in Houston's urban revitalization efforts." 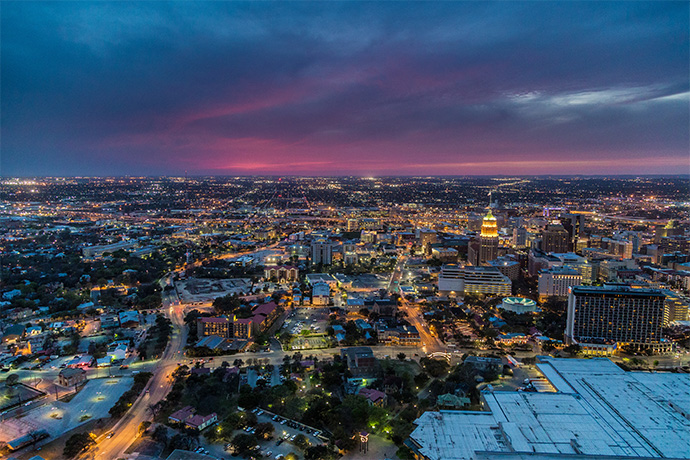 The charms of San Antonio radiate around the clock.
Photo courtesy of VideoLens.tv

Dallas also provides an incredible assortment of arts and cultural opportunities - from family-friendly festivals to a sizzling night life.

"The arts community brings an element of sophistication and beauty to the city, offering art enthusiasts of all ages a rich experience and education - whether it's walking through the Dallas Museum of Art or exploring the newly opened Perot Nature and Science Museum," says Phillip J. Jones, president and CEO of the Dallas Convention & Visitors Bureau. "Dallas boasts the largest urban arts district in the nation, with 160 museums and art galleries and 15 venues designed by Pritzker prize-winning architects. The nonprofit arts industry in Dallas makes a significant contribution to our local economy, typically upward of $300 million annually."

There's no question that such amenities enhance the state's quality of life. But Texas residents might be surprised to realize the incredible economic impact of arts-related programs and resources.

According to a recent study by the Texas Cultural Trust, the Texas arts and culture industry "generates $4.6 billion per year in taxable sales, contributing nearly $290.1 million in state sales tax revenue in 2011."

" There's never a lack of things to do."

- Melanie Plemons on the attractions of Austin

That's no surprise to Anina Moore, director of communications at the Texas Commission on the Arts, in Austin. Charged with "advancing the state economically and culturally by investing in a creative Texas," TCA supports the burgeoning arts sector through a variety of grants, arts education, cultural tourism and artist sustainability initiatives. TCA's cultural district program also works to revitalize local communities by strengthening creative assets.

"In general, the arts can be a way to celebrate cultures and bring communities together," she says. "However, Richard Florida's landmark book, 'The Rise of the Creative Class, Cities and the Creative Class' also examined cities with strong arts communities - including Austin - and their successful attraction of creative workers, and thus, creative industries."

Then there's the annual Houston Art Car Parade, which attracts more than 250,000 spectators each year.

"This event celebrates the wacky and allows citizens to express themselves through their vehicle - whether it's a car, lawnmower, whatever," Moore says. "It's one of those things that must be seen in person for the full scope to be realized. But luckily, the parade has inspired the establishment of the Art Car Museum."

Halfway between Houston and Austin, the tiny hamlet of Round Top also supports a thriving arts community.

Classical pianist James Dick established the Round Top Festival Institute in 1971, with the idea of training young musicians through intensive summer programs and public performances.

"Through the years, the Festival Institute has expanded its offerings to host the pre-eminent poetry festival in Texas, year-round musical performances, an herbal forum, a theatre forum, and a forum on library and museum collections," Moore says. "It's just a magical destination."