The Perfect Climate for Dreamers

Texas rolls out the welcome mat for corporate growth. 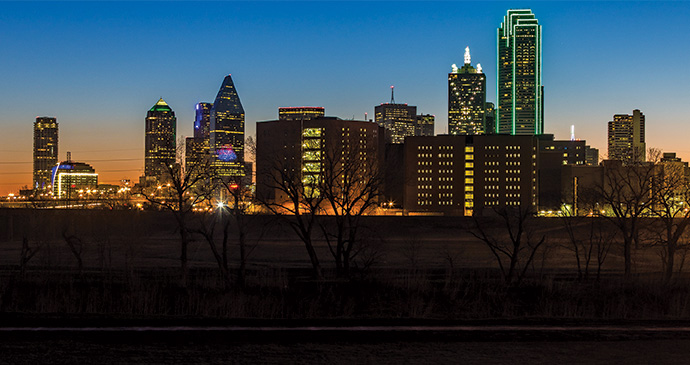 Gov. Rick Perry likes to say that Texas "is a state where a dream can be put to work."

If that is true, then there must be a lot of dreamers in Texas these days.

From Amarillo to Brownsville, from El Paso to Beaumont, and from Sherman to Laredo, Texas is putting more dreams to work than any other place in America, according to the latest findings of Site Selection magazine.

For the second year in a row - and the fifth time in the last decade - Texas took home the coveted Governor's Cup award from Site Selection by recording more corporate facility investment projects than any other state in the nation in 2013. 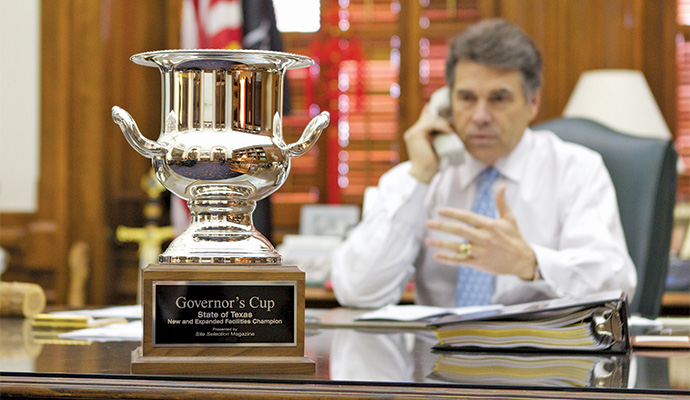 Gov. Rick Perry has led the charge to create a welcoming business climate in Texas. Hundreds of corporate project investments during his tenure have been the result.
Photo courtesy of the Governor's office/Stephen Stephanian

Wins like this are nothing new for Texas. Perry's state captured the Site Selection Governor's Cup previously in 2004, 2005, 2010 and 2012. It also placed second four times in the past 10 years.

With outside validation like that, it's no wonder that companies continue to invest millions of dollars into new facilities and larger workforces in Texas.

A state that boasts the best business climate in America doesn't have to beg.

From Chevron Phillips Chemical Company's $5-billion investment into a new petrochemical plant in Sweeny to Apple's 3,635-job Americas Operations Center in Austin, Texas is on a roll. It is landing some of the largest jobs announcements and biggest capital investment projects in the United States, and the trend shows no signs of abating anytime soon.

" You don't feel overly bureaucratized when doing business in Texas.They make you feel like they are your partner."

"Robust is a word that I would use right now to describe the Texas business climate," says Michael Rareshide, vice president of Partners National Real Estate Group in Dallas. "Texas is extremely dynamic. It has a can-do attitude. As a state, it makes things in business generally easy to work with. You don't feel overly bureaucratized when doing business in Texas. They make you feel like they are your partner."

He should know. A nationally prominent site selection consultant, Rareshide regularly advises companies on where to locate their next business operation and facility investment.

"Corporate executives should also know that Texas, despite all of its robust activity, is not a market that is overheated," says Rareshide. "It has not run amok. Rather, it is very easy for Texas to leverage itself against a lot of other states that have unfavorable tax situations."

With no personal state income tax, Texas makes worker relocation an easy sell, notes Rareshide. "For companies, this is a very easy proposition. They make employee relocation extremely attractive. They can save you money by putting more money back into your pocket."

It's a low-tax state for companies too. According to the Tax Foundation, Texas offers the 11th-best business tax climate among the 50 US states.

In the South Central region of the country, no other state even comes close. The four states bordering Texas - Arkansas, Louisiana, New Mexico and Oklahoma - all rank in the 30s.

Rareshide cites examples such as Allstate investing in a 5,000-employee campus in Richardson, just north of Dallas. "From a macro level, no matter where you locate in Texas, you can find the people skills and government assistance and the wherewithal to have a thriving business here," he says. "Corporations can find a quality of life here that a lot of professional companies need and want. Even if you need to hire a couple thousand employees, you can easily find that here in Texas."

Industrial diversification is a big selling point as well, the consultant adds. "Data centers, high-tech companies, healthcare businesses, corporate headquarters, and distribution-warehouse operations are all hot industry sectors in Texas right now," Rareshide points out. "From a logistics standpoint, you can go coast to coast within two to three days from this central US location. And we continue to have multi-billion-dollar road improvement work going on here to improve our Texas roads and highways."

This growth wave is occurring all over the state, he notes. "It's not just happening in the big cities of Dallas, Fort Worth, Houston, Austin and San Antonio," says Rareshide. "It's occurring in places like Richardson, Frisco, Plano, McKinney and Denton. In the DFW Metroplex, business is booming in the suburbs. The north-south tollway and east-west routes are opening up new areas of growth in the Dallas-Fort Worth-Arlington MSA. There is still a lot of cheap land out there. Employee demographics are here. The employee talent is here. This is a very attractive destination for businesses right now."

In other parts of the state, the energy sector is driving the Texas business climate. In places like Houston, Midland and Odessa, the development sector is thriving, creating facility investment projects at a pace not seen in the state's history.

The Midland-Odessa area is the epicenter of fracking, and the discovery of the Eagle Ford Shale southwest of San Antonio has resulted in a boom in oil and gas projects. These exploration investments are leading to a bevy of industrial plants in other parts of the state.

"From Houston to Port Arthur and Beaumont, that whole region of Texas is exploding right now in the chemical industry due to the low price of natural gas here and the high price of gas in Europe," says Dr. Loren C. Scott, a nationally renowned energy analyst and economist based in Baton Rouge, La. "We are just eating up Europe right now. Our share of that pie is growing because the Europeans cannot compete with the gas bonanza we have going on right now in Texas and Louisiana. They don't have the extraction infrastructure that we have, and they don't have the pipelines either. As a result, these huge petrochemical plants are coming into Southeastern Texas now."

Costs are a huge factor, notes Scott. "Because the shale is so shallow, the break-even price for oil is fairly low in Texas right now," he says. "In the Eagle Ford Shale, it is only 42 dollars a barrel. Compare that to the Tuscaloosa Shale [in Alabama], where the break-even point is 93 dollars a barrel, and you can see what a tremendous cost advantage Texas enjoys now. People are making lots of money harvesting oil and gas in the shallow shale deposits in Texas these days."

It also makes a difference that Texans support the energy industry, Scott says. "Texas has a long history of backing the oil and gas industry - not every place does," he notes. "Texans see the jobs and they like it. Not every place does. Railroad District 8 in Texas has 294 rigs in it right now. It's just rocking and rolling in oil and gas extraction." 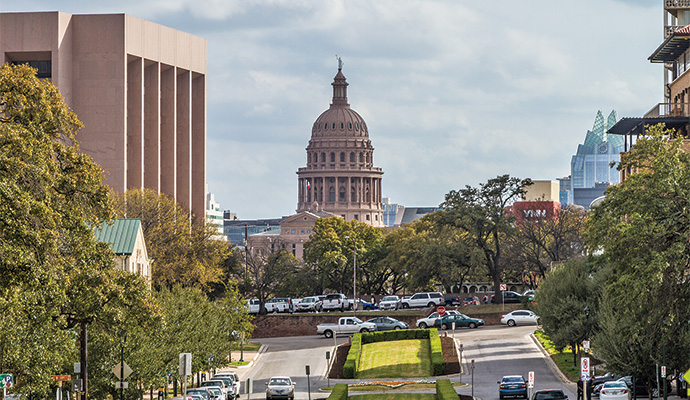 Looking forward, Scott says, "I don't see a big downside for Texas anytime soon. Texas is very friendly to business. Texas passed a losers-pay tort reform bill. If you have to pay the costs of everybody when you file a frivolous lawsuit, that suddenly changes the equation dramatically." 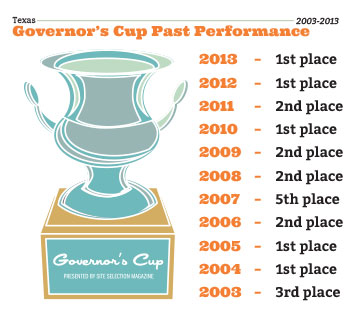 The ripple effect of a positive business climate is being felt statewide.

From 2000 to 2013, Texas enjoyed stronger job growth than the rest of the country. The Federal Reserve Bank of Dallas also reported on March 6 that Texas led the nation in the creation of new jobs at every level of pay.

"Texas has created more 'good' than 'bad' jobs," the Fed reported. "Jobs in the top half of the wage distribution experienced disproportionate growth. The two upper-wage quartiles were responsible for 55 percent of the net new jobs. A similar pie chart cannot be made for the rest of the US, which lost jobs in the lower-middle quartile over the period."

Results like these are why consumer financial information organization NerdWallet recently rated several Texas cities among the best in the nation for job seekers in the largest 50 US cities. Austin ranked No. 1 in the US, while Fort Worth ranked third, San Antonio 10th, Dallas 13th, Arlington 16th and Houston 18th.

Overall, Texas added 274,200 new jobs over the past year - good for first in the nation.

Texas also ranked as the top exporting state for the 12th consecutive year, with more than $279.7 billion in goods shipped out of state. The top destinations were Mexico, Canada, Brazil, China and the Netherlands.

Despite these gains, Gov. Perry has made it clear that Texas will not rest on its laurels.

With the largest deal-closing incentive fund of its kind in the nation, the welcome mat will be out in full force for the next CEO who's ready to move to Texas.