The Texas technology industry is robust and growing. 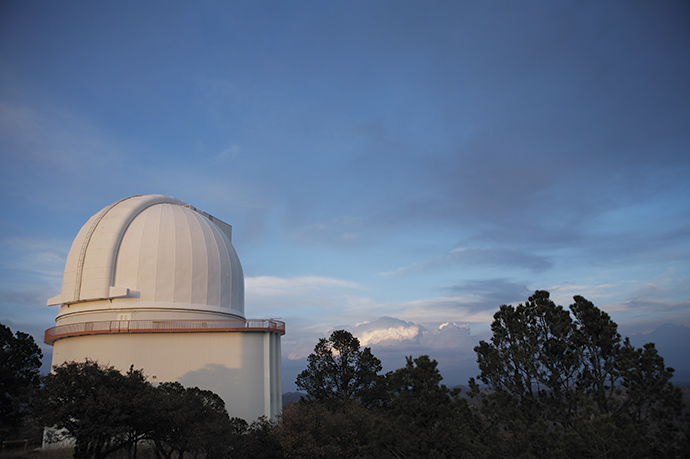 hen you think of Texas’ booming businesses, your mind may first turn to energy or airlines. It may come as a surprise that Texas is also the nation’s leading state for technology exports.

From startup ventures to established companies, Texas’ tech businesses are among the most active and successful anywhere in the world. They include such brand names as AT&T, Dell, Texas Instruments and Samsung, not to mention the entrepreneurs who are now creating tomorrow’s ground-breaking technologies and thriving in Texas’ innovation ecosystem.

Today, Texas’ rapidly growing tech industry accounts for over 6 percent of the state’s private-sector employment, with wages above average that constitute over 11 percent ($56 billion) of the state’s total payroll.

The largest tech sector in Texas, by employment, is IT services, including computer systems design, data processing, hosting and other services. The industry practically started in Texas with Ross Perot’s founding of Electronic Data Systems in 1962. The sector encompasses a wide range of services, and virtually all of the industry’s major players have a sizeable presence here.

Richardson, a Dallas suburb, has long been home to many of the world’s leading telecommunications companies, earning it the Telecom Corridor moniker. Today, the North Texas region alone boasts the world headquarters, or large operations, for such prominent telecom companies as AT&T, Samsung Telecom, Fujitsu, ZTE, Cisco, Alcatel, Ericsson, Verizon and MetroPCS.

The semiconductor sector is also vital, with the Austin area boasting large chip production facilities for Samsung, Freescale and Cirrus Logic, plus numerous suppliers and support companies. Texas Instruments has several large fab plants in North Texas — including its Richardson fab plant, which was one of Site Selection magazine’s 2003 Top Deals of the Year.

Computer and electronics firms, such as Dell in Round Rock and Hewlett-Packard in Plano and Houston, have major presences across the state. Software companies are also thriving, from Houston-headquartered BMC Software to Apple’s growing Austin campus, which could soon house the company’s largest employment cluster anywhere.

Texas’ dynamic video game development and publishing industry is growing at an annual rate of 16 percent from 2009 — 2012, significantly faster than the national average of 10 percent. While Austin is Texas’ biggest gaming industry hub, the Dallas area has also seen dramatic growth in its video game studios and gaming software development jobs, with leading companies like id Software, Nerve Software, Gearbox and Zynga.

Across the state, numerous universities and colleges are offering gaming design degrees. Given this solid platform for success, it’s no wonder that Texas now has nearly 12 percent of the nation’s gaming industry employment — second only to California.

Social and interactive media businesses are also emerging across Texas, spurred by the state’s legacy of technological innovation and showcase events such as Austin’s SXSW Interactive, a breeding ground for new ideas and technologies, which could rank as the largest of its kind in the world.

What drives Texas’ leadership in technological innovation and entrepreneurship?

The factors include: a strong engineering legacy, access to early-stage funding and venture capital for entrepreneurs; relatively low start-up costs and low cost of living; a strong and talented workforce; and a business-friendly climate.

The presence of strong, national research universities such as The University of Texas at Austin, Texas A&M, UT Dallas and others, also creates numerous opportunities for partnerships and programs that support vital research and train the future tech workforce. A growing number of tech incubators and groups providing collaborative resources for entrepreneurs provide a further boost to tech innovation.

Texas’ culture of innovation is clearly evident in the more than 10,000 patents issued here annually — ranking second nationally. When the US Patent and Trademark Office recently sought a location for its southwest regional satellite office, it’s no wonder a site was chosen in Dallas.

The continued success of the Texas economy, across a wide variety of industries, is also a key factor.

Sectors that are major users of technology, such as energy, retail and financial services, are thriving in Texas and providing critical demand for even more and better tech services and products.

Going forward, Texas is keenly focused on sustaining its tech industry leadership through policies that foster innovation, create tech jobs and provide a strong foundation in STEM education for the next generation of employees.

In short, Texas is a state known for taking big risks, and succeeding in a big way, by always looking to the future. Just like the tech industry. 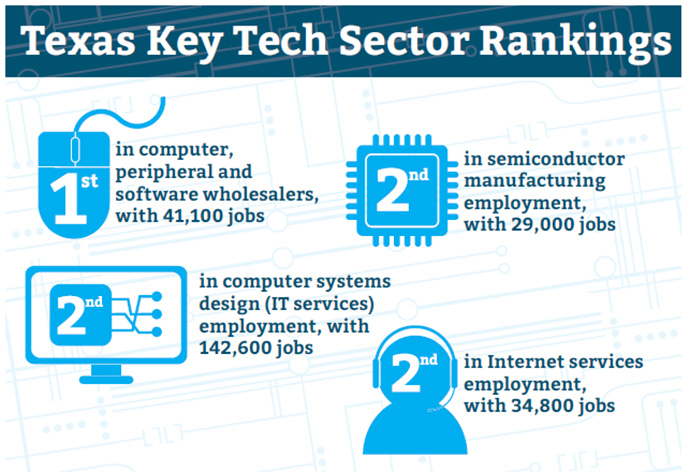