Riding to the Rescue

When the pandemic arrived, Texas A&M was ready to saddle up. 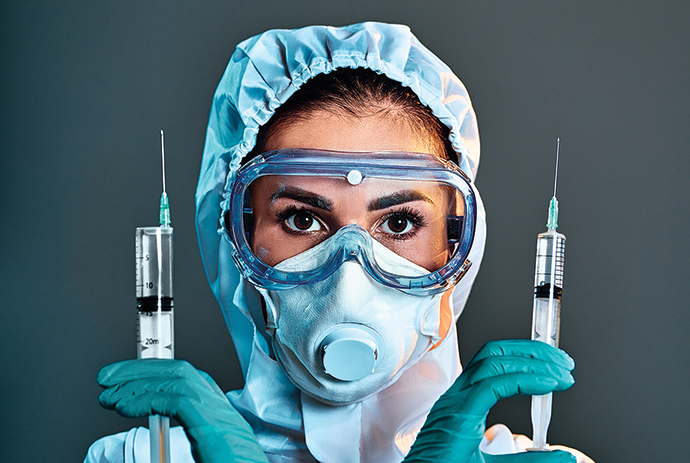 The Texas A&M Center for Innovation in Advanced Development and Manufacturing is a medical R&D facility tailor made for the times. One of only three such public-private partnerships established under the auspices of the U.S. Department of Health and Human Services, the Center is charged with accelerating research and development of vaccines and therapeutics for rapid production during pandemics and other national emergencies. As such, CIADM is playing a critical role in global battle against COVID-19.

In January 2021, CIADM its long-time partner, FUJIFILM Diosynth Biotechnologies, announced the start of production of a COVID-19 vaccine candidate with the support of the U.S. government’s Operation Warp Speed. FUJIFILM Diosynth is manufacturing the NVX‑CoV2373 vaccine of Maryland-based Novavax in support of Phase III clinical trials. A university spokesman says the Center is producing a second candidate vaccine in conjunction with the French pharmaceutical giant, Sanofi.

The federal government first reserved space at the facility in July 2020 by tapping into its agreement with the CIADM, which oversees the largest scale-out cell culture manufacturing plant in the U.S. Moving swiftly, FUJIFILM Diosynth accelerated a planned capacity expansion and added 260 positions, thus doubling its local workforce.

“Our team has worked around the clock since July and we’re starting to see light at the end of the tunnel,” said Dr. Gerry Farrell, Chief Operating Officer, FUJIFILM Diosynth Biotechnologies, Texas. “There is great pride and satisfaction on our team for being part of the solution to the pandemic. We are pleased to bring our technical expertise and world-class facilities to support the mission of Operation Warp Speed in bringing a safe and effective vaccine to the world.”

The Center is also part of the Public Health Preparedness and Response initiative that has been established at the Texas A&M Health Science Center (TAMHSC). As such, when the pandemic arrived, A&M was ready to join the fight.

“The Texas A&M System is proud to be part of this unprecedented manufacturing effort,” said John Sharp, Chancellor of The Texas A&M System. “Our partnership with FUJIFILM Diosynth Biotechnologies confirms the importance of the CIADM program for Texas, the nation and the world.”

With the COVID pandemic having shone exposed a national shortage of drug manufacturing capacity, another new project involving CIADM takes on outsized importance. Matica Biotechnology, new partner of the Center and a contract development and manufacturing organization, broke ground in February 2021 on a new production facility. Matica specializes in clinical and commercial production of cell and gene therapies.

“The global demand for virus products continues to outpace the capacity for production under the stringent practices required by regulatory agencies for human use,” said Matica Bio CEO Byung Se So, at groundbreaking. “Our new facility will help to close that gap by establishing state-of-the-art, modular virus production cleanrooms integrated with the latest vector technologies to maximize speed, flexibility and efficiency throughout our clients’ product development cycle.”

So heaped praise on the biotech cluster that has steadily arisen around Texas A&M.

“The Brazos Valley area, including College Station, is rapidly becoming one of the most important centers of biotechnology in the country, and it was an easy decision for our company to locate here. The availability of a skilled workforce along with the influence of the Texas A&M University System, will support the level of rapid job growth that we expect throughout the next few years.”

“The Brazos Valley area, including College Station, is rapidly becoming one of the most important centers of biotechnology in the country.”
— Byung Se So, CEO, Matica Bio

Matica’s 25,000-square-foot facility in College station is to house virus production suites, development laboratories and offices. It is designed for the rapid development, scale-up and production of Lentivirus and AAV products for clinical supply. An affiliate of CHA Biotech, Matica provides viral vector GMP manufacturing services for cell and gene therapies, vaccines, oncolytic vectors and other advanced therapy products.

As home to more than 4,000 life sciences firms, and with more than 100,000 workers employed in the field, Texas is one of the leading life sciences states in the country.

Top Fortune 500 companies such as Kimberly-Clark and Celanase are based in Texas. Other global leaders with operations in Texas include McKesson, Galderma, Novartis, Abbott, Allergan, Lonza, Johnson & Johnson and Medtronic.

Texas A&M is currently is building a half-billion-dollar health sciences complex at TMC. The $546 million complex includes $145 million toward the purchase and renovation of the 18-story “EnMed” building, as well as $401 million in private-sector funding to build two new towers adjacent to the EnMed structure.