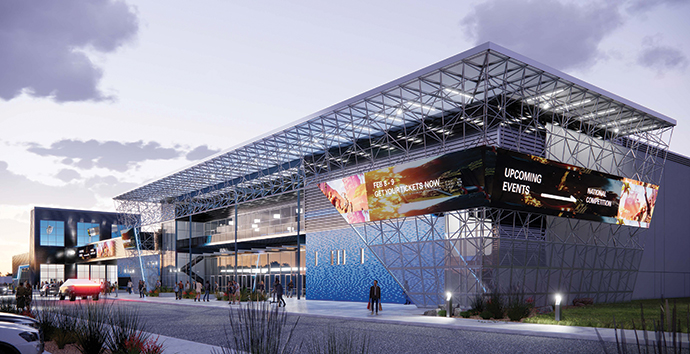 Bolstered by one of the nation’s largest military populations, including the Sixteenth Air Force (Air Forces Cyber) headquarters at Joint Base San Antonio Lackland, and the National Security Agency (NSA) Central Security Service Crypotologic Center and the FBI Cyber Division, San Antonio’s network of military and private sector businesses has created a unique atmosphere of innovation and defense technology.

Port San Antonio, built on the site of the former Kelly Air Force Base, is home to more than 14,000 jobs. Nearly 4,000 of those jobs have been added by the port’s tenant customers since its Tech Port vision was launched in 2018. The Tech Port vision aims to leverage the port’s unique industrial platform and deliver innovation technology solutions to large industries including aerospace, energy, defense, cybersecurity, manufacturing, logistics, financial services and medicine.

Directly across the street from Joint Base San Antonio Lackland, Port San Antonio has recently made several key investments to its 1,900-acre campus. In 2018, the port completed the first facility at Project Tech, a 90,000-sq. ft. facility built for secure research and testing laboratories for cybersecurity. In September 2019, the port expanded again with a 174,000 sq. ft. Project Tech Building 2. Like building 1, building 2 included features important to cybersecurity operations including fully redundant power and telecommunications connectivity.

Will Garrett, Vice President of Cybersecurity development at Port San Antonio, said the Project Tech Building 2 was leased in less time than the first building, a clear sign of the opportunity that exists in the space.

Building for Talent and Innovation

In August 2020, the port began constructing a full-spectrum innovation center that will significantly advance the port’s mission to accelerate the pace of American ingenuity. The new building will span 130,000 square feet representing an investment of approximately $60 million. Construction is expected to begin in early 2022.

“From a site selector standpoint, companies say what they’re looking for 1, 2 and 3 is talent, talent talent,” Garrett says. “That’s the impetus and motivation for our new innovation center.”

The upcoming space will be a leading destination that engages hundreds of thousands of people annually from throughout the region, across the country and around the world. They will include competitors and spectators of major esports events; students and their families participating in entertainment, cultural and learning experiences; and leading experts who will use the facility to collaborate while they create, showcase and sell their latest technological innovations. Additionally, the innovation center will increase the reach of innovative learning experiences that inspire and educate people — from K-12 students to working professionals — and guide them toward career and entrepreneurial pathways involving the tech breakthroughs originating in the region.

“Everybody that has a computer on their desk has to worry about an adversary exploiting vulnerabilities.”
— Fred Ramirez, Principal, CNF Technologies

Another key component to the talent equation, the San Antonio Museum of Science and Technology has become an essential partner in inspiring the next generation of tech professionals. The museum recently launched a new public, security operations center that allows visitors to engage in cyber threat simulations. Programs like this give students hands-on experience combating simulated cyber threats.

Safe Base of Operations

Lockheed Martin, the largest defense contractor in the U.S., was the first company to launch operations in Project Tech Building 1 secure facility for cybersecurity operations in March 2019. The site is located directly across the street from the headquarters of the 24th Air Force’s Cyber Command.

“Being co-located is important,” said Lockheed Martin Vice President of Spectrum Convergence Deon Viergutz. “This will be an innovative environment that we envision over the coming years will be a place where Lockheed Martin and our customers are able to come together to collaborate in a single place where the mission is executed.”

Lockheed Martin’s Port San Antonio site houses two of its cybersecurity divisions: Spectrum Convergence and Cyber Solutions.  The company strategically designed its space to accommodate clients across both realms in conducting cyberwarfare exercises to test potential scenarios for offensive and defensive cybersecurity training. Among the tools under development at Lockheed Martin’s new site will be HenosisTM, the company’s prototype for the U.S. Air Force’s Unified Platform.

“We’ve seen a significant increase in the cyber mission and demands from our customers,” adds Viergutz. “We are counted on to address the most complex offensive and defensive challenges that our customer faces.”

CNF Technologies, founded in San Antonio in 2005, is opening its second facility at the port. One of the city’s largest software developers and fastest-growing cybersecurity providers, CNF Technologies primary clients are government agencies, law enforcement and counterintelligence operations.

“Everybody that has a computer on their desk has to worry about an adversary exploiting vulnerabilities,” explains CNF Technologies Principal Fred Ramirez. “We have a spectrum of services that we provide, such as reverse engineering, certification accreditation and penetration testing. And our personnel is also co-located with our clients as they monitor the military’s largest networks.”

“We have a niche in cybersecurity,” adds CEO Roxanne Ramirez. “That’s all we do.”

Recently, CNF Technologies partnered with the University of Texas at San Antonio (UTSA) as the institution establishes its National Security Collaboration Center (NSCC), which will advance research, education and workforce development in cybersecurity, data analytics and cloud computing. Along with the Port, the NSCC is a vital cog in bolstering the region’s status as a tech and cyber epicenter.