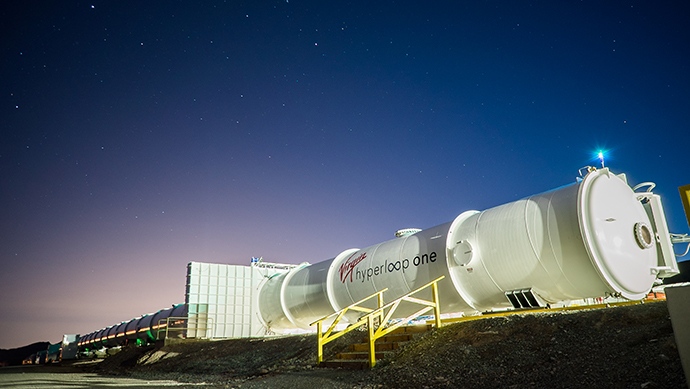 Virgin’s Hyperloop One transport system proposes to allow travelers to go between Las Vegas and Los Angeles in 30 minutes. The company’s testing ground is located at Apex Industrial Park in North Las Vegas.
Photo courtesy of Virgin
by ADAM BRUNS

In 2018, Nevada was the place where legendary California machine tool firm Haas Automation installed its 200,000th CNC machine, at Vineburg Machining in the capital of Carson City. But Haas harbored even bigger Nevada dreams.

In June the largest machine tool builder in the western world was approved for $10.5 million of sales tax, modified business tax and personal property tax abatements from the Nevada Governor’s Office of Economic Development for a new 2.3-million-sq.-ft. manufacturing and distribution complex it plans to build in the booming Las Vegas suburb of Henderson. The investment comes via PEGH Investments, whose majority owner is Gene Haas, also the owner of Haas Automation. The Henderson City Council in February 2019 approved a $27.4 million land deal for the overall project. The company intends to invest $200 million in the warehouse, manufacturing offices and showroom space. Phase two of the project includes construction of up to 20 buildings, depending on demand, followed by a third phase including tentative plans for retail space, warehouse space, and some flex-building uses.

The incentives application from the company states that Haas intends to hire as many as 500 within two years, and 1,400 within five years. In a letter supporting the incentives application, Michael Walsh, vice president of economic development for the Las Vegas Global Economic Alliance, notes that the new hires will make an average hourly wage of $28 and that Haas will make capital equipment purchases of $100 million within the first 24 months of operations, meaning a grand total of more than $327 million invested in land, buildings and equipment.

“Recent strategic planning has the company focused on creating a presence in Nevada,” writes Haas Automation CFO and General Manager Robert Murray in the application’s cover letter. “A big part of this consideration is the economic incentives offered by the state. A review of our operating costs has shown that we will have lower operating costs in Nevada than we have at our headquarters in Oxnard, California.

“The economic development incentives offered by the State of Nevada have been an integral factor in our decision-making process to locate our operation here in the state,” he continues. “Haas Automation, Inc. has examined multiple locations throughout the United States.” According to the application, the company was also considering North Carolina, Texas and Louisiana for the facility.

“Ultimately, after much due diligence and economic feasibility analysis, we chose Nevada for its overall incentive package and pro-business climate,” wrote Murray. “Our experience with representatives from the Las Vegas Global Economic Alliance has been positive and we look forward to your approval of our application to assist us with our efforts to expand in Nevada.”

“Our goal is to do business in a state that provides favorable conditions for efficient manufacturing, allowing us to compete successfully with competitors in countries with lower wage costs (primarily China and Korea),” the company explained in a section asking it to characterize the importance of the incentives. “The tax and regulatory structure is part of the overall business climate that we seek; thus, the abatement program is a key element.”

That same section asked the company to rate 10 site selection factors from very low importance (1) to very high importance (5). Here’s how one of the most advanced advanced manufacturers in the world responded, grouped by importance:

Which makes their choice of Southern Nevada an endorsement of its standing where those criteria are concerned.

“These investments represent an important step in the growth of the local manufacturing and technology sectors and diversification of the Southern Nevada economy,” wrote Henderson Mayor Debra March in a supporting letter. “We are very proud to support Haas’ investment in Henderson and look forward to the significant positive economic impact that this project will provide our community and the region for generations to come.”

More Where That Came From

Half of the 10 companies approved for incentives at that same June meeting where Haas was approved were in Greater Las Vegas. Among them:

Between 2010 and 2018, the Las Vegas-Henderson-Paradise metro area saw manufacturing jobs grow by more than 26% to nearly 25,730. Workforce analysis by Emsi finds that those jobs pay an average salary of $69,360.

The Center on Education and the workforce at Georgetown University’s McCourt School of Public Policy, in its June 2019 “The Way We Were” report on historical manufacturing trends, found that Nevada, like many states, has seen its manufacturing footprint shrink. But Clark County (the home county of Las Vegas) saw it grow by 11,862 jobs between 1990 and 2016. That’s one of the highest county-level gains in manufacturing jobs in the nation.

These programs, organizations and institutions add value and provide support to advanced manufacturers in Southern Nevada: Nevada Industry Excellence (NVIE, found at www.nevadaie.com) is part of the national Manufacturing Extension Partnership network. The College of Southern Nevada’s Division of Workforce & Economic Development was established in 2005. The school (www.csn.edu) has partnered with the Clark County School District to develop a workforce training partnership that affords both high school students and adult community members access to the skills needed for advanced manufacturing.

Established in 1980, the Nevada Manufacturers Association (NMA, at nvmanufacturers.org) represents the interests of the roughly 3,000 small, medium, and large manufacturing and warehousing businesses around the state.