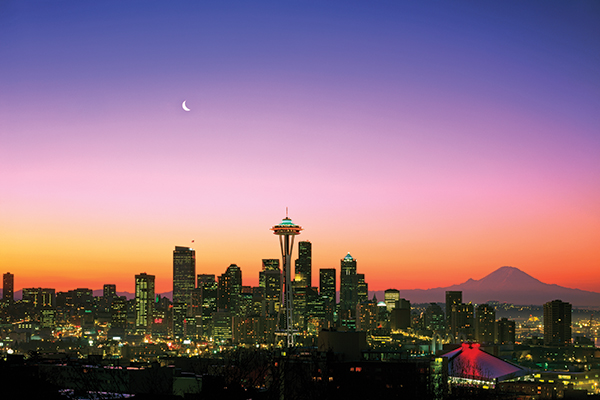 Among the nation’s 100 largest metro areas, Greater Seattle is No. 6 in percentage of Asian-American residents, and No. 3 percentage of people identifying as multiracial.
Photo: Getty Images
by Adam Bruns

Washington’s diversity runs as deep and wide through its history and economy as the Columbia River runs across its landscape.

The U.S. Census Bureau’s Diversity Index measures the probability that two people chosen at random will be from different race and ethnicity groups. With a Diversity Index score of 55.9%, Washington is the 20th most diverse state in the nation. Nine counties have a score of 50% or higher, topped by King County (Seattle) at 64.6%, which ranks the county 98th out of 3,143 U.S. counties.

The University of Washington Center for Studies in Demography and Ecology (CSDE) states its mission in its name: Linking the effects of population and natural ecosystem on one another. By extension, one could say the ecosystem’s biodiversity and the population’s racial, ethnic and nationality diversity reflect one another too: The richer the mix, the more dynamic and varied the growth becomes.

Asked about the state’s historic ties to Asia in particular, Sara Curran, director of the CSDE, notes that the region’s ties to East Asia go back more than 100 years, with Southeast Asian communities beginning to arrive in greater numbers about 50 years ago, many arriving as refugees to find a number of welcoming initiatives in the state. For generations, students from Asian countries have come to the region to finish high school and go on to college, mostly through student visas, she says. “In more recent years, there has been more of a tech draw from South Asia and East Asia, with mostly expats transitioning to being card and residency holders.”

Curran observes that the main driver for growth in Washington’s population has been in-migration, with about half of that coming from foreign countries. And she says universities such as hers, with organized, well-engaged communities of color and of various affiliations such as Native American and Asia Pacific Islander, can be catalysts.

“It would be a good idea for corporations to reach out to those departments, programs and student groups,” she says. “It would be a very fruitful way to make connections with those communities. For example, we have a whole department in American Indian Studies, and a minor in Oceania and Pacific Islander Studies. There is an entire school of International Studies [the Henry M. Jackson School of International Studies] with groups of heritage communities all connected to communities here in Washington.”

“Migration and immigration is a really important part of our state’s population,” says Mike Mohrman, Washington’s state demographer, working within the state’s Office of Financial Management (OFM). “Look at the number of companies importing tech talent and farm labor. It’s vital to our economy we import this talent.”

Many Eggs, Many Baskets

As the profiles of Washington’s nine key business sectors demonstrate elsewhere in this guide, the diversity of Washington’s population and natural ecosystem finds an apt parallel in the state’s complementary array of industries.

And with companies as with people or species, that diversity breeds strength.

Look no further than the 2020 Manufacturing Scorecard produced by the Center for Business and Economic Research (CBER) at Ball State University. One of the nine metrics employed by this annual publication is sector diversification, where Washington is one of only five states in the nation to receive an “A.” (It also receives an “A” in human capital.)

“States that concentrate their manufacturing activity in a single sector are more vulnerable to changes within that specific sector, including changes in employment and income as demand for specific goods change,” notes the CBER. “Policies that seek to diversify the economy are typically pursued in concert with efforts to strengthen the supply chain of existing industries.”

Diversification applies to metros as well as states. In spring 2021, WalletHub compared the 501 largest U.S. cities across three key metrics: industry diversity, occupational diversity and worker-class diversity. Federal Way, Washington, a city of approximately 100,000 within King County and the Seattle metro area, was No. 5 in the nation in industrial diversity and No. 51 overall. Situated 25 miles south of downtown Seattle and eight miles north of downtown Tacoma, the city was just incorporated in 1990, and boasts a demographic profile nearly as diverse as its business makeup.

Federal Way led the way, but wasn’t alone among Washington cities high in industrial diversification. A total of six made the top 100 (overall ranking in parentheses):
Tops in Industry Diversity

In the past five years alone, the Conway Data Projects Database has tracked 17 major corporate facility investments across Vancouver, Everett, Renton and Yakima alone, including a $32 million investment by Bellevue-based longhaul truck maker  Paccar in Renton; a long list of manufacturing and distribution projects in Vancouver from the likes of The Home Depot, Printforia and Maruichi American; and a new headquarters, manufacturing and distribution site from electric aviation company magniX in Everett completed earlier this year.

Featuring over 40,000 square feet, magniX’s new facilities consolidate all of its Australia and Redmond operations under one roof to be home to the global headquarters, engineering, manufacturing and testing of its electric propulsion systems. CEO Roei Ganzarski said the company “continues to make tremendous progress toward revolutionizing commercial aviation and our new facility is a representation of that progress. I am excited to see efficient and clean electric aircraft propulsion systems of varying power ranges coming out of this facility and heading to customers.”

The company’s multiple activities on site and its business development across more than one sector demonstrates it pays to be an industrially diverse company too — albeit one firmly planted in a longstanding seedbed of innovation.

“Washington’s century-plus of aerospace innovation creates an exceptional environment for developing and piloting new technologies,” said Lisa Brown, director of the state Department of Commerce, at the company’s opening in January 2021. “Additionally, we are aggressively addressing climate change by embracing clean energy throughout our transportation sector, from vehicles to trucks, to ferries and aircraft. magniX is the leader in the development of electric aircraft motors, and we are thrilled they have chosen Washington as their initial manufacturing location.” 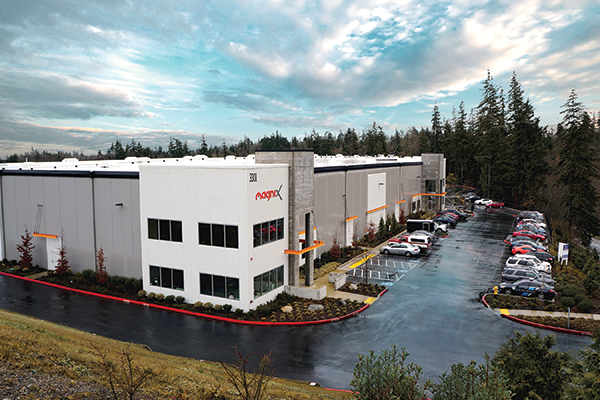 Electric propulsion company magniX opened a new global headquarters, engineering, manufacturing and testing facility in early 2021 in Everett, Washington, among the top 10% most industrially diverse cities in the nation according to WalletHub.
Photo courtesy of magniX