Pioneers From The Beginning 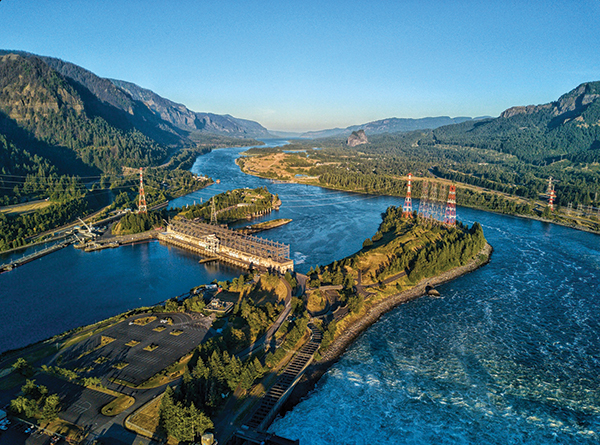 Bonneville Dam, located at the Washington-Oregon state line in the middle of the Columbia River, exemplifies the regional collaboration in renewable and clean tech.
Photo by Rafael Kaup’s courtesy of 2019 “Make a Splash” photo contest sponsored by the U.S. Department of Energy’s Water Power Technologies Office
by Adam Bruns

The 2020 National Solar Jobs Census from the Solar Energy Industries Association ranks Washington No. 20 in solar power industry jobs with 3,565, with a five-year solar jobs growth of more than 1,300 jobs that places the state No. 13 in the nation.

That’s a pretty sunny outlook for a state with a reputation for clouds.

It’s just one part of an overall sustainability focus that’s been synonymous with Washington for some time. Congress created the Bonneville Power Administration (BPA) in 1937 to deliver and sell the power from Bonneville Dam, which had been constructed pursuant to a 1932 campaign promise by Franklin Roosevelt that “the next great federal hydroelectric project would be built on the Columbia River to prevent extortion against the public by the giant electric utility holding companies then dominant in the region,” according to the BPA.
Fast-forward to 2021, which saw the state rank No. 6 in the nation in 2021 in Site Selection magazine’s annual Sustainability Rankings. The rankings are based on factors as various as LEED-certified projects, green incentives and laws, well-being, renewable power generation, high corporate social responsibility ratings for companies in the state and the influence of corporate facility projects within a green industry.

In Washington’s case, that amounted to more than 90 projects tracked over three years in industry sectors defined by the U.S. Bureau of Labor Statistics as having clean-tech and green industry growth potential. One of those sectors, of course, is solar energy. And one of those projects helping Washington to its high sustainability ranking is Silfab Solar.
The company in early 2020 joined officials from the Washington State Department of Commerce and the Port of Bellingham to announce an investment of at least $4 million to add manufacturing equipment in order to address growing demand for Silfab’s American-made ultra-high-efficiency premium monocrystalline photovoltaic (PV) modules. In September 2021, the company made a second investment in Burlington to significantly expand Silfab’s US solar production and supply chain footprint, and service the growing consumer appetite for American-made, premium-quality solar panels.

“Clean electricity is the foundation of Washington’s clean energy economy,” said Gov. Inslee. “Silfab’s leadership will help us build the cleanest energy grid in the nation and realize our goal of 100% clean electricity by 2045.”

Clean energy is a subset of the state’s robust clean technology sector, which includes 100+ companies, possessing 195 patents serving more than 12 industrial sectors.
“Silfab remains committed to ongoing investments to improve product innovation and increase our footprint of quality manufacturing within the U.S.,” said Paolo Maccario, CEO of Silfab Solar. “Silfab supplies some of the best solar companies in the United States. This support from the state of Washington and Port of Bellingham will further increase Silfab’s solar production to deliver premium U.S.-made solar modules to meet our partners’ growing demand.”

“The Port of Bellingham is thrilled to see continued job growth and investment in the Waterfront District’s clean tech innovation hub,” said Port Commission President Michael Shepard, calling the expansion a great example of collaboration among local governments, the private sector and higher education. Whatcom County — the Bellingham waterfront in particular — is a developing hub for clean energy research, innovation and manufacturing. Current partners include the Western Washington University Institute for Energy Studies, which offers the first degree in energy studies in the state. Silfab is also contracted with the University of Washington Clean Energy Test Beds for testing of its new U.S.-made products to be exported around the world.

Also present at the Silfab announcement was Washington Commerce Director Lisa Brown, who noted, “The transition to a low-carbon economy is a tremendous opportunity for innovative companies. There is no trade-off between the environment and jobs.”