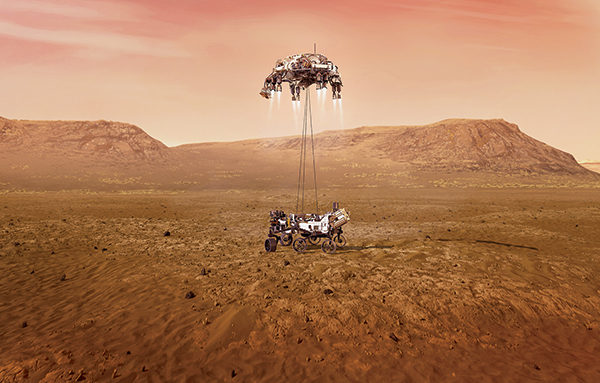 Artist representation of the Perseverance Rover landing on Mars with the aid of a specialized drone. Rendering courtesy of NASA, Aerojet Rocketdyne
by Savannah King

Gradatim Ferociter” is a Latin expression translated as “Step by Step, Ferociously.” This phrase is the company motto for Jeff Bezos’ Blue Origin. The simple phrase captures the company’s ambitious approach to conquer seemingly impossible goals.

When Bezos made his historic journey into space aboard the New Shepard in July, it was at once the culmination of milestones and the first step into a new future — where commercial space travel is possible.

This latest major step forward — and the many that lead up to it — all started in Washington. For nearly 60 years, the state has played a pivotal role in aerospace and the nascent field of commercial space exploration. In 2018, the Teal Group identified Washington state as the No. 1 state in its Aerospace Competitive Economics Study. The report highlights Washington’s high score in a variety of ranking factors including economy, industry, labor, education and cost. The state also ranked highly in the methodology for Risk to Operations, Research and Innovation and Taxes and Incentives.

Washington is home to more than 100 space-related companies including Boeing, Aerojet Rocketdyne, Blue Origin, SpaceX, Spaceflight Industries, Tethers Unlimited and many others. Washington’s unique blend of startups and legacy companies employs approximately 6,200 workers and generates $1.76 billion in economic activity across the state. Additionally, the state is home to more than 1,300 aerospace-related companies making everything from nuts and bolts to navigation systems.

The industry presence has only continued to grow in the state in recent years with several major advancements and investments taking place in the state.

In January 2020, Blue Origin opened its new headquarters and R&D facility in Kent, Washington, just outside of Seattle. The company broke ground on the facility in January 2019 and was completed in 11 months. Sitting on 30-acres, Blue Origin will use 13 of those acres for wildlife habitat and flood storage. Approximately 1,500 people will be employed at the headquarters.

Blue Origin’s rival and neighbor, SpaceX, is also growing in the region. In April 2021, SpaceX expanded its presence in Redmond, where it will develop Elon Musk’s Starlink satellite constellation that promises to deliver broadband internet to the globe, requiring only a small satellite dish. SpaceX currently has about 1,300 Starlink satellites in orbit. The company has been authorized by the Federal Communications Commission to deploy as many as 12,000 of the satellites.

“Landing on Mars is hard. The planet has an atmosphere but it is too thin to slow the spacecraft down enough for a safe landing, and that is where Aerojet Rocketdyne propulsion comes in,” said Aerojet Rocket-dyne CEO and President Eileen P. Drake.

“Aerojet Rocketdyne’s innovative and reliable propulsion has been a part of every successful NASA mission to Mars since the Viking program in the 1970s.” 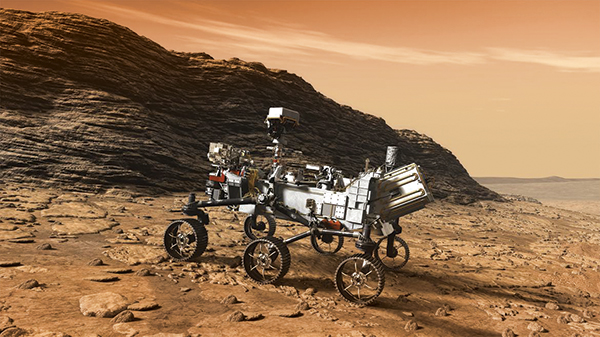