Wisconsin’s governor says pro-business reforms have paid off handsomely for the state. 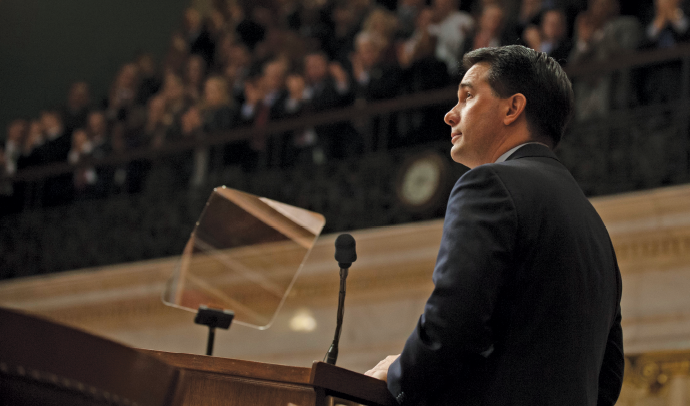 When you’ve won three elections for the same office over four years, you probably know a thing or two about frank communication.

In the case of Wisconsin Gov. Scott Walker, winning two gubernatorial elections and beating back a recall challenge are just par for the course. He is a straight-talking, no-nonsense leader who lets his public policy results speak for him.

In a recent interview with the Wisconsin Economic Development Guide, Walker shared his thoughts on what it took to turn his state’s business climate around.

Of all the public policy initiatives you have pushed to improve Wisconsin’s overall business climate, which ones do you think were the most effective?

Governor Scott Walker: Clearly, our efforts four years ago to stabilize the state government were the most impactful. Businesses from surrounding states like Illinois have moved into our state because of our stability. We had made promises and businesses now know that we can fulfill those promises. Also, our production tax credit will be 7.5 percent by 2017, and it wipes out almost all of the tax liability for manufacturers and agricultural companies.

How is Wisconsin in better fiscal shape today than it was when you took over as Governor?

WALKER: It really is. I inherited a $3.6-billion budget deficit in 2010. We have finished each year since with a cash surplus. For the budget I just presented for the next two years, it ends up with a structural surplus of $499 million. Our pension is the only one fully funded in the country. In 2010, our unemployment rate was 9.2 percent. Five years later, it is down to 5 percent.

How did you get Wisconsin to become a Right to Work state? What will this policy change do for your state’s overall competitive position in the marketplace?

WALKER: We laid the foundation four years ago when we passed Freedom to Work and Freedom to Choose in the 2011 legislative session. This year I have Scott Fitzgerald and Robin Vos to thank in the Legislature. They got the votes lined up in the Legislature. We turned it around and signed Right to Work into law on March 9. I laid the foundation as part of our overall reforms for our public employees. Plus, with the recent changes in Michigan and Indiana, with both of them adopting Right to Work, the pressure had been building on Wisconsin to follow suit. After talking to site selectors, it is not the only issue, but increasingly whether you have the freedom to work is one of the top things on their list.

Change is a good thing. One local company here just outside Milwaukee announced a new line being put in there that same day I signed Right to Work into law. The CEO of this firm said he chose to do it here and now because of our Freedom to Work legislation. In manufacturing and similar industries, it is a pretty big concern. Lowering the tax burden and easing the regulatory climate, investing into worker training and higher education — overall, these reforms collectively have been very positive.

What fact about Wisconsin do you wish people outside your state knew?

What do you want your legacy to be following your tenure as Governor?

“I inherited a $3.6-billion budget deficit in 2010. We have finished each year since with a cash surplus.”
— Scott Walker, Governor of Wisconsin

WALKER: When I first started in 2009, my wife and I sat down and talked about it and prayed about it. We were worried back then that our sons would grow up in a state that was not as good as what we grew up in. Four years later, we have fundamentally turned things around. The state unemployment rate is down. New business ventures are up — more than 32,000. Graduation rates are up, and ACT scores are second best in the country. The economic stability we offer and the reforms we’ve passed will far outlast my tenure in office. As a result, this is now a much better place to live.

What are your administration’s three top priorities for economic development this year?

WALKER: Keeping costs down; continuing with property tax relief; maintaining the production tax credit for manufacturing and agriculture; ensuring a reasonable regulatory climate; and investing into our workforce are all our top priorities. We will also continue to invest in infrastructure — roads, rail, ports, airports and broadband.

How competitive is Wisconsin’s regulatory environment right now? Are there any aspects of it that need improvement?

WALKER: It is much better today than it was four years ago. Our goal was to go out and practically work with property owners up front in a way that protects our resources but also in a way that keeps costs down. We have been much more customer-focused rather than waiting until things go wrong. We are pushing for continuous quality improvement. 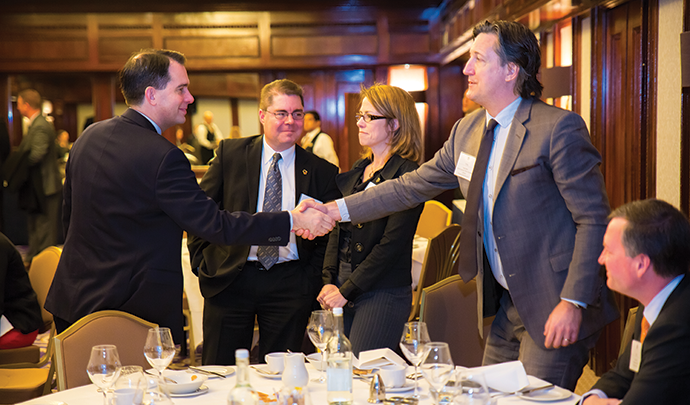 Wisconsin Gov. Scott Walker, who has already won three elections over the past four years, knows a thing or two about the power of persuasion.
Photo Courtesy of  Wisconsin Economic Development Corporation