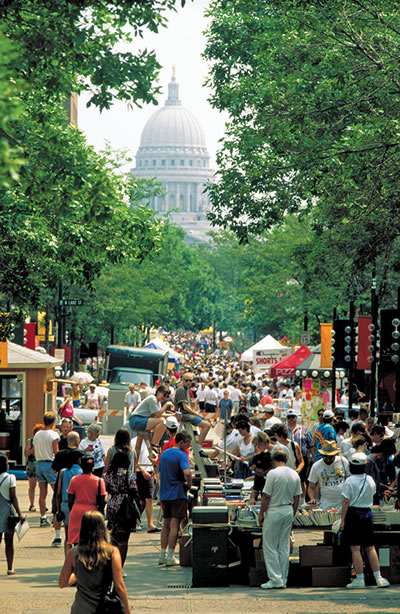 The Wisconsin State Capitol in Madison often serves as the backdrop for street festivals and other special events.
Photo courtesy of Madison Region Economic Partnership

Regional partnerships in Wisconsin work to grow jobs and industry.

From Madison to Milwaukee and from Green Bay to Eau Claire, regional partnerships form the backbone of Wisconsin’s economic development efforts.

While the Wisconsin Economic Development Corporation provides top-level leadership and guidance from the state capital, deals are ultimately done on the ground by the professionals who work in the trenches.

The Wisconsin Economic Development Guide recently engaged the leaders of the Madison Region Economic Partnership; M7 Community Development; The New North; and Momentum West — four of the state’s nine regional partnerships ­— in a series of wide-ranging interviews that offer insight into how the state’s key power brokers get the job done at the local level.

Not Just Mad Science in Madison

Paul Jadin, president of the Madison Region Economic Partnership, says the capital region of Wisconsin is widely known as a bastion of information technology (IT) and life sciences. What many outside the region may not know, he says, is that the area’s technical college system also ranks as one of the nation’s best.

It’s not just University of Wisconsin graduates who are changing the world of IT and life sciences, notes Jadin. Highly educated kids coming out of technical schools in the region are making their mark too.

“We have a very strong technical college system,” says Jadin. “Madison College is the biggest, but Southwest Tech is very influential here as well. Our Inspire Wisconsin program is an initiative to help guide high school students into the best careers. It uses mentors to help young people make the right decisions about their future. Our K-12 through university community are all on the same page regarding curriculum needs and giving young people career guidance at an early age.”

Many of these graduates go on to work for leading employers in the biotech and healthcare fields. Epic and Exact Sciences are two such companies currently expanding in the region.

“We start every conversation with the University of Wisconsin. It is an extraordinary asset for the entire state and region.”
— Paul Jadin, president, Madison Region Economic Partnership

“Epic is a large medical software company that continues to grow here,” says Jadin. “Exact Sciences — a producer of a breakthrough colorectal cancer detection device — has announced that it will create 750 new jobs over five years. The FDA approved their device last year, and this could lead to over 1,000 employees in the Madison area someday.”

With a little over 1 million people in the area, the Madison region competes against Austin, Boston, San Francisco and Seattle for IT projects, says Jadin. “We also compete against other Big Ten communities — Ann Arbor, Columbus, Champaign, etc. — for regional projects. We start every conversation with the University of Wisconsin. It is an extraordinary asset for the entire state and region. It goes directly to the issue of having a talented workforce. The density of entrepreneurs and innovators that we have here in the Madison region is unparalleled. For many Midwestern communities, brain drain is their number one problem. That is not the case here. In fact, most of our graduates want to stay here.”

Brewing Up Jobs in Milwaukee

Pat O’Brien, executive director of M7 Community Development, says the Greater Milwaukee region enjoyed one of its best years ever in 2014. “It was another strong year for development activity and new project announcements, especially in Kenosha County, where Niagara Bottling and Kenall manufacturing broke ground on new facilities,” he says.

“ULINE has announced major expansion plans, and FNA Group and Quest Products relocated to the county. Together, these projects are bringing more than 2,000 family-supporting jobs and adding more than $330 million in capital investment to the region,” O’Brien says.

In May 2014, the Milwaukee region received a special designation as a “Manufacturing Community” by the federal Investing in Manufacturing Communities Partnership (IMCP) program. Out of the 75 communities that applied, 12 were selected based on the strength of their economic development plans, the potential for impact in their communities, and the depth of their partnerships across the public and private sectors to carry out their plans.

“Earning the IMCP designation is recognition from the White House and other federal agencies that the Milwaukee Region plays a critical role in the future of manufacturing in this country,” says O’Brien.

The M7 Next Generation Manufacturing (NGM) Council aligns its strategies with the IMCP program elements identified as critical to vibrant industrial ecosystems, such as workforce and training, supplier networks, research and innovation, and trade and international investment, notes O’Brien.

“Manufacturing is the very heart of our region’s ladder of opportunity,” he adds. “Manufacturing provides a large number of well-paying jobs, with wages 31 percent higher than the regional average.”

“Extracting silica sand that is used in hydraulic fracturing has undergone explosive expansion in our region,” Jahn says. “This has been a key part of the oil and gas expansion in the US. We have seen phenomenal growth in that industry, and it has led to growth in our rail transportation infrastructure. We have also seen an expansion of our electric and natural gas infrastructure, adding to our tax base and job creation too.”

The second major trend in Western Wisconsin, notes Jahn, is the “very positive upward growth in value-added agriculture and that whole supply chain. In terms of logistics, we are very close to the Twin Cities metro market, as we are right across the border with Minnesota.” 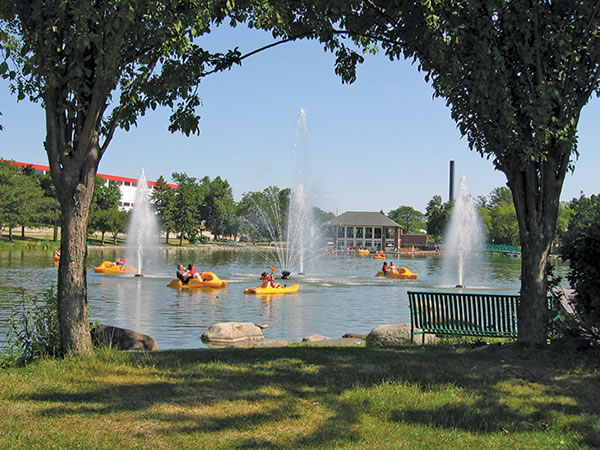 Beloit earned its designation as a Tree City in Rock County in 1987.
Photo courtesy of Wisconsin EDC

Anchored by Eau Claire, western Wisconsin is also home to such cities as Menomonie, River Falls and Hudson. “We build the world’s fastest supercomputer in our region,” says Jahn. “Advanced manufacturing is a key cluster here. We are incredibly good at making things here in a precision sort of way — in metals, plastics, tool and die and machining.”

“We also have an emerging cluster in the software arena,” Jahn adds. “We have 40,000 higher education students at schools in our region. Our three UW schools — UW-Eau Claire, UW-Stout and UW-River Falls — are all very unique. Eau Claire is a regional liberal arts university with a strong emphasis in material sciences and computer sciences. Stout is Wisconsin’s primary polytechnic university, and River Falls is our food and agriculture school.”

Packing in the Manufacturers

The Green Bay-Appleton-Oshkosh region of Wisconsin may be well known for its diehard Green Bay Packer fans — often affectionately called “Cheeseheads” — but the meat and potatoes of The New North is its robust base of industrial manufacturing jobs.

Murphy notes that “24 percent of our GDP in the region comes from manufacturing, and 24 percent of the workforce in our region is in manufacturing. Here in The New North, we have decided to reinvest in our existing workers.”

A key initiative in this regard is the Northeastern Wisconsin Education Resource Alliance (NEW ERA), comprising the leaders of the 13 post-secondary institutions in the region. “It is made up of two-year and four-year schools,” says Murphy. “It is comprised of their C-suite leaders. They have found common ground to leverage the resources of their total balance sheet. Last year they developed three new technical engineering degrees. Students receive their lab training at a technical college, then they go on to a UW institution to complete their four-year degree.” 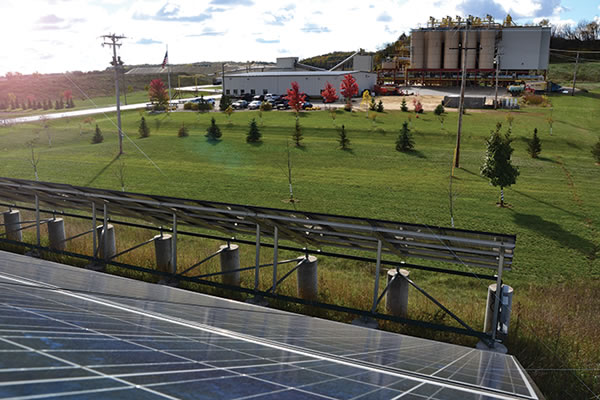 Murphy adds that “this is all about aligning our resources to meet the demand in our workforce.”

Growing the defense industry is also a top priority in The New North, notes Murphy.

“Two large defense OEMs are in this region — Oshkosh Corp. and Merrimack Marine Company,” he says. “We received a multi-dimensional grant from DOD in excess of $2 million for a supply-chain initiative that is focused on meeting the needs of the defense industry. The initiative is intended to round out the spikes and valleys in the workforce that serves the supply chain for defense contractors.”

On the branding side, Murphy says the region will continue to use the slogan, “North of What You Expect.”

“Believe it or not, the history of this area is more aligned around paper-making than it is around cheese-making,” says Murphy. “The nature of the manufacturing base here is very unique and it serves a number of stand-alone industries. Great Northern, Kimberly Clark, Procter & Gamble and Georgia Pacific are all here.

“We have a lot of success stories to share,” says Murphy, “and now is the time to share them.”